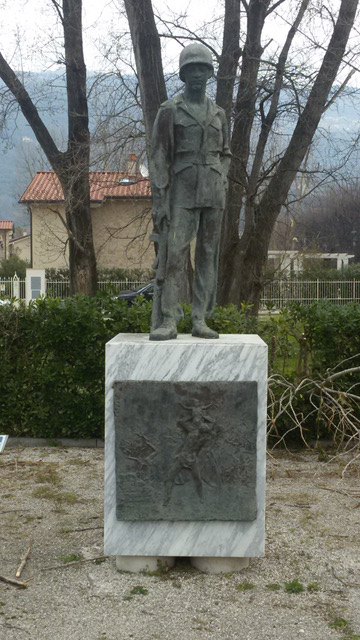 Located in the center of the park.

The monument is a bronze statue mounted on a marble block.

The monument known locally as the Mounumento al Soldato Alleato (Monument for the Allied Soldier) in the Piazza Caduti Linea Gotica (Square of the Fallen of the Gothic Line).

Private First Class Sadeo Munemori was a member of Company A, 100th Infantry Battalion, 442nd Combat Regimental Team, was awarded the Medal of Honor for actions on April 5, 1945 near this site. The 100thBattalion and 442nd Infantry were an all-Nisei (Japanese-American) units. The 442nd was attached to the 92nd Infantry Division (an all black unit in WW2) for the the Operation Grapeshot final push through the Gothic Line.

The American Statesman and US Senator, Daniel K. Inouye, (2nd Lieutenant Company E, 442ndInfantry Regiment) also was awarded the Medal of Honor for his actions near this site in San Terenzo, Italy, on April 21, 1945.

A bit about PFC Munemori from the 100th Battalion Association Website:

Sadao was in one of the first group of replacements for the 100th Infantry Battalion then fighting at Anzio. He left the 442nd in Shelby in April and arrived at the Anzio beachhead a month later and was assigned to Co. A. By then the 100th had been in combat in Italy for nine months, having entered the Italian theater in September 1943 at Salerno Bay, south of Naples. By January, it was engaged in the tremendous battle for Cassino, the town with the towering Benedictine monastery standing guard over the southern gateway to Rome. The beachhead at Anzio was designed as an “end around” maneuver to break the enemy’s grip upon Cassino and that highway to Rome, but the undertaking was going askew in the face of stiff enemy opposition. The 100th suffered horrendous combat losses.

But, on June 5, Rome ultimately did fall into Allied hands. It was after that battle that the 442nd arrived in Italy, at which point the 100th became the 1st Battalion of the larger nisei unit. Three months later the 100/442 was withdrawn from the Italian theater and shifted over to France where they played a heroic role in the rescue of the “Lost Battalion” in the forests above Bruyeres, a little town up near the northeast corner by the Franco-German border. After the battle, Sadao wrote to Yaeko that “the scenery is very beautiful here, but all the beautiful forests remind me of now is terror, destruction and the painful cries of my buddies in agony. We all hate the Nazis over here, but every front line man respects the German soldier because he really is an artist in that line.”

Following several months of light patrol duty in southern France in the Maritime Alps, the 100/442 was pulled out and secretly returned to Italy. General Mark Clark, 5th Army Commander, greeted the return of the 100th to his fold with these words: “You, of all battalions, I pledge, will share in the great victory ahead.” But ahead of that victory lay the enemy’s nigh-impregnable Gothic Line, a defensive barrier built into the northern Apennines mountain range blocking the entrance into the Po Valley. It had repulsed repeated 5th Army assaults for nearly half a year, much as Cassino a year earlier had withstood similar attempts for five months.

But then, in one of the war’s most magnificent assaults upon an enemy stronghold, the 100/442 scaled the mountain heights of the Gothic Line in the early morning hours of April 5, 1945, and reached the top undetected by the enemy. At 0500 hours (5 a .m.) they were in position. Following a massive artillery barrage, they attached – the 100th’s objective.  Hill “Georgia” while other units of the 442d attached “Florida.” With Company A in the lead, the initial push advanced several hundred yards , then faltered as the enemy, recovering from the artillery barrage and the surprise appearance of the Americans, fought back with machine guns and pistols, rifles , and grenades . Although the early morning darkness made the enemy fire inaccurate, their fire nevertheless took its toll . But as one soldier dropped, another took his place and so the attack continued until the hills had been secured. The time was 0532. In the wash of the concentrated attack lay the mangled body of Pfc. Sadao Munemori in a shell crater.

His squad leader injured, Pfc. Munemori had taken charge of the leading squad. With him were Pfc. Akira Shishido of Paia, Maui , and Pvt . Jimi Oda, Ogden, Utah. The following is Pfc. Shishido’s eyewitness account of the ongoing fight: “We advanced nearer the objective until another machine gun opened up right there. Pvt. Oda and I scrambled into a shell crater and Pfc. Munemori crawled back and joined us. The Germans began hurling grenades again. Ten or 12 landed near our crater but we were unhurt by the explosions.”

The machine guns had to be silenced. Munemori crawled out of the hole, then made a one – man frontal attack on two machine gun nests, knocking off both with hand grenades. But as he crawled back into the crater, a grenade bounced off his helmet and rolled into the hole. It would go off before anyone could scramble out, nor was there time to make a grab for it and attempt to throw it out. In that decisive moment, Pfc. Munemori threw his body over the grenade and smothered it by bending his head over his chest and hunching his shoulders so that the blast would not leak out. He was killed instantly. The other two suffered concussions and partial deafness but were unhurt otherwise.

Sadao Munemori was posthumously awarded the Congressional Medal of Honor for “conspicuous gallantry and intrepidity involving risk of life above and beyond the call of duty in action against the enemy.”

About The 442nd Combat Regimental Team from the National Park website:

The 442nd Infantry Regiment - The Most Decorated Unit

The 442nd Regiment of Japanese-Americans would go on to be one the most decorated unit for its size and length of service in the history of American warfare.   The 4,000 men who initially made up the unit in April 1943 had to be replaced nearly 2.5 times. In total, about 14,000 men served, earning 9,486 Purple Hearts.. The unit was awarded eight Presidential Unit Citations (5 earned in one month).1 Twenty-one of its members were awarded Medals of Honor. Its motto was "Go for Broke".  They proved their loyalty to the United States of American in its greatest time of need like no other.

The text is written in Italian on the side of the marble block  and reads:

The Translation in English:

OF THE UNITED STATES

FELL AS A HERO

ON THE GOTHIC LINE IN VERSILIA

HE IS A SYMBOL OF ALL THOSE

WHO SACRIFICED THEIR LIFE

A CALLING FOR PEACE 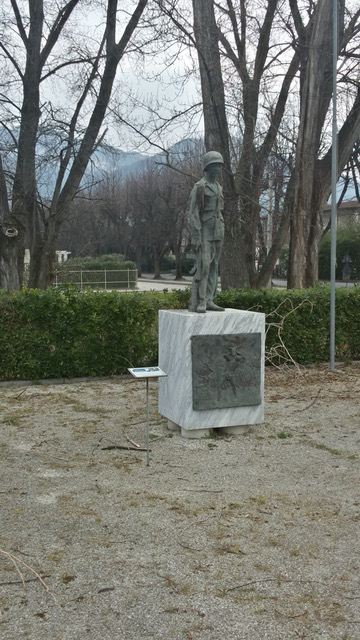 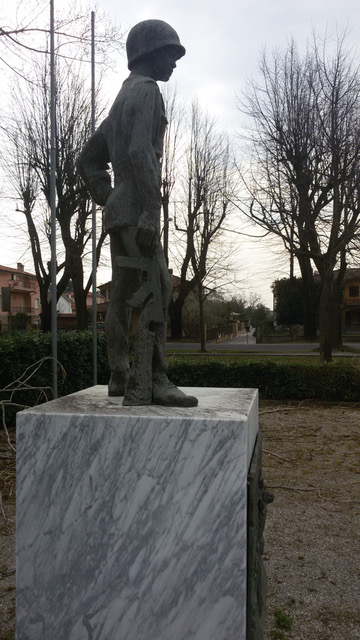 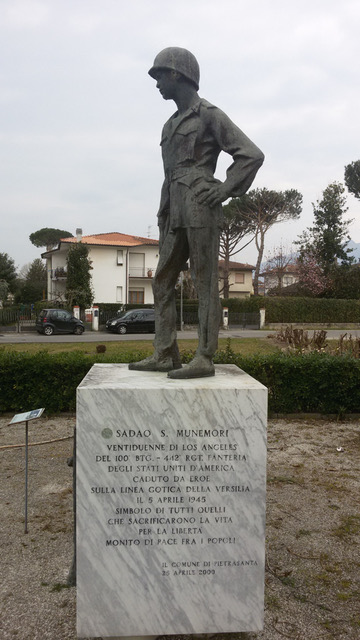 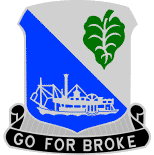 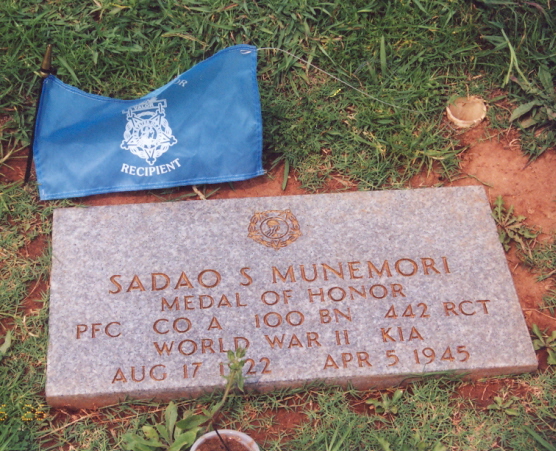 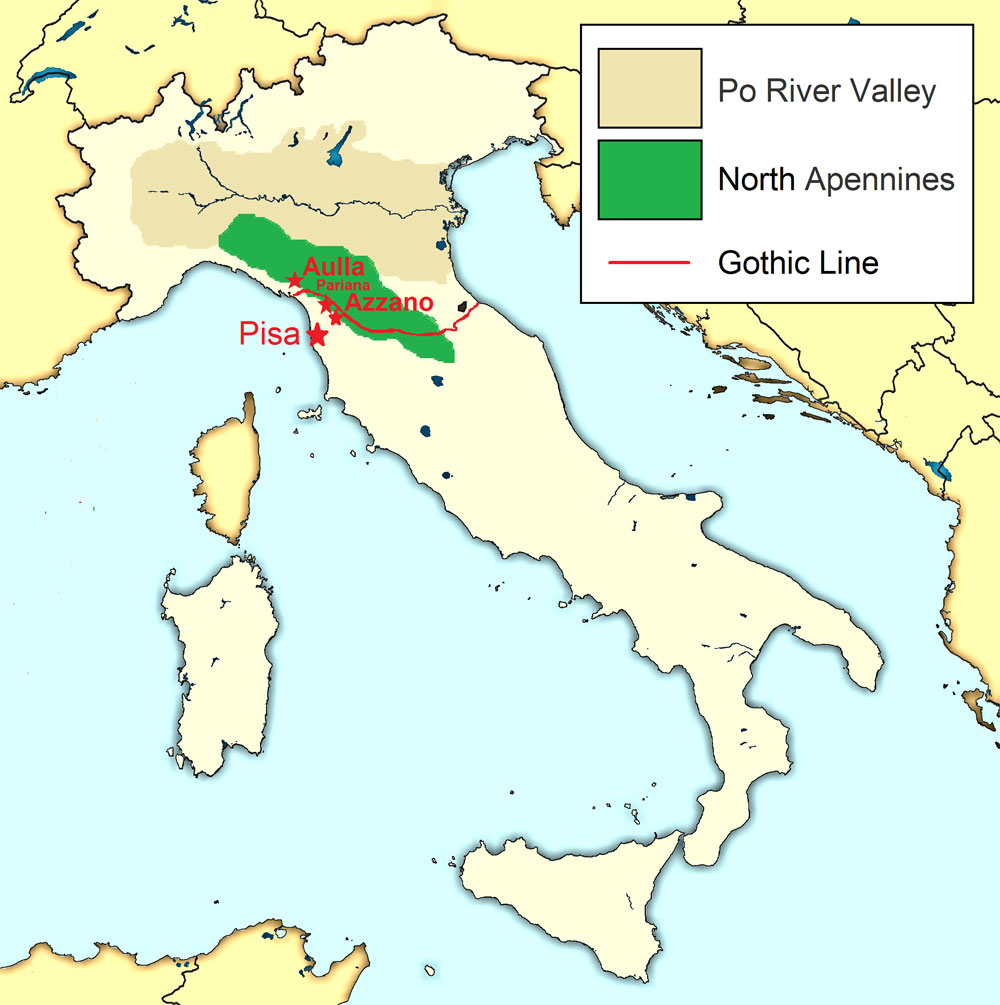