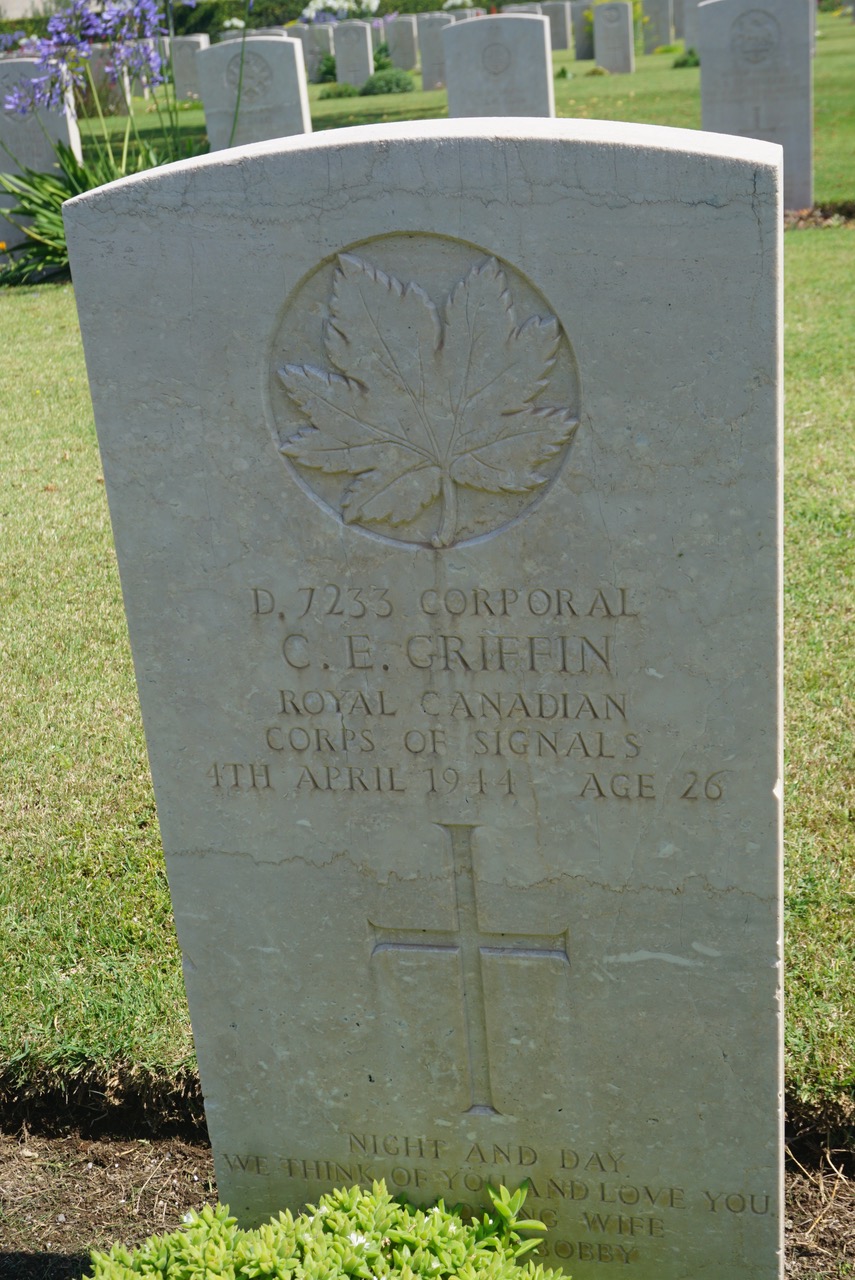 A standard Commonwealth Grave Commission (CWGC) inscribed gravestone.
Charles Edward Griffin was born on January 16, 1920 in Los Angeles, California. He joined the Canadian Army and served in the Corps of Signals in the Canadian 5th Armored Division. He died on April 4, 1944 and is buried in the Commonwealth War Grave commission cemetery at Salerno.
From the CWGC Files:
Corporal GRIFFIN, CHARLES EDWARD Service Number D/7233 Died 04/04/1944
Aged 26
5th Cdn. Armd. Div. Sigs. Royal Canadian Corps of Signals
Son of Arthur Edward and Julia Ellen Griffin; husband of Rose Lilian Griffin, of Ashland, New Hampshire, U.S.A.
INSCRIPTION:
NIGHT AND DAY WE THINK OF YOU AND LOVE YOU. YOUR LOVING WIFE AND SON BOBBY
About the Cemetery from the CWGC: On 3 September 1943 the Allies invaded the Italian mainland, the invasion coinciding with an armistice made with the Italians who then re-entered the war on the Allied side. Allied objectives were to draw German troops from the Russian front and more particularly from France, where an offensive was planned for the following year. Commonwealth and American forces landed near Salerno on 8-9 September 1943 and there was fierce fighting for some days in the bridgehead that they established. The site for the cemetery was chosen in November 1943 and it contains many burials resulting from the landings and the fighting that followed, but graves were also brought in later from a wide area of south-western Italy. The 59th General Hospital was in the vicinity of Salerno at the end of 1943 and early in 1944. Salerno War Cemetery contains 1,846 Commonwealth burials of the Second World War, 107 of them unidentified. One casualty of the First World War is also commemorated in the cemetery by special memorial, his grave in a local civil cemetery having been lost.

(CANADIAN MAPLE LEAF SYMBOL)
D/7233. CORPORAL
C.E. GRIFFIN
ROYAL CANADIAN CORPS OF SIGNALS
4TH APRIL 1944 AGE 26
(SYMBOL OF THE CROSS)
NIGHT AND DAY WE THINK OF YOU AND LOVE YOU. YOUR LOVING WIFE AND SON BOBBY 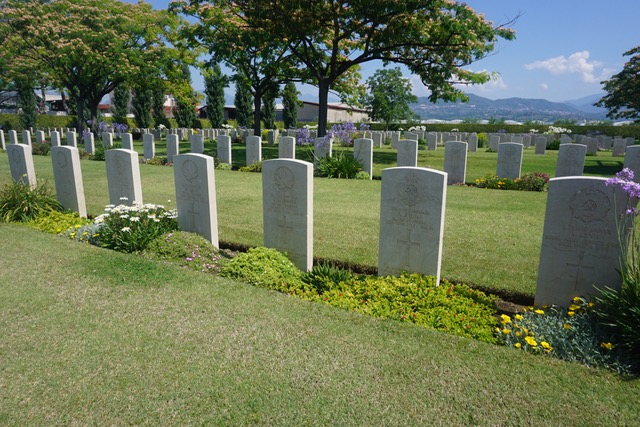