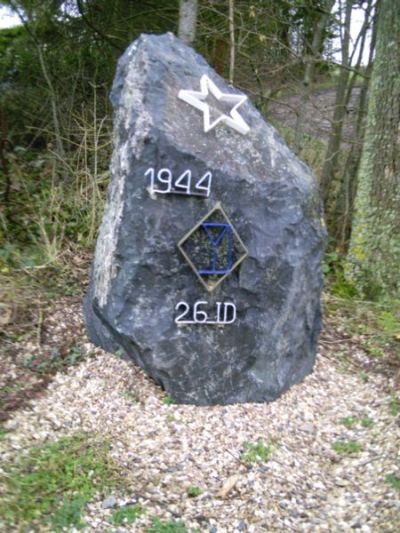 On the east side of the road.

A large, bluish-grey boulder which commemorates the activities of the US 26th Infantry Division in 1944 in the area. A white star is emplaced on the top surface.

On the morning of 8 November the 26th Division attack began, moving with speed and élan much as had been planned. At 0600 the American gunfire lifted. The 104th Infantry drove into Vic-sur-Seille and after a short, sharp fight seized some bridges which the outposts of the 361st VG Division had not completely demolished. At the same time the 2d Battalion of the 101st Infantry (Lt. Col. B. A. Lyons) jumped off to take the Seille bridge at Moyenvic, while the 1st Battalion (Lt. Col. L. M. Kirk) made a diversionary attack toward the east near Xanrey. The Moyenvic assault gained complete surprise. Just before dawn the 101st Field Artillery Battalion opened fire on Hill 310 and then "rolled back a barrage" through Moyenvic as the 2d Battalion attacked. The dazed German garrison yielded 542 prisoners. Company E, stealing forward from house to house, managed to reach the bridge over the Seille before the enemy demolition crew could blow it and crossed the river at once to begin the fight for Hill 310, there joining riflemen of F Company who had swum the river.