<< Back to Diekirch - Caserne Harebierg 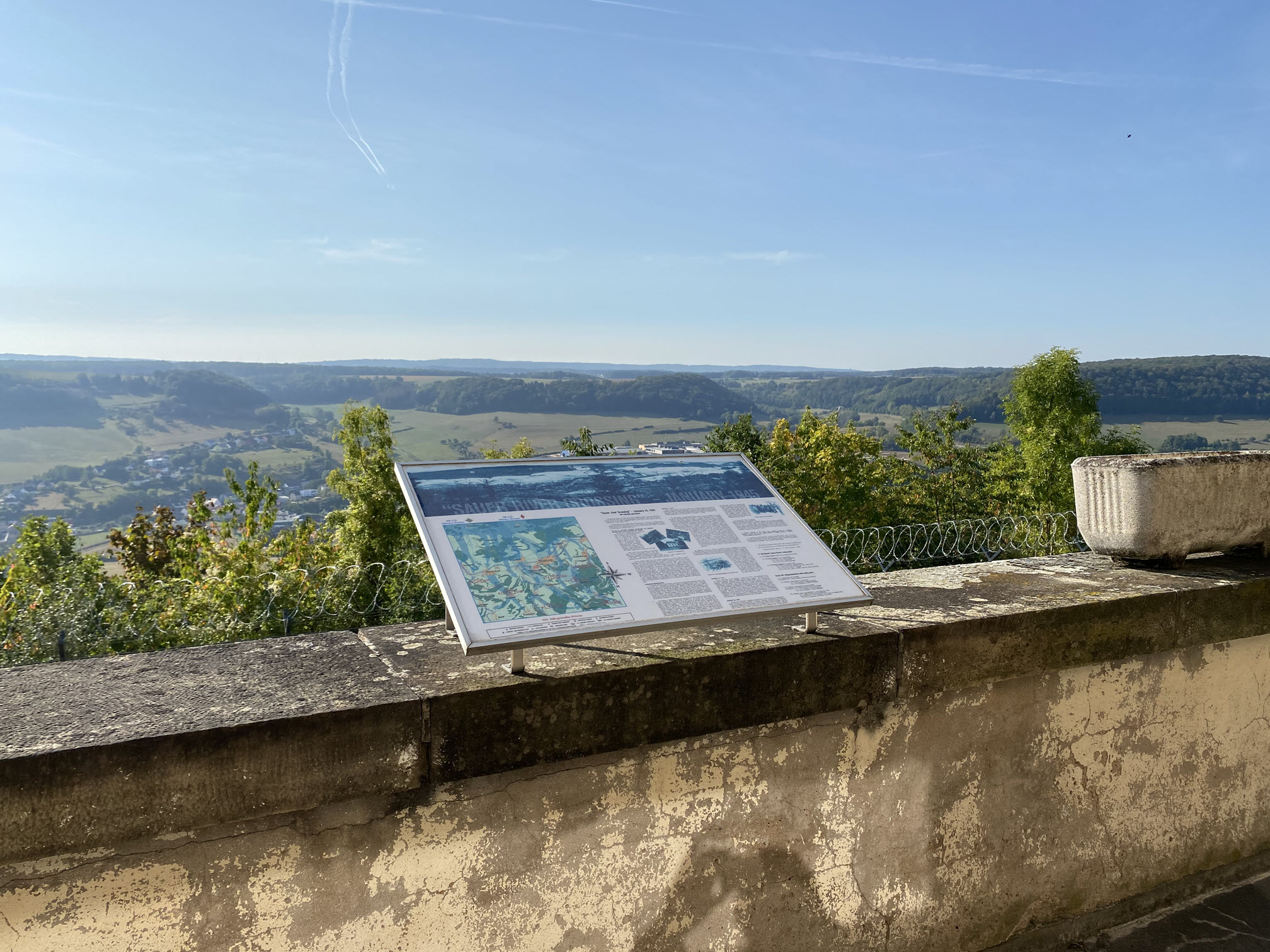 Located on the Luxembourg Army base "Caserne Grand-Duc Jean" overlooking the Sauer River valley. The panel is located on the backside of the first building on the left as you enter the caserne.

NOT ACCESSIBLE TO THE PUBLIC
Plaque Information panel on the Sauer River crossing on January 18, 1945 by the 5th Infantry Division.

The pleasant 'Sauer" or "Sûre" river valley unfolding in front of you and visible from this location extending from the confluence point of the 'Aliens," creek at the entrance of Ettelbruck (far on the right) to Bettendorf (left), was the site of a fierce battle at sub-zero temperatures in late January 1945.

The detailed map with tactical signs of the American- and German units then present, reflects the situation of the January 18-21, 1945 "Sauer" river crossing operations in this sector by the 5th U.S. Infantry division, known as the "Red Diamond" division commanded by Major-General Stafford LeRoy Irwin.

NB: The exact location where you stand now was back then on abandoned Farmhouse with a German field observation post of a firing battery of four 15 cm howitzers and several 10,5 cm guns of the 1352nd artillery regiment of the 352nd VGD, next to a battery of several 22cm "Nebelwerfer" (rocker projectors) around "Kippenhof". This observation post - today's Officers' Club of Diekirch army barracks -, was manned day and night by artillery observers to scan the "Sauer" valley and its south banks and ridge.

After initial tactical successes and territorial gains during the December 16-22, 1944 time frame on the southern shoulder of the German "Ardennes offensive" ("the Bulge"), the German units - in this sector - primarily the 352nd "Volksgrenadier Division" - were stopped in their advance and had to retreat to the northern banks on the Sauer river.

As Gen Patton's Third Army was gaining momentum in its drive north to -rescue Bastogne part of his efforts focused on the southern shoulder to contain the enemy in this sector. To deny any further German attempt to cross the "Sauer" river, Gen. Patton, after his entire Third Army had completed the move from the "Soar" region on the French-German border by December 22, 1944, shifted its own 5th U.S. Infantry "Red Diamond division" from the Echternach - Haller line to the "Ingeldorf-Diekirch-Bettendorf sector, lying in with the 4th U.S. Infantry "Yvy Leaves" division to form a consistent line of defense on the south banks of the "Sauer". By late December 1944, the front had stabilized, as the temperatures had dropped to -16 degrees Celsius daytime and often to -24 at nighttime. Only after Bastogne had been completely liberated and secured, did the Third U. S. army efforts concentrate on the "Sauer" river valley as part of its XXth Corps' task to "liquidate the "Southern Shoulder of the Bulge". As a result, the 5th U.S. Infantry division - considered a river crossing expert unit - was tasked with crossing the "Sauer," and to recapture the towns, including Diekirch and Bettendorf in the valley, retake the northern high grounds and cut the enemy off from reaching the Our river and thus the "Westwall" on the German side.

Early in the morning of 18 January, 1945, the 10th Infantry regiment's 2nd and 3rd battalions jumped off, the 3rd being able to cross by means of plywood assault boats and floating infantry bridges without being detected by the Germans. Not having been detected it was able to proceed directly to high ground northwest of Bettendorf, and started patrolling to contact the 4th Division "Ivy Leaves" to its right.

The 2nd battalion crossed below Diekirch against mounting resistance, but cleared the strip of "Rue Clairefontaine" and moved on to occupy high ground. The 1st battnlion crossed at mid-morning, moving to relieve a company of the 2nd battalion at Gilsdorf continuing mopping-up operations. During the same time under sporadic German artillery-mortar; and rocket projector fire, the 2nd infantry regiment's own 2nd battalion crossed the river close by Diekirch offer two attempts to erect on assault bridge had been unsuccessful. Finally, a third attempt, in collaboration with the engineers of "B" company, 7th Engineer battalion was successful — the 2nd battalion crossed over and immediately marched on the northwestern heights beyond Diekirch. At this time, the 1st battalion was able to push forward in northerly direction, capture Erpeldange and surround parts of the "Goldknapp" hill before moving continuing its advance in direction of "Friedhaff" despite knee-deep snow. Meanwhile, the 2nd battalion, after clearing out the high-ground from Ingeldorf to the plateau, swung to the back of Diekirch and left the liberation of the town to the units of the 3rd battalion, commanded by Lt. Col Robert Connor, who gave the order to capture Diekirch after the 2nd Infantry regiment had the Diekirch-Ingeldorf bridgehead securely in hand. Supported in this sector, by the 105 mm howitzers of the 50th Field Artillery battalion, "I" and "K" companies were detailed to this task. "K" company met strong resistance in the "cemetery and station" areas of Diekirch and German artillery kept pounding the sector. Until later in the afternoon, the tanks had not managed to get across the "Sauer," yet, and "L" company, which had been guarding the crossing points, was brought in for support. German minefields in the area also slowed down the overall 2nd Infantry regiment's advance, as the 10th Infantry regiment seemed to make better progress on the right flank.

By nightfall of January 18, 1945, the overall 5th Division's bridgehead was about 1,5 KM deep with a 6.5 KM front. Each regiment had crossed all its battalions, along with the 737th Tank battalion and tank destroyers from the 803rd Tank Destroyer battalion. The enemy had been caught by surprise, especially, the German 915th regiment in the Bettendorf sector had been overrun, whole platoons being taken prisoner that claimed they never had a chance to fire a shot. Finally, enemy artillery concentrations fell on the beachhead, but seemed to have a lack of ammunition and the locomotion for their guns, so important to hitting moving targets. Despite the enemy fire and the handicapping elements of snow and mud, engineers were able to throw across one treadway bridge, two class 40 bridges, two assault boat bridges and two foot bridges enabling some Sherman tanks and M- 10 tank destroyers to cross the icy waters of the "Sauer river".

One of the many floating bridges across the Sauer river

On the second day of the "crossing" - January 19, 1945 -, the beachhead in the 10th Infantry regiment's sector extended to some 5 KMs in depth - very near tho first objective. Bastendorf, including YOUR PRESENT STAND POINT on the "Herrenberg" farmhouse (German artillery observation post). The 11th Infantry regiment, brought in for reinforcement, continued its push while maintaining contact with the 4th Division on its right. The 2nd battalion took Bastendorf. On that same day, the 2nd regiment's 1st battalion got into vigorous exchange of fire at the "Friedbusch" on the "Ierpoldinger Keppchen", as an advance guard of the 2nd battalion had reported stiff enemy resistance around "Friedhaff". After the 3rd battalion had cleaned out Diekirch, it was first called back to Ingeldorf as a reserve unit and some of its subunits had to be detailed to Lt. Col. Blakefield's 1st battalion. Around 3:00 p.m. , the 2nd regiment's 1st and 2nd battalions set out towards "objective 12 - the -Kippenhof farm" in a coordinated attack. German resistance became so strong that no contact between the two units was possible.

January 20, 1945 the 1st battalion was the first to move in direction of "Kippenhof", where it ran into a local counterattack. In addition, numerous well dug-in German positions in the surrounding woods made progress without tank support almost impossible. German artillery fire called for numerous losses in the 1st battalion rows. The 2nd battalion, although still not cable to make contact, succeeded after hard individual close combat fighting in the bitter cold, to break the defensive belt around "Kippenhof" in the evening. The 3rd battalion immediately relieved several hard-hit companies and was given the task of clearing circumvented enemy positions out of the woods with support from the 737th tank battalion. In the 10th Infantry regiment's sector, progress was faster as its 1st and 2nd battalions steadily continued north "through swirling snow and cold" in the general direction of Tandel, Brandenburg, Putscheid and the Our River.

Better a prisoner of war than killed ...

On January 28, 1945, all assigned regimental objectives were achieved, and plans were formed by the division to establish a defensive line and outposts overlooking the Our river, as the 2nd Infantry regiment was ordered to relieve the exhausted elements of the 10th and 11th regiments. After a few days of much needed rest, the 5th Infantry Division's sector was gradually shifted at the beginning of February 1945 to take part in General Patton's Third army's strike across the "Sauer" river on an 8 KM front northwest of Echternach, thus marking the invasion of mainland Germany and the beginning of the "Rheinland campaign" on February 7, 1945.

A dramatic recreation of the "Sauer river crossing" in farm of a life-size diorama can be seen at the National Museum of Military History in Diekirch (www.nat-military-museum.lu)

"... How human beings could endure this continuous fighting at sub-zero temperatures is still beyond my comprehension." 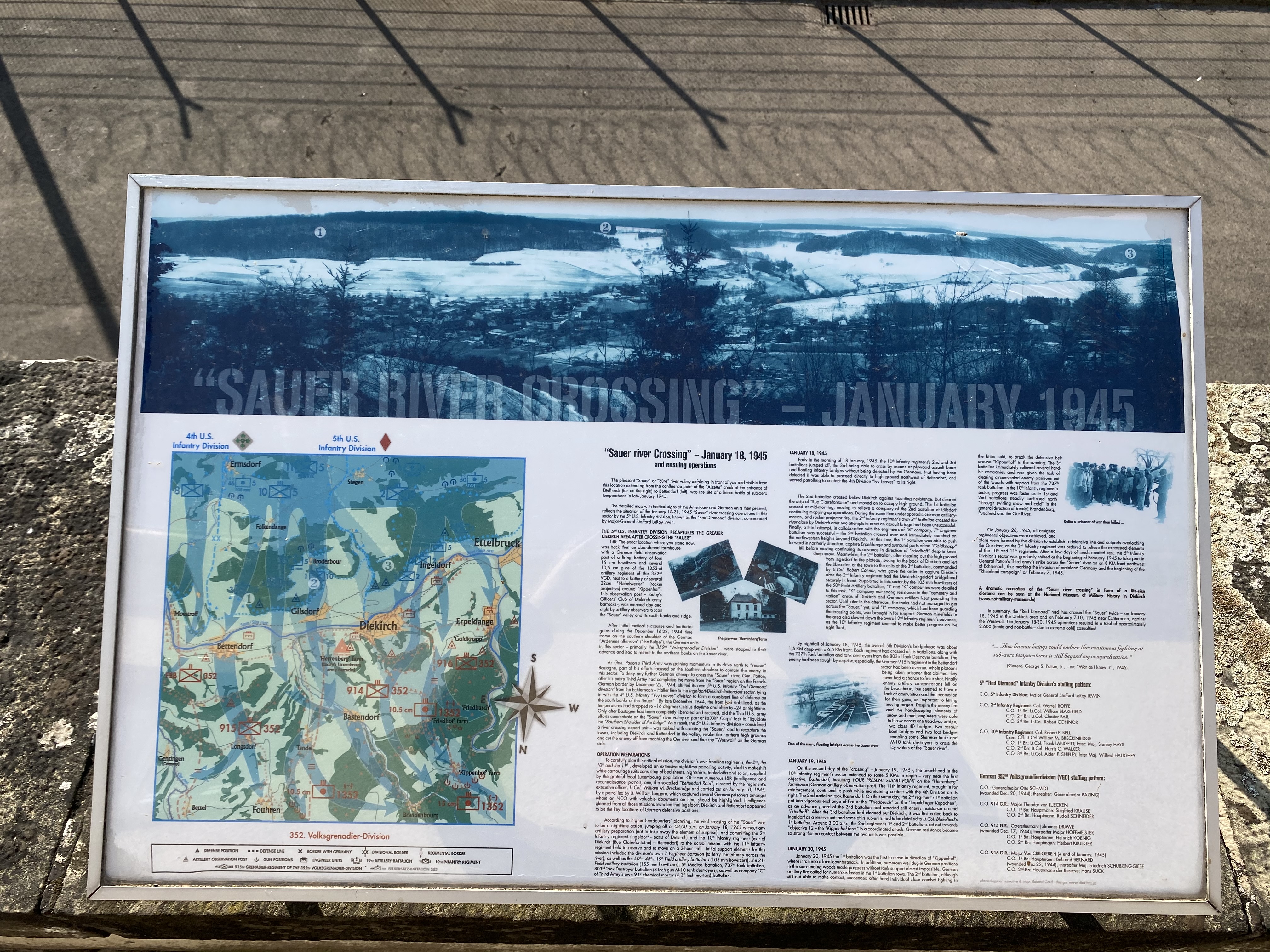