On a small hillock located just off the road up a set of steps surrounded by a fence, at the Buckner memorial site next to the Easley monument.

A flat concrete base with an inscribed piece of marble attached on top.

The memorial remembers Colonel Edwin T. May, Commander of the 383rd Infantry Regiment, 96th “Deadeye” Infantry Division. Col May had been leading his Regiment through several difficult actions on Okinawa since April.  He was awarded the Distinguished Service Cross for his actions on the Conical-Sugar Ridge in May 1945. He was killed near the location of this memorial on June 5, 1945; LTG Buckner and BG Easley were also killed near this sport later that same June.

The text on the memorial is in English and reads:

-Symbol of the 96th Infantry Division-

Killed on this spot 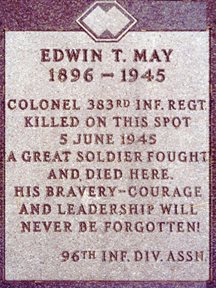 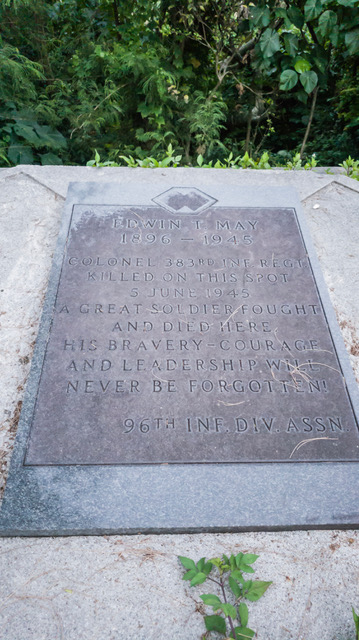