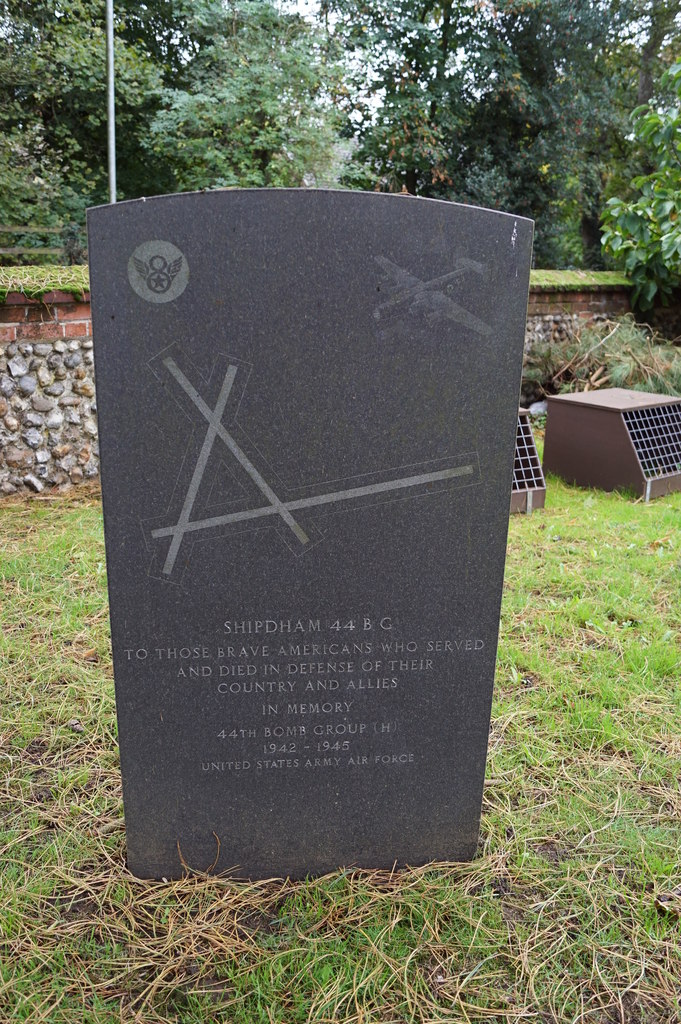 In the south-west yard of the church.
Monument

A black marble stone monument in the shape of a gravestone. Reliefs on the front include the US Army Air Forces insignia, a B-24 airplane, and RAF Shipdham illustration. Below them, the dedication message follows, inscribed in English text with white lettering. The monument honors the casualties of the 44th Bomb Group who were based in RAF Shipdham during World War II.

The 44th Bombardment Group was stationed at Shipdham in Norfolk, England, from October 1942 until June 1945. It was the first USAAF group equipped with the B-24 and in the United States it acted as a training unit for others scheduled to fly the Liberator. The group was under strength until March 1943, as one of its squadrons was detached in the United States. It had the highest missing in action losses (153 aircraft) of the Eighth Air Force B-24 groups and claimed more enemy fighters (330) than any of them.

The 44th received its first Distinguished Unit Citation for the raid on the naval base and shipbuilding centre at Kiel, Germany, on 14 May 1943.

The group then moved temporarily to North Africa that summer. The attack on the oil refineries at Ploesti, Romania, on 1 August 1943 was among its missions.

The 44th returned to Shipdham for nearly four weeks and then returned to North Africa again for 15 days. This was the last detachment however and the group rejoined the growing bomber offensive from England.

Its total of 343 missions included 18 from North Africa and the 44th operated from England longer than any other B-24 group.

TO THOSE BRAVE AMERICANS WHO SERVED

AND DIED IN DEFENSE OF THEIR