<< Back to Heigham Street, Norwich 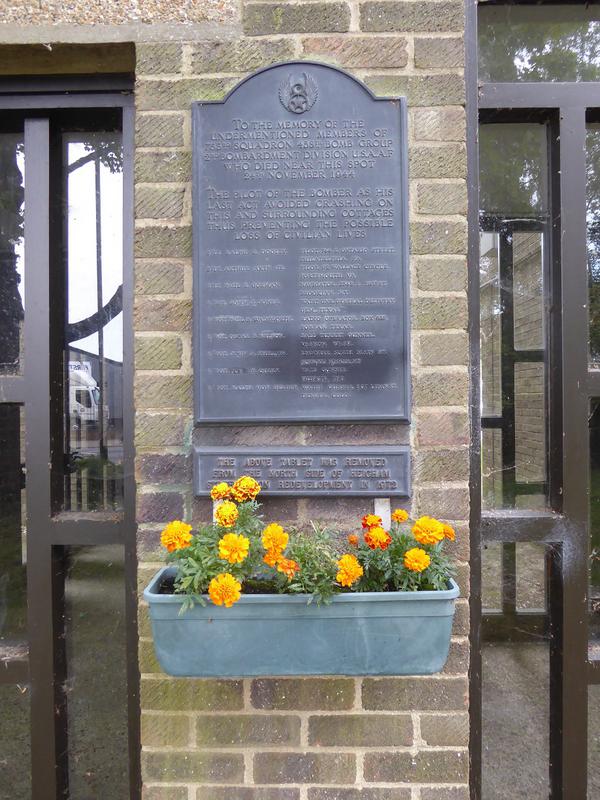 Affixed on the left wall beside the entrance door.

A grey rectangular plaque with curved upper edge, inscribed in English in relief lettering. On the top-center of the plaque is the relief of the 8th Air Force insignia. The plaque commemorates the fallen crew of the B-24 #42-95133 “Lady Jane”. Another plaque on the bottom tells the original placement of the plaque.

2Lt Ralph Dooley and crew were assigned to the group on a busy day.   Two of its combat crews (one on Detached Service to Scotland) were lost on operational missions, and one crew crashed during a training flight.  Dooley had arrived just in time to partake in the Truckin' Missions during September, flying four of these gas hauls to Lille, France.  At the beginning of October the group went back on operational status.  Dooley and crew had a rather short career with the group, flying eight combat missions (not including two abortive attempts) in their 10 weeks with the group.   Unfortunately their tour ended abruptly, not in combat, but on a practice mission on a cold and foggy November day just before Thanksgiving.

2Lt Burton Wheeler and 2Lt John Kowalczuk were not on the practice mission that day.  They would later both complete their tours and be rotated back to the States.   Flying as co-pilot that day was Ralph Dooley's good friend, 2Lt Arthur C. Akin who had his own crew.  Akin and Dooley were both assigned with their crews on the same day.  He was filling in for Burton Wheeler who had just lost his brother, a pilot in the 94th Bomb Group flying B-17's out of Bury St. Edmonds.  John Kowalczuk was not along, as he had been removed from the crew to undergo training to be a lead bombardier.

The A/C hit the steeple of St. Philips Church on Hamm [sic] (actually Heigham) Road, damaging the right wing and right tail assembly and continued 1000 yards, apparently in normal flight at which time the right wing dropped and the ship crashed and burned.  Wreckage shows that landing gear was retracted.

TO THE MEMORY OF THE

WHO DIED NEAR THIS SPOT

THE PILOT OF THE BOMBER AS HIS

THIS AND SURROUNDING COTTAGES