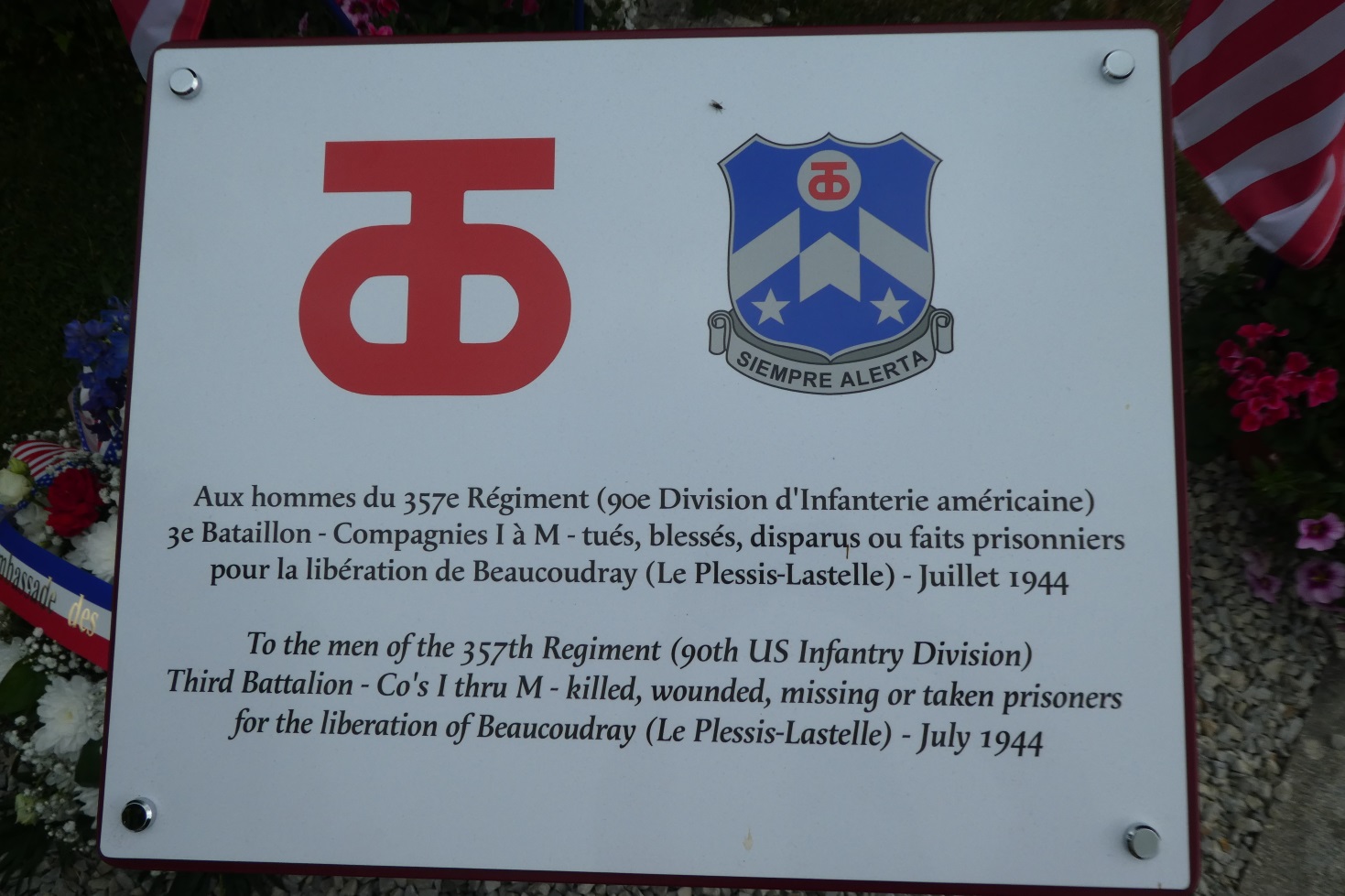 On a small garden outside the front yard of a house, on the east side of the town war memorial.

A white square plaque with a brown metal backboard and is supported by a brown metal pole. The plaque has the printed images of the 90th Infantry Division and the 357th Regiment’s insignias followed by the commemoration message that is inscribed in French and English. The plaque honors the men of the 357th IR who liberated the town in July 1944.

As of 3 July 1944, the VII American Corps commanded by General Collins launched an offensive aimed at piercing the front to the south of Cotentin after the liberation of Cherbourg. The Germans set up a solid defensive line called “Mahlmann Line” by the name of Generalleutnant Paul Mahlmann, commander of the 353. Infanterie-Division, who imagined it.

The US 90th Infantry Division is responsible for seizing Hill 122, known as Mont-Castre. At the same time, it must progress southwards along the departmental road 338 in the direction of the hamlet of Le Plessis-Lastelle. On the morning of July 5th, the 357th Infantry Regiment under the orders of Colonel George H. Barth deploys one of his battalions to assault the hamlets of Le Plessis-Lastelle and Beau Coudray. But the Germans of the 77. Infantry Division trigger multiple artillery shots that fix the American infantrymen. The highly compartmentalized bocage is favorable to defensive fighting and the Germans derive all the advantages, especially since the American units are unable to deploy properly.

The 357th Infantry Regiment (IR) re-assaulted, supported by Sherman tanks belonging to Squadron C of the 712nd Tank Battalion at the dawn of July 6th, and after a major artillery preparation. Shortly before dark, Colonel Barth moved forward with anti-tank guns and heavy weapons in front of the defensive device located to the south of the hamlet in the event of an opposing counter-attack. At 2345 hours, after an artillery preparation, the Germans launched the much-feared counter-offensive and succeeded in isolating the elements of the 357th IR positioned south of Plessis-Lastelle. Numerous fights took place throughout the night between the infantry of the two camps. The following day, July 7, an American company is launched to assault the isolated elements but it suffers very heavy losses, its unit commander being killed. The next morning, July 8, six soldiers joined the lines of the 357th IR and realized that all their comrades were made prisoners or killed. The Germans, reinforced by paratroopers from the Fallschirmjäger-Regiment 15 (Fallschirmjäger-Division), failed to continue their attack and the front line stabilized for 48 hours. On July 10, the 90th Infantry Division relaunched the progression, permanently freeing the hamlets and the front line moved south of Plessis-Lastelle.

Other source of information: https://www.dday-overlord.com

To the men of the 357th Regiment (9oth US Infantry Division)