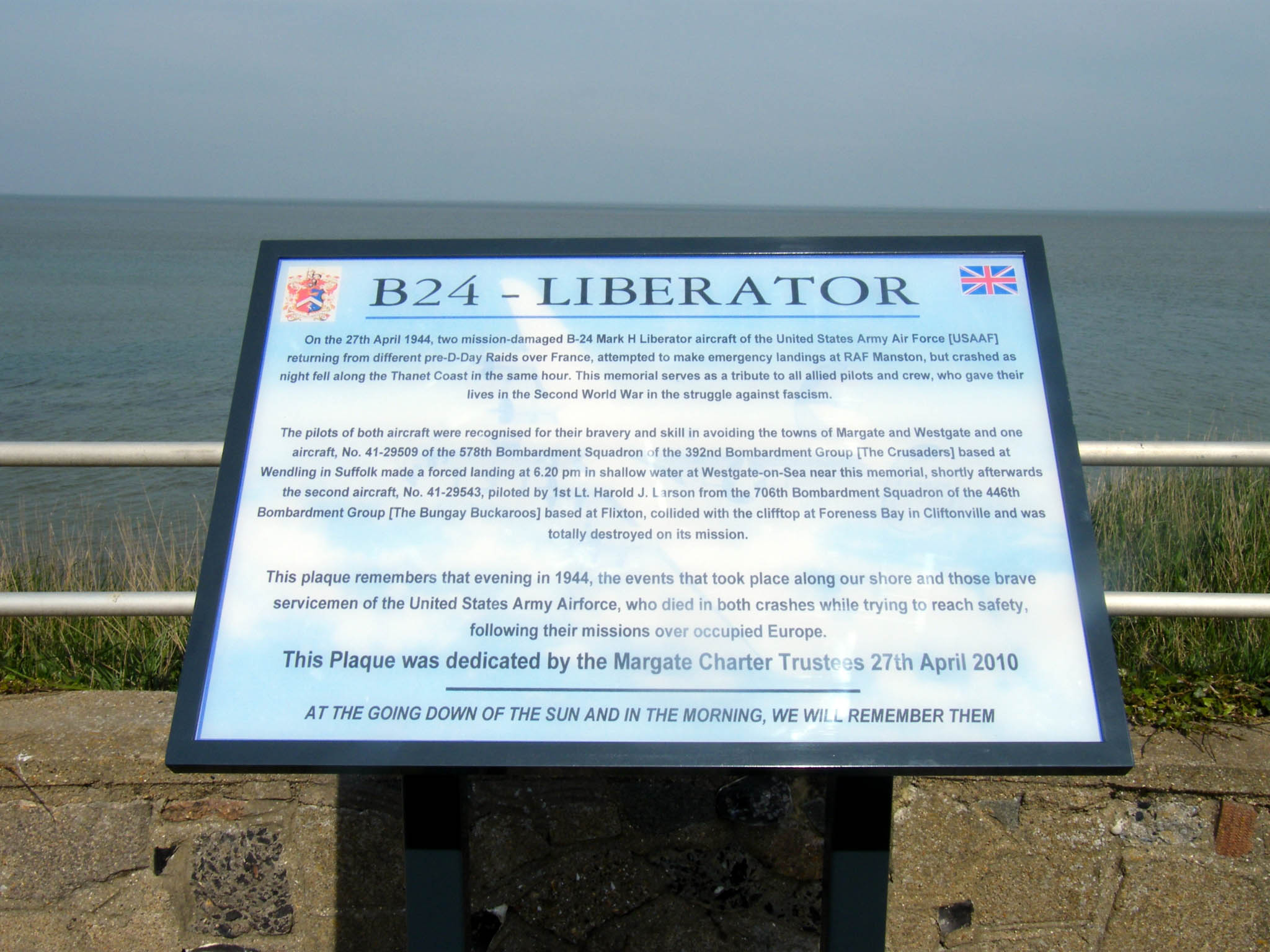 On the west side off of the road, placed beside a small paved area near the guardrails.

A rectangular plaque with a sky background, framed with metal that is supported by two metal bars. The panel is inscribed with English text in black lettering. On the top-left corner, the Margate Coat of Arms is printed while on the top-right is the Union Jack. The plaque remembers the occasion on 27th April 1944 when two B24 Liberator aircrafts of the USAAF crashed into the sea with the loss of lives.

The first aircraft, No. 41-29509 of the 578th Bombardment Squadron of the 392nd Bombardment Group (‘The Crusaders’) based at Wendling in Suffolk made a forced landing at 6:20 PM in shallow water at Westgate on Sea after being damaged by anti-aircraft fire over Dunkerque. Five of the crew were killed and four injured in the crash. One crew member, radio operator, T/Sgt Parke V. Kent, parachuted to safety and was captured and so became a POW.

Shortly after this incident at 9:07 pm, a second Liberator crashed at Foreness Point. This was from the 446th Bomb Group, 20th Combat Wing, 2nd Air Division, 8th U.S.A.A.F, stationed at Flixton in Norfolk. This had flown 9 missions. It crashed while returning from a mission to bomb marshaling yards at Blainville in Nazi-occupied France. 8 of 10 men aboard were killed with two having parachuted to safety just before the crash. They were picked up by the Margate lifeboat, Lord Southborough.

The memorial plaque was erected by the Margate Charter Trustees to coincide with a Service of Remembrance at the Westgate-on-Sea war memorial, on the morning of 27 April 2010, in the presence of Mark Jacob Weinheimer, Anne Keese, Joan Ries, and Dona Cox, children of the pilot of the aircraft and in the presence of one of his father’s rescuers as well as an Honour Guard from USAF Mildenhall and the United States military attaché Lt Col Jeff Price.

On the 27th April 1944, two mission-damaged B-24 Mark H Liberator aircraft of the United States Army Air Force (USAAF) returning from different pre-D-Day Raids over France, attempted to make emergency landings at RAF Manston, but crashed as night fell along the Thanet Coast in the same hour. This memorial serves as a tribute to all allied pilots and crew, who gave their lives in the Second World War in the struggle against fascism.

The pilots of both aircraft were recognised for their bravery and skill in avoiding the towns of Margate and Westgate and one aircraft, No. 41-29509 of the 578th Bombardment Squadron of the 392nd Bombardment Group [The Crusaders] based at Wendling in Suffolk made a forced landing at 6.20 pm in shallow water at Westgate-on-Sea near this memorial, shortly afterwards the second aircraft, No. 41-29543, piloted by 1st Lt. Harold J. Larson from the 706th Bombardment Squadron of the 449th Bombardment Group [The Bungay Buckaroos] based at Flixton, collided with the clifftop at Foreness Bay in Cliftonville and was totally destroyed on its mission.

This plaque remembers that evening in 1944, the events that took place along our shore and those brave servicemen of the United States Army Airforce, who died in both crashes while trying to reach safety following their missions over occupied Europe. 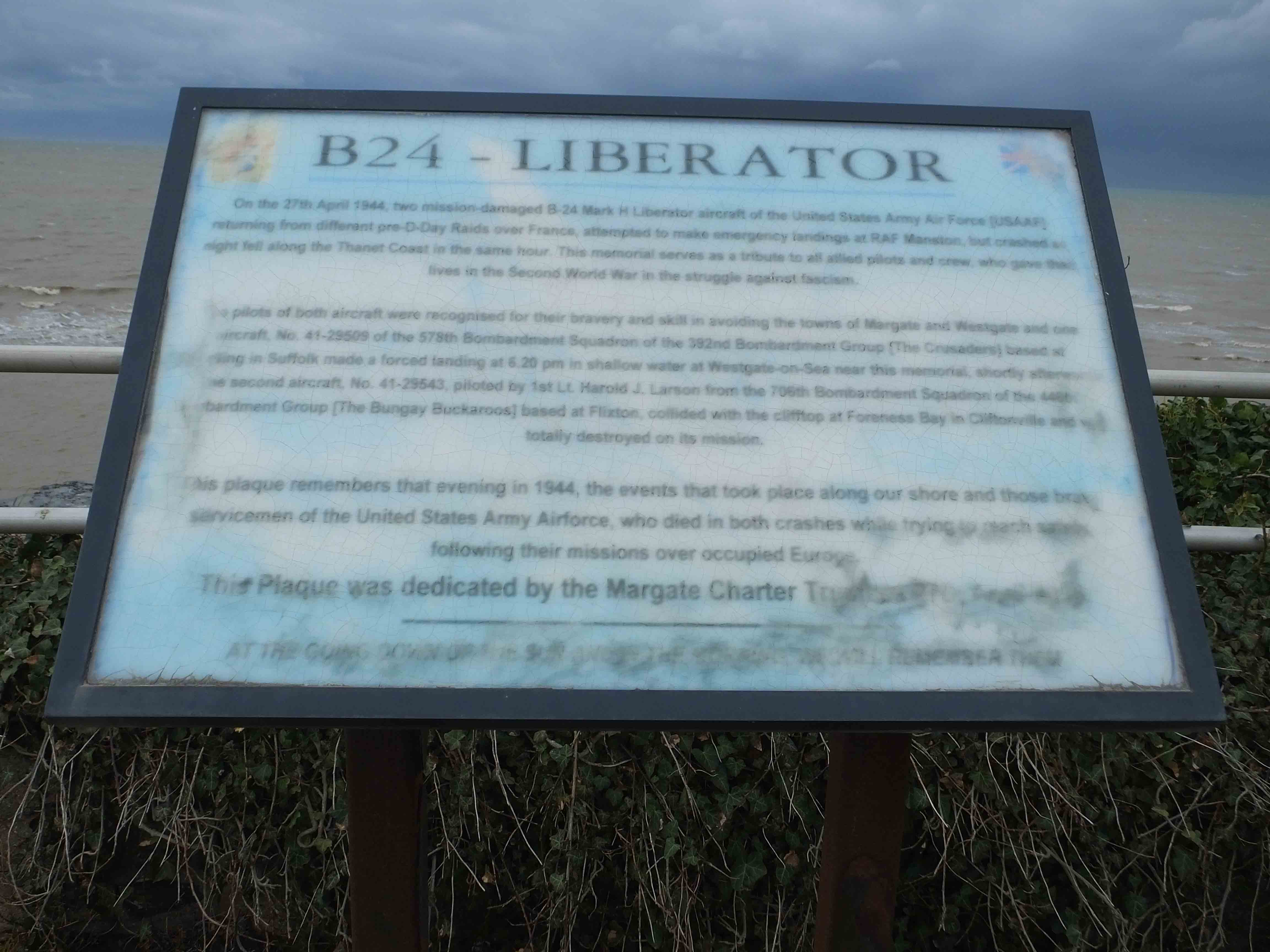