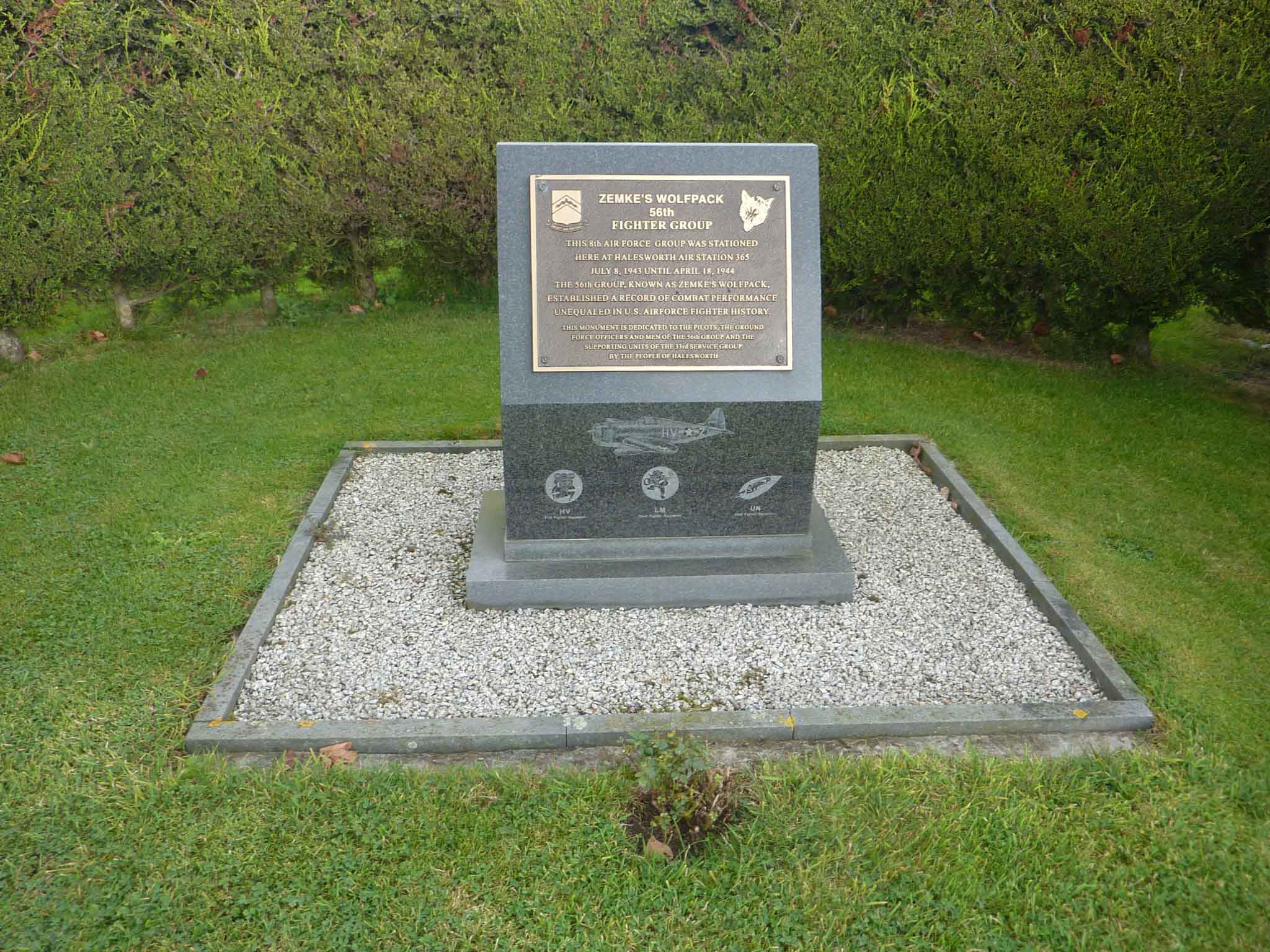 On the north side of the road, hedged in between two other hedged memorials.

A square metal plaque mounted on the upper angled face of the dark marble base. The plaque is inscribed in English in raised lettering. On the top left corner of the plaque is the insignia of the 56th Fighter Group while on the opposite is a wolf image. On the lower front face are printed silhouettes of a P-47 Thunderbolt, 61st and 62nd Fighter Squadron insignias, and the 63rd Fighter Squadron (Air Defense Command) emblem. The memorial commemorates all men of the 56th Fighter Group and 33rd Service Group who served at RAF Halesworth during World War II.

Halesworth was built in 1942–1943 and was intended for use as a bomber station, and was built as such with a 6,000 ft. main runway and two secondary runways of 4,200 ft length. There was an encircling perimeter track with 51 hardstands and two T-2 hangars. Nissen hut accommodations for about 3,000 personnel were also built south of the airfield.

The first unit to use Halesworth was the 56th Fighter Group which arrived from RAF Horsham St Faith on 9 July 1943. Its operational squadrons were:

Being only eight miles from the Suffolk coast, Halesworth was ideally located for escort fighter operations, where the range was an important factor. For this reason, the 56th Fighter Group was moved there. Flying Republic P-47 Thunderbolts, the group flew numerous missions over France, the Low Countries, and Germany to escort bombers attacking industrial establishments, V-weapon sites, submarine pens, and other targets on the Continent.

In addition, the 56th strafed and dive-bombed airfields, troops, and supply points; attacked the enemy communications; and flew counter-air patrols.

The 56th became one of the most outstanding fighter organizations in the Eighth Air Force, producing many of the top fighter aces including Francis Gabreski and Robert S. Johnson. The group was responsible for pioneering most of the successful fighter escort tactics with the Thunderbolt and had many successes while operating from Halesworth.

On 19 April 1944, the group had to vacate the airfield as it was needed for a new B-24 Liberator group and was transferred to RAF Boxted.

The 33rd Service Group was activated at Mitchell Field, New York on 15 January 1941 with the designation 33rd Air Base Group.  In April, three squadrons were formed: Headquarters and Headquarters Squadron, the 45th Materiel Squadron (which became the 45th Service Squadron), and the 34th Air Base Squadron.  Also in April, the group was relocated to Grenier Field, New Hampshire.  Shortly thereafter it was "placed under the jurisdiction the Air Service Command and redesignated the 33rd Service Group" in July 1942.  It would remain at Grenier Field until 26 December 1942, when it was ordered to Camp Kilmer, New Jersey in preparation for going overseas.

Between its activation and embarkation aboard a transport on 6 January 1943, the 33rd was reorganized on several occasions to conform to the developing structure of a USAAF service group.  Upon arrival in Gourock, Scotland the group traveled by rail to its new home at Station F-367 in Kingscliffe.  On 5 April 1943, the group was ordered to relocate to Station F-123 at Horsham St. Faith.   In July it would be moved again to Station F-365 in Halesworth before being relocated to its final home at Station F-150 in Boxted.

ESTABLISHED A RECORD OF COMBAT PERFORMANCE

THIS MONUMENT IS DEDICATED TO THE PILOTS, THE GROUND

FORCE OFFICERS AND MEN OF THE 56th GROUP AND THE

BY THE PEOPLE OF HALESWORTH 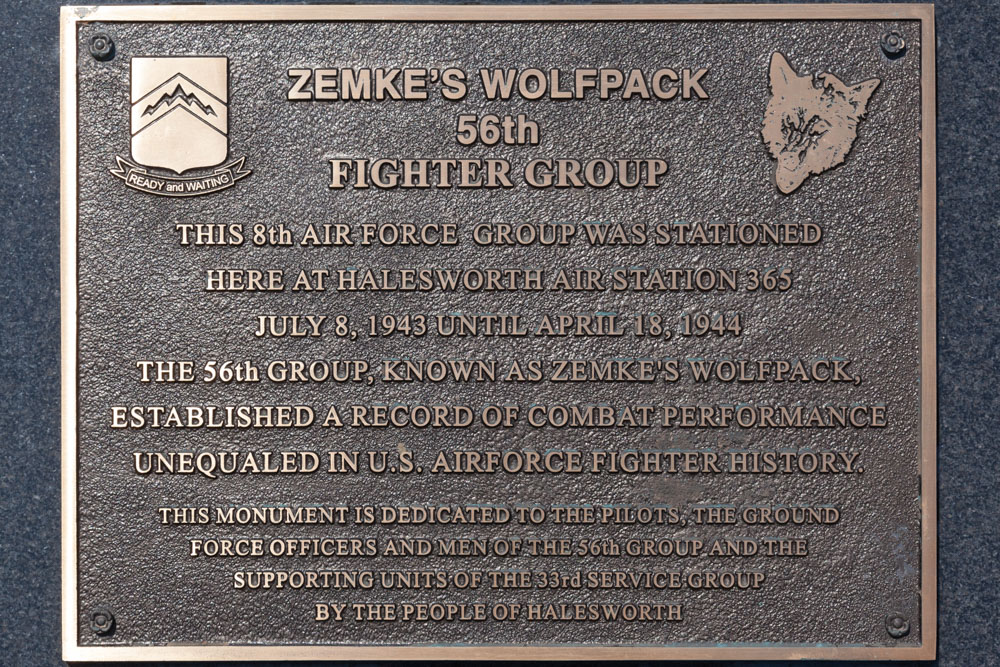 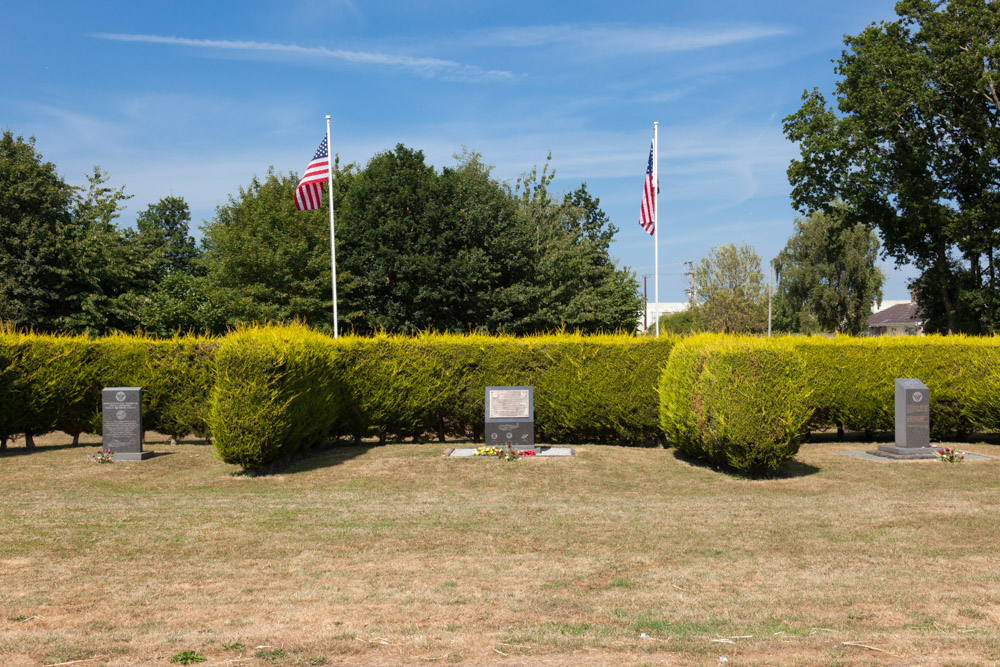