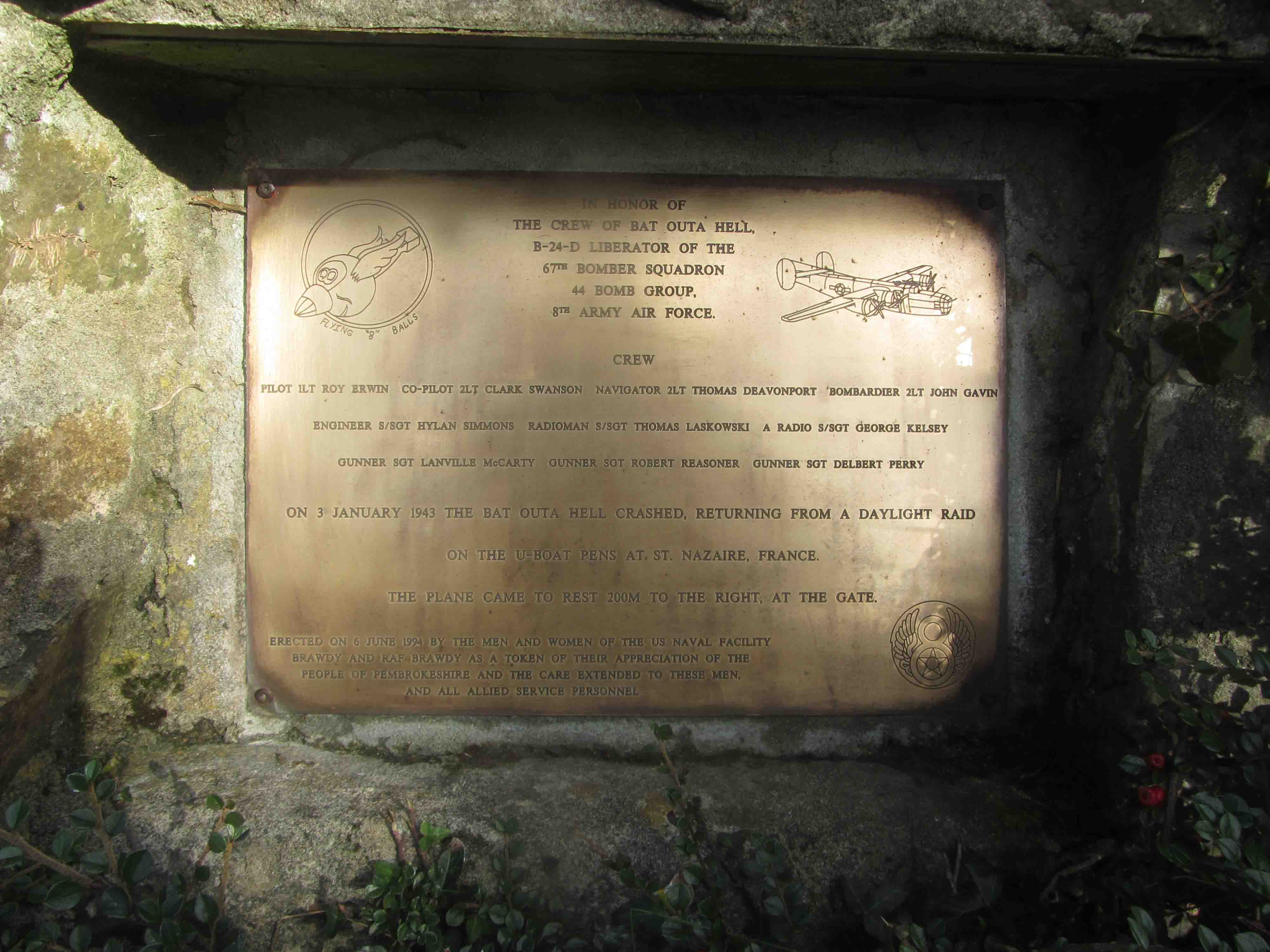 On the east side of the junction.

A rectangular metal plaque inset in the center of a low curved stone wall. The plaque contains an English inscription in incised lettering with 3 image depictions of the 44th Bomb Group insignia, a B-24 airplane, and the 8th Air Force insignia. The plaque honors and lists the names of the B-24 plane, named ‘Bat Outa Hell,’ which crash-landed at New House Farm on January 3, 1943. The memorial was erected on June 6, 1994.

On January 3, 1943, a flight of thirteen Consolidated Liberators from the 67th Bomber Squadron, 44th Bomber Group, Heavy, 8th USAAF were dispatched from Shipdham, Norfolk to join another flight of Boeing B-17 Flying Fortress bombers, in a daylight raid on the Nazi U-Boat pens at St. Nazaire. Eight of the Liberators reached the target before heading home, following the B-17’s. During the return flight, the B-17’s mistakenly headed for the Pembrokeshire coast. Unfortunately, each of the Liberators was running low on fuel, and the aircraft began looking for somewhere to land.

With the port fuel tanks empty, and both port engines stalled, Liberator 41-23806 attempted a forced landing near Dreenhill, just west of Haverfordwest, but a third engine failed, and the stricken aircraft crashed about 200 yards north of New House Farm. One of the crewmen was killed instantly, while the others, all injured, were taken to the War Memorial Hospital at Haverfordwest. Two of these men were returned to hospitals in the USA where they died within days.

THE CREW OF BAT OUTA HELL,

ON 3 JANUARY 1943 THE BAT UTA HELL CRASHED, RETURNING FROM A DAYLIGHT RAID

ON THE U-BOAT PENS AT ST. NAZAIRE, FRANCE.

THE PLANE CAME TO REST 200M TO THE RIGHT, AT THE GATE.

PEOPLE OF PEMBROKESHIRE AND THE CARE EXTENDED TO THESE MEN,

AND ALL ALLIED SERVICE PERSONNEL