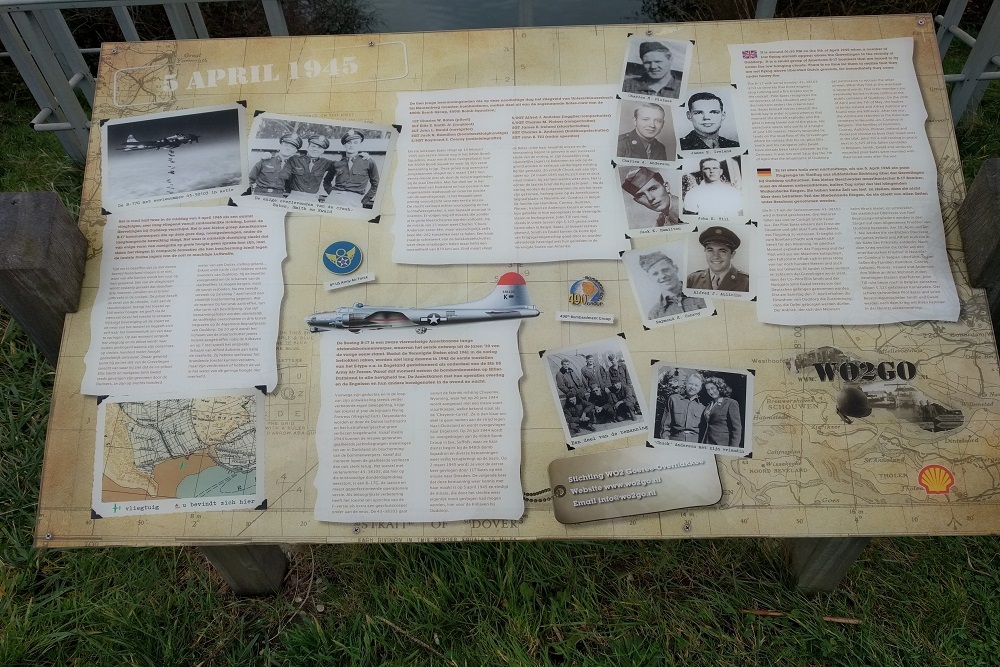 On the south side of the road, in front of the guardrail.

A rectangular metal panel angled vertically and is supported by two wooden beams, which contains the detailed story of the plane crash of the B-17G #43-38103. The information panel is printed in color and also features individual and group photos of the crew. The inscription is written in Dutch only and is printed inside the scrap paper images. This panel is dedicated to the crew of Pilot Bates of the 490th Bomb Group, 848th Bomb Squadron. They crashed on 5 April 1945 due to the German AA fire. Unfortunately, there was no survivor.

Source of information and photos: www.tracesofwar.com

(Note: The transcription on the far right of the info panel is not included as we currently have no close-up shot of it. If you have, please feel free to contact us for inclusion.)

It is around 01:30 PM on the 5th of April 1945 when a number of low flying aircraft appear above the Grevelingen in the vicinity of Ouddorp. It is a small group of American B-17 bombers that are forced to fly under the low hanging clouds. There is no time for them to realize that they are not flying above liberated Dutch grounds, for immediately they come under heavy fire.

The B-17 with serial number 43-38103 is hit so severely that three engines stop running and a fire breaks out in the cockpit. Pilot Bates recognizes the seriousness of the situation and over the intercom orders the crew to bail out. Bates himself moves towards the bomb bay in order to jump when at that moment the aircraft explodes and the pilot is being blown out of the plane. His parachute opens only partly at a height of just 100 meters. Heavily wounded he lands on the mud flats of the Grevelingen where he notices that his co-pilot Ellis Smith and his navigator John Ewald have already been taken prisoner by the Germans. It was not until Saturday the 7th of April that the inhabitants of Ouddorp get permission to recover the other airmen. What they find at the wreckage is beyond words. Five crew members are eventually buried in three coffins at the public cemetery of Ouddorp. On the 20th of April and the 7th of May, the bodies of James Ireland and Alfred Aulicino are found near the Kilhaven. After the war, the victims are reburied at the American cemetery in Neuville-en-Condroz in Belgium. The families of Hamilton, Conroy, Aulicino, Plotner, Ireland and Anderson choose to bury their loved ones in the USA. John Till is still resting in peace next to 5,325 of his fallen comrades in Belgium. Smith, Ewald and seriously wounded pilot Bates were reunited with their loved ones after the war.

The ten young crewmen who had to bomb the airfield of Unterschlauersbach near Nuremberg on this fateful day are part of the so-called Bates crew of the 490th Bomb Group, 850th Bomb Squadron;

First Lieutenant Bates flies his first mission on February 14, 1945, in the 849th Bomb Squadron, but is later transferred to the 850th Bomb Squadron where he gets his permanent crew. This group of inexperienced young men flew their first mission on March 2, 1945, targeting the industrial areas near the city of Dresden. With the target far in the hinterland of Germany and their position in the so-called lead squadron (front position of the attack group), it is certainly not a pleasant prospect for a first mission. However, the flight is going well and the anti-aircraft guns are not exactly accurate. Eleven more missions follow, which are completed unscathed. On the mission of March 21, Charles 'Chuck' Anderson manages to shoot down one, but probably even two Me-262 aircraft. A fine example of shooting from the ball turret gunner, because these fighter jets reach a top speed of 870 km/h. Flying at the end of March the Bates crew is on its twelfth mission and the crew begins to believe in a successful end to the war, there are hardly any enemy fighters left and serious progress is also being made on the ground towards Berlin. Chuck also writes to his father on March 24, 1945, that he should not worry too much, he will see him again soon. However, it is the last letter he will write... After the war, the young men who died are reburied in the American cemetery in Neuville-en-Condroz in Belgium. The family of Hamilton, Conroy, Aulicino, Plotner, Ireland, and Anderson choose to rebury their loved one in their hometown in the United States. John Till still rests in peace among his 5,325 fallen comrades in Belgium. Bates, though seriously wounded, Smith and Ewald survive the brief captivity of war and are eventually reunited with their loved ones in the United States of America.

The Boeing B-17 is a heavy four-engined American long-range bomber, the first design of which dates from the 1930s. After the United States became involved in the war at the end of 1941, not long afterwards in 1942 the first E-type aircraft were stationed in England as part of the 8th US Army Air Forces. From that moment on, the bombing raids on Hitler's Germany increased in intensity. The American cannon with their daytime operations and the English and their other allies in the evening and night.

Because of its formidable and continuously improved own armament in the course of its development, the aircraft quickly acquired the nickname Flying Fortress. Despite this, great losses are inflicted by the German air force and anti-aircraft guns. From mid-1944, the new generations of Allied fighters can fly far into Germany to protect the bombers. From that moment on, the Allied losses fell sharply. The aircraft, serial number 43-38103, which crashes here on that dreary Thursday afternoon, is a B-17G, the last and most perfected operational version. The most important improvement compared to the F version is a gun turret at the bottom of the nose. The 43-38103 goes

from the factory to Cheyenne, Wyoming, where it was modified on June 26, 1944 with a new type of tail turret known as the 'Cheyene turret'. She is then ready to take part in the fight against Nazi Germany and is flown to England. On July 26, 1944, she is transferred to the 490th Bomb Group in Eve, Suffolk, where she begins service with the 848th Bomb Squadron and returns several crews safely to base. On 2 March 1945 she was flown for the first time by 1 LT Bates on a mission to Dresden. The next time this crew gets acquainted with her again is on April 5, 1945 and the mission, which should never have been flown due to the bad weather, ends here in front of the Kilhaven near Ouddorp. 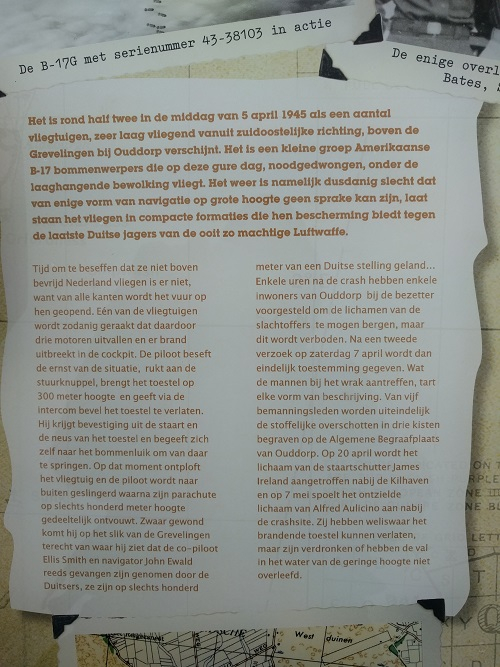 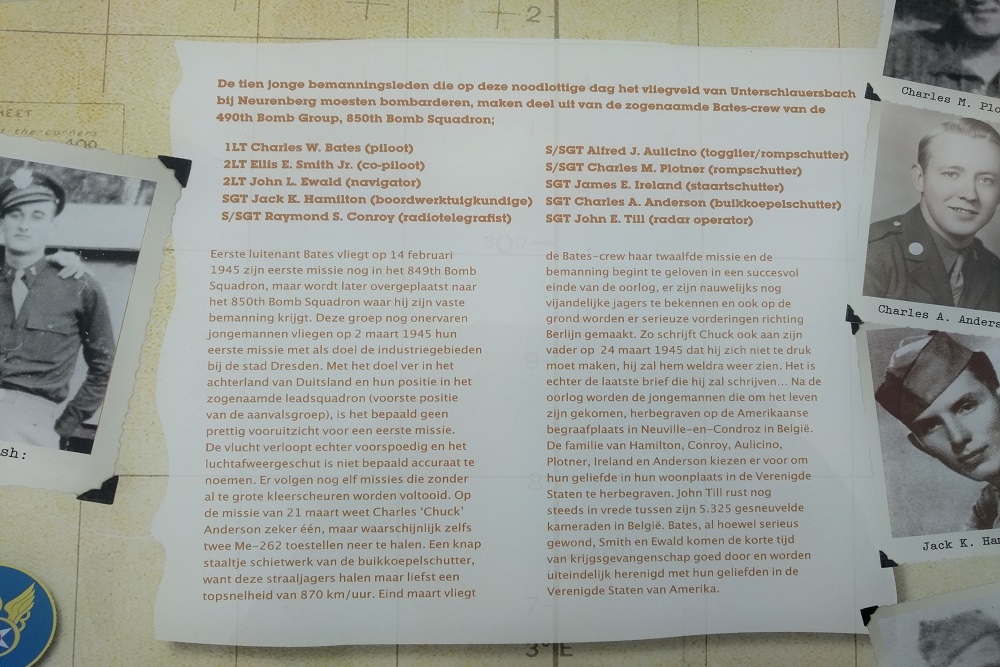 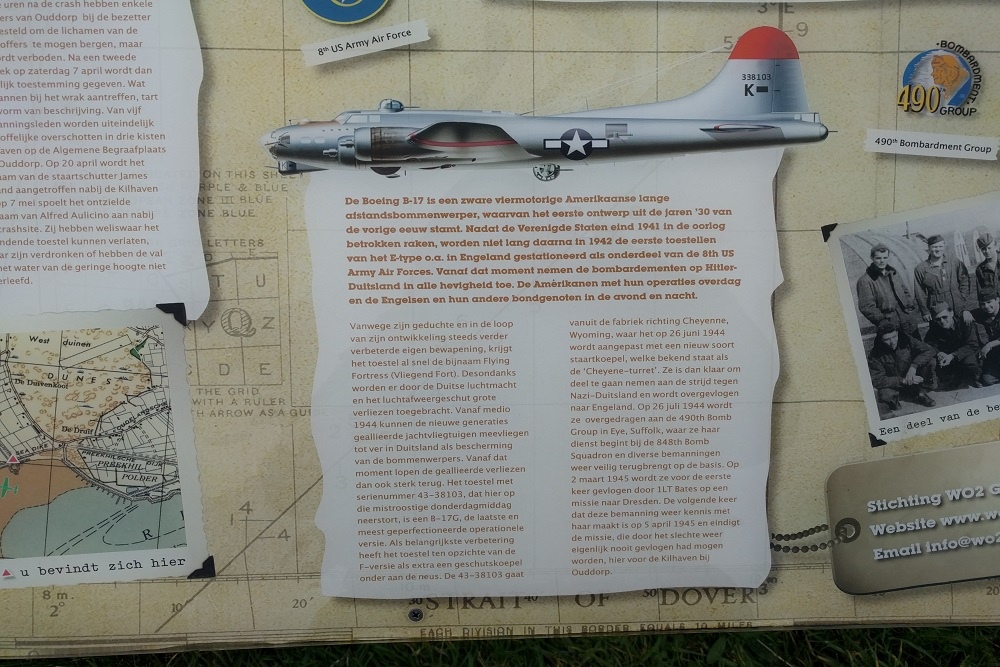 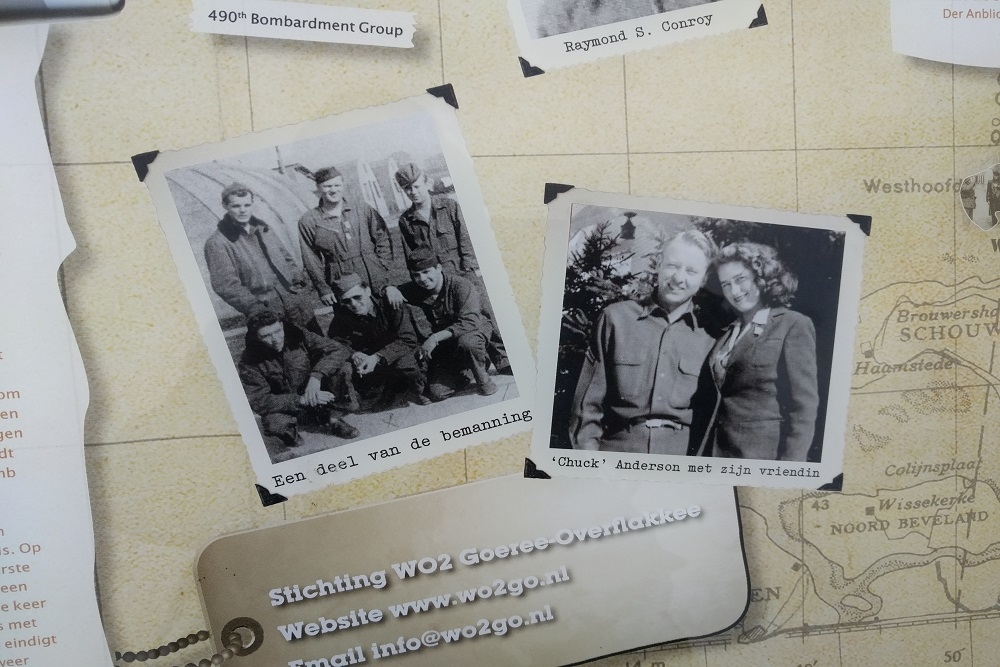