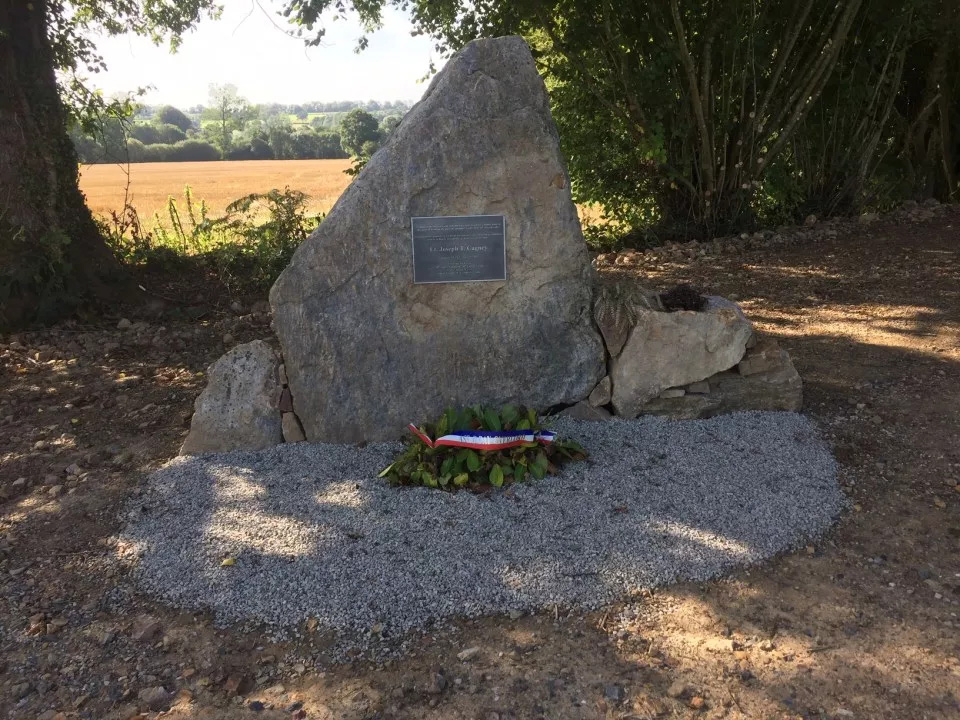 On the south side of the road.

A stone monument which shape is inspired by an airplane wing bearing a rectangular bronze plaque in memory of Joseph T. Cagney. The inscription is written in English and French in raised lettering. A ceremony, organized by the association D-Day Overlord and the municipality of Cerisy-la-Salle, was held in the afternoon of July 29, 2019, in the presence of his family.

On July 29, 1944, the Americans of the Combat Group “A” of the 3rd Armored Division reached the village of Cerisy-la-Salle, abandoned the day before by the defenders, in favor of the night. In the air, they were supported by squadrons taking off from different aerodromes. 2Lt Cagney was one of these. In the late morning of July 29, 2Lt Cagney took off from Carentan’s Advanced Aerodrome (ALG A-10) aboard his P-47 Thunderbolt, named “Gallopin Gertie”. With three of his brothers in arms, they supported the air fighters in the area of Saint-Denis-le-Gast before turning back to their starting point to refuel. Along the way, they were caught under the fire of a German anti-aircraft battery.

Hit on the spot or believing until the end his chance to master a makeshift landing, he crashed in the town of Cerisy-la-Salle, near the locality Le Coton.

A young promising artist who exchanged his paint brush for a fighter plane in the name of freedom. He gave the ultimate sacrifice here in Cerisy-la-Salle.