<< Back to Aircraft Hill 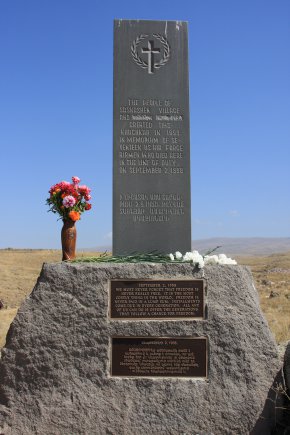 On a rocky hill outside of Sasnashen, Armenia. Marker Erected in 1993, the memorial is a gray stone pillar with Armenian and English text.  Commemorates the crash of a USAF C-130 flying from Germany on September 2, 1958.  17 airmen were killed when their unarmed plane strayed into restricted airspace and was shot down by four Soviet MIG-17 fighters.  The SIGINT C-130, based at Rhein-Main Air Base Germany, departed Incirlik on a reconnaissance mission along the Turkish-Armenian border. It was to fly from Adana to Trabzon, turn right and fly to Van. From Van, the pilot was to reverse course and orbit between Van and Trabzon. This course would parallel the Soviet frontier, but the aircraft was not to approach the border closer than 100 miles.The aircraft's crew reported passing over Trabzon at an altitude of 25,500 feet. What happened next is unclear. The C-130 crew may have become disoriented by Soviet navigational beacons which were on frequencies similar to those at Trabzon and Van--one signal in Georgia was stronger than that in Trabzon. The airplane strayed off course and entered Soviet airspace over Armenia. Soviet Air Force MiG-17 fighter planes intercepted the Hercules. The Hercules was shot down 34 miles northwest of Yerevan.

English text: "We must never forget that freedom is never really free. It is the most costly thing in the world. Freedom is never paid in a lump sum. Installments come due in every generation. All any of us can do is offer the generations that follow a chance for freedom."