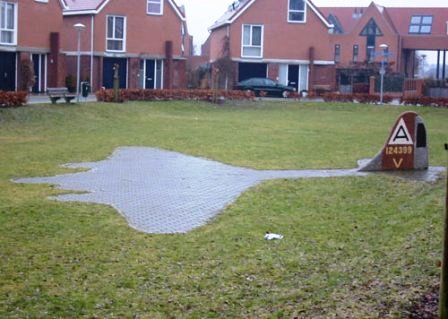 In the center of the subdivision's park, McCammonplein. Monument In the park of this subdivision is a brick-laid patio in the shape of an airplane with a protruding vertical stabilizer with a metal plaque.  The memorial honors the crew of the B-17 "MAN-O-War" that crashed near Opijnen on July 30, 1943.  The memorial was donated by Mr. and Mrs. Keene McCammon, Mr. and Mrs. John Bruce, the American Women's Club of Amsterdam, and The Municipality of Neerijnen.  The streets and footpaths surrounding the subdivision are named for the crew members.

Lt. Keene C. McCammon led the crew with the 91st Bomb Group (H), flying the B17 41-24399 'MAN-O-WAR' out of Bassingbourn. On July 30, 1943 Lt. McCammon’s crew participated in a bombing mission to Kassel. In this ‘maximum effort’ mission, 186 bombers bombed the Messerschmidt plants near this city in central Germany. It was the crews first mission. The outbound leg, to the target, proved uneventful. The formation did not meet with the Luftwaffe. The weather was excellent, and the target was found without difficulty. It was subsequently bombed with good results. On the way back to Bassingbourn, their luck turned. They were intercepted and attacked by FW190 fighters of JG26. A fierce fight ensued during which the ‘MAN-O-WAR’ and a second B17 (‘Yankee Dandy’, commanded by 1Lt. Robert M. Miles) were forced to leave the relatively protective realm of the bomber formation. The ‘Man-O-War’ was last seen leaving the formation, burning from under the wings with both inboard (no. 2 & 3) engines out and going into a dive. The German fighters pressed home their attacks on the ‘straggler’. After fierce fighting from both sides, Lt. Johannes Neumann, a leading fighter pilot with JG26, finally claimed the ‘MAN-O-WAR’ 5 kilometers south of Est, close to Opijnen.

died here during the

They rest in the cemetery 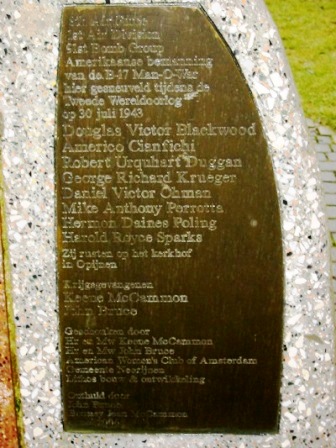 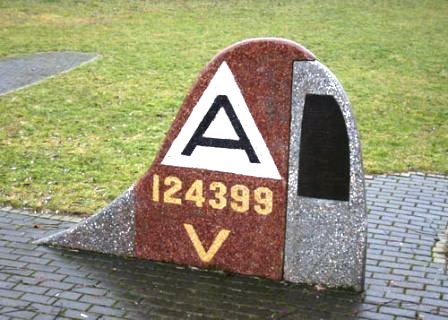