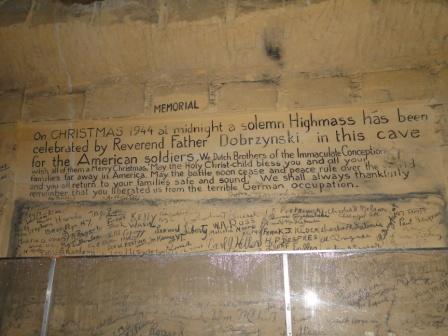 In the main hall of the caves. Marker The site of the Christmas eve midnight mass in 1944.  The mass was said by Reverent Father Dobrzynski (a Chaplain from New York) for the American GI's quartered in Maastrich and around the caves.  Over 250 soldiers carved their names into the wall as a remembrance of the occasion.  The mass is reenacted every Christmas eve inside of the cave.

On Christmas 1944 at midnight a solemn high Mass has been celebrated by Reverend Father Dobrzynski in this cave for the American soldiers.  We dutch brothers of the Immaculate Conception wish all of them a Merry Christmas.  May the holy Christ Child bless you and all your families far away in America.  May the battle soon cease and peace rule over the world and you all return to your families safe and sound.  We shall always thankfully remember that you liberated us from the terrible German occupation. 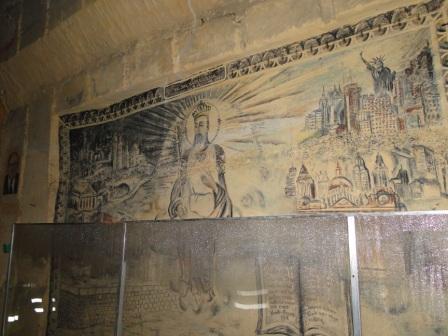