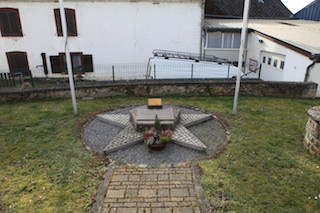 Follow the stone path stemming directly from Um Knupp to the elevated star between two flagpoles.  Monument Metal plate contains a letter written (in English) by Private Alfred S. Etcheverry to his wife. Directly underneath the letter is a remembrance plaque to Etcheverry, dedicated with sympathies to all the American orphans of W.W. II.

December 14th, 1944
My Beloved Wife,
In a few days, or possibly even a few hours, I shall be going into action.
It is never far from my thoughts,  that I may not see you again - you and our blessed babies. And since it is not given to us to know at what obscure spot on the map or what otherwise meaningless moment, my time will come, I have thought it best to write - to write now while I am still sound and well - some few things about myself, about us and about our children.
If I should die, it will be now one's responsibility but my own, that is was so willed. This is my way, my army - one in which, in a peculiar sense, I elected to serve. So easy it would have been to have requested limited service, even to have evaded the draft altogether. But I could never have brought myself to such a course last winter - so many lifetimes ago. And I could not bring myself to it today. For I would be severely judged and by mankind condemned if having seen the inevitability of this struggel, having urged that other men give their lives in the resolution of it, I were content with a lesser sacrifice.
However confused is our picture of the world today, however blurred the lines of the conflict, yet I am certain that I fight on the side of men of good will eveywhere in the world. No, more than that. For men of ill will were not born so, and may be, by time, and by God's good grace, be redeemed. It is for men everywhere - whoever they are, wherever they may be, that I am fighting...
From the war letters of Alfred S. Etcheverry
80th Infantry division, U.S. Army
U.S. VETERANS FRIENDS LUXEMBOURG REMEMBER
PRIVATE ALFRED ETCHEVERRY
1912 - 1945
KILLED IN ACTION AT GOESDORF, JANUARY 13TH, 1945
BURIED AT THE AMERICAN MILITARY CEMETERY, HAMM
PVT ETCHEVERRY WAS MARRIED AND FATHER OF TWO CHILDREN
DEDICATED IN HEARTFELT SYMPATHY
TO ALL THE ORPHANS OF W.W. II AMERICAN SOLDIERS
JEAN THILGES 1926 - 1945
ËMKOMM DUURCH GRANATSPLITTER, DEN 13. JANUAR 1945
IWWERT DEM GESPRËICH MAM PVT ALFRED ETCHEVERRY
22. 06. 1997 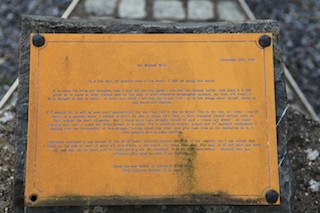 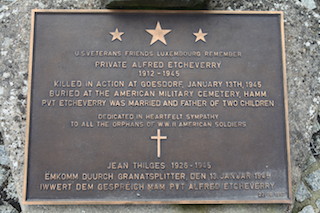