Immediately west of the solar paneled farm complex on Rue Am Aastert. Roughly 120 m Northwest of intersection between Rue Am Aastert and C331.  Monument Large slate stele with a bronze emblem of Athena above a bronze plaque with text in English. SGT Day G. Turner is honored for his commanding of a 9-man squad on January 8, 1945. His mission was to hold a critical flank position. However, the Germans overwhelmed the American squad with numbers, artillery, mortar, and rocket fire. Sgt. Turner withdrew his squad into the Aasert farm house (still standing today) with intent on defending it to the death. The enemy continued attacking, but was repulsed with heavy loses. Eventually, the Germans gained entrance with direct tank fire. Sgt. Turner refused to surrender, even with 5 men wounded and one killed. He boldly flung a can of flaming oil at the first wave of attackers, and the remaining Americans fought in the farm house, hand to hand combat. Sgt. Turner hurled countless hand grenades and bayoneted two Germans who rushed the doorway he was defending. He even used the enemy's weapons when his own ammunition ran out. The fight lasted four hours, and finally, when only three of the defending squad where left unwounded the enemy surrendered. The stand resulted in 25 enemy prisoners taken, 11 enemy prisoners killed, and many wounded Germans. For his heroic actions Sgt. Turner was awarded the Congressional Medal of Honor posthumously after being killed in action on Febuary 8, 1945. 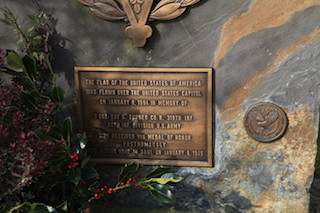 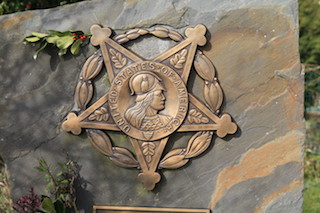 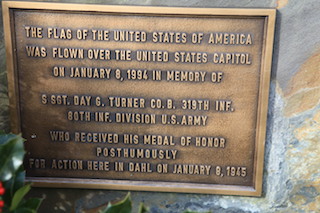 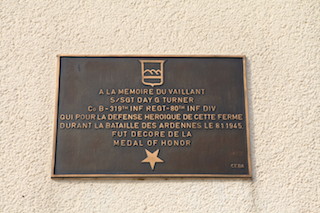