<< Back to Eschweiler - George O. Mergenthaler 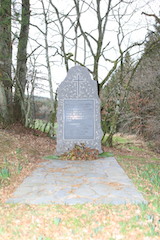 http://www.ryeww2.org/mergenthaler-george-o-3825-prd1.htm
"George was a member of a Mechanized Reconnaissance Unit of the 28th Infantry Division. On December 18, 1944 his unit was ambushed by the enemy in Luxemburg. George was in the middle of the convoy in a jeep. He jumped to the rear seat of the vehicle and took control of the 50 caliber machine-gun and urged his fellow soldiers to run to a ditch. His machine gun jammed twice; the second jamming afforded a wounded German soldier to crawl behind George and kill him at close range with a short burst from his submachine gun. George Mergenthaler died near the town he came to adopt, Eschweiler, Luxembourg." 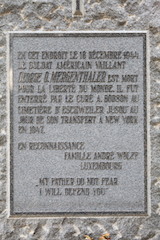