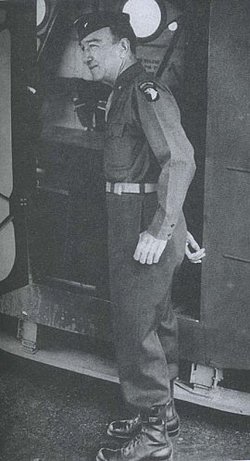 Donald Forrester Pratt was born on July 12, 1892 in Brookfield, Linn County, Missouri. He was the son of Arthur Lee Pratt and Mary Lee Davis Pratt. He was the Assistant Division Commander of the 101st Airborne Division during Operation Overlord, the invasion of Normandy, France, during World War II. He was killed in the first couple of hours of the invasion, and his death was recreated in the 1998 movie "Saving Private Ryan" with the death of a fictious Brigadier General Amend. He was the highest ranking Allied officer killed during Operation Overlord.

From 1932 to 1936, Pratt served as the Adjutant of the 15th Infantry Regiment in Tientsin, China, then served as an instructor at the Infantry School at Fort Benning, Georgia for the next four years. In early 1941, he became Chief of Staff of the 43rd Infantry Division. Realizing that airborne would be of importance in the war, in mid-1942, he became the Deputy Commander of the newly created 101st Airborne Division, completing airborne training at Fort Benning, Georgia. The division was sent to Britain for the pending invasion of Normandy, in February 1944, Major General William Lee, the 101st Airborne Division's Commander, suffered a heart attack. Pratt was next in line for the command, but General Eisenhower selected BG Maxwell Taylor, the 82nd Airborne Division's Chief of Artillery, for the command instead.

Pratt was selected to land in Normandy in an AG-4A glider, with his jeep and three other men: Lt Col Michael "Mike" C. Murphy (pilot, and considered one of the most skilled glider pilots in the world), 2nd LT John M. Butler (co-pilot), and 1st LT John L. May (the general's aide de camp). Taking off from Crookham Commons RAF Base, England, fifty-two C-47 towplanes and gliders left the base for the 2 ˝ hour trip. Coming down at Landing Zone (LZ) Easy about 4:00 am, near the town of Hiesville, France and ten miles inland from Utah Beach, the overloaded and off-balance glider skidded over 700 feet down the clearing into a tree lined hedgerow, killing 2nd Lt Butler and BG Pratt, and severely injuring Lt Col Murphy (he suffered two broken legs and a severely damaged left knee). Only 1st Lt May survived without injury. Accounts of Pratt's death differ, with some accounts claiming he was crushed when the overloaded jeep broke loose from its restraints and slammed forward. Another account claimed that the violence of smashing into the trees snapped his neck. Pratt was initially buried in a French pasture, then reburied in the Normandy American Cemetery. In July 1948, his body was exhumed and reburied in Arlington National Cemetery where it remains today. His wife, Martha M. Pratt (January 11, 1895 – March 29, 1968) is buried beside him. (Bio by Kit and Morgan Benson)