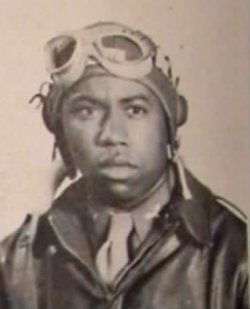 Walter Peyton Manning was born in Baltimore, Maryland on May 3, 1920 and grew up in Philadelphia, PA . Manning was a Tuskegee Airman and served in Italy in WW2. On April 1, 1945 (Easter Sunday), 2LT Walter P. Manning, a Tuskegee Airmen, flying a P-51B (42-106943) “Unaka” of the 301st Fighter Squadron, 332nd Fighter Group, “The Red Tails” was escorting B-24 Liberator bombers to a marshalling yard at St. Polten in Austria with 8 other P-51 Aircraft in his flight. After the bombing raid, returning to Ramitelli Air Field in Italy, the squadron encountered heavy flak at Linz and was attacked enemy planes. Seven “Red Tail” pilots shot down 12 planes including an FW-190 shot down by Manning. Unfortunately, Manning's P-51 was hit by enemy fire and went down about 15 miles south of Wels in northern Austria. Flight Officer William P Armstrong, ASN: T-66139, flying a P-51 B (42-103971) “Little Lil” was also shot down in this same action, KIA crashing with his plane. Ref: Missing Aircraft Reports {MACR}: 13376 & 13377) More about Walter Manning from the Chicago Chapter of the Tuskegee Airmen Facebook page: Philadelphia native, Walter P Manning enlisted into the Army Air Forces' Aviation Cadet Program on 15 March 1943. Manning gained initial attention for his dedication to his dream of becoming a military aviator. He had failed his initial physical exam because of a hammer toe and could have avoided military service. Instead, he used savings from his defense-plant salary to pay for the necessary surgery, so that he could be accepted into the program. After graduating from pilot training he was Commissioned as a 2nd Lieutenant, (officer ASN: O-828053) and deployed to the Mediterranean Theater of Operations in August 1944. There he served as a combat pilot with the Tuskegee Airmen operating from Ramitelli Air Base, Italy assigned to the 301st Fighter Squadron, 332nd Fighter Group (Red Tails”), 15th Air Force. On 1 April 1945, Lt Manning was on a bomber escort mission to St. Polten, Austria flying his Mustang P-51B -15-NA-42-106943 with eight other planes in his flight. In the Wels, Austria area, about 15 miles southwest of Linz, Austria the squadron became engaged in a dog fight with Luftwaffe aircraft. Lt Manning was shot down in the Wels area but was able to bail out. He shot down an FW-190 just prior to his own loss. F/O William P Armstrong, ASN: T-66139 was also shot down in this same action, KIA crashing with his plane. Fellow Tuskegee Airman Harry Stewart (Top Gun Awardee), then also a lieutenant in the 301st Fighter Squadron, flew alongside Manning that Easter morning in 1945. They had been together at Tuskegee Institute, the Alabama university where black pilots trained. He remembered his friend as “outgoing and affable – a powerful swimmer who did laps in the institute’s Olympic-size pool”. “He wanted to fly, (Stewart remembered), in the worst way.” In the dogfight that Easter morning over the Danube River, Manning and Stewart and five other Tuskegee men, flying their distinctive red-tailed P51s, took out a dozen German fighters. After his plane was struck, Manning ejected, drifting slowly down in his chute toward a group of angry civilians forming on the ground below. On the morning of April 3, 1945, 2nd Lt. Walter P. Manning of West Philadelphia sat in a jail cell at a Nazi air force base in Austria. There was a lynch mob at the door, their ropes at the ready. He had flown more than 50 missions, and six times was awarded the Air Medal for heroism. He had a fiancée, whose picture he kept close. He was not yet 25. Outside his cell, the mob was waiting. They were primed to do just what Nazi propaganda instructed: to murder black pilots in the same way Americans murdered black Americans in their own country. Now, Manning had escaped death twice in the last two days. First, when he bailed out of his plane after a dogfight, where he’d just taken out a German fighter. And secondly, when a local policeman pulled him from the mob that greeted his parachute where he landed near Linz. According to historian & author Georg Hoffmann, "Manning was to be lynched by a local group leader, but this was initially prevented by military soldiers, and he was then taken to relative safety at the airfield Horsching. However, local party officials and Nazi officers gained access to Manning and took him to the Lynchjustiz Days, where Manning was severely mistreated and finally hanged in front of the Horstkommandantur, with a blackboard round his neck, saying, 'We (Germans) are fighting back'. The lynching of Lt. Manning, the only black combat aviator known to have been hanged in Austria during World War II, was never enshrined in museums, let alone noted in the America’s major newspapers. In a war that shaped the American consciousness, there are still shamefully forgotten horrors such as the murder of Lt. Manning. And this one is particularly chilling because it draws upon the sins of our own past. It is particularly tragic that the case was quickly forgotten in the USA. The perpetrators were known, but they were never questioned and never taken. Manning's mortal remains lie in a French military cemetery." Now, more than seventy years after the war, historians have begun to focus on the terrifying and largely forgotten Nazi phenomenon of Fliegerlynchjustiz (Aviator Lynch Justice). With the air war all but lost by 1943, the Nazis incited citizens to kill any captured Allied pilots. Historians have discovered 150 Allied pilots – 101 Americans – who were murdered on the ground, most by civilians. White fliers got beatings or bullets. Manning got a rope Manning is buried in the Lorraine American military cemetery in France. The Austrian military placed thus plaque in honor of 2LT Walter Manning on the 73rd Anniversary of his death.