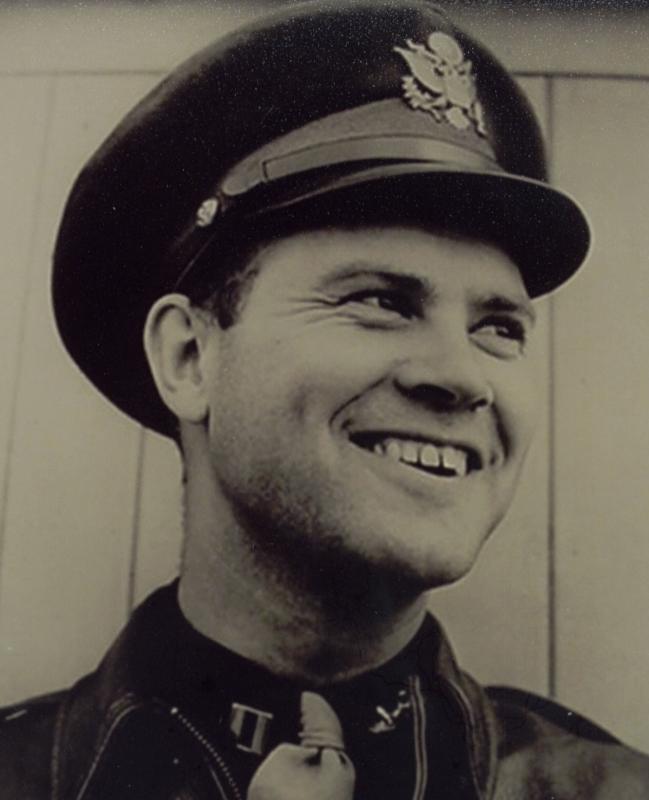 Captain was Robert Harwood “ Shine” Shannon born on February 11, 1916 and was from Washington, Iowa. He was a Crew member ( Pilot ) on the B-24 Liberator “Hot Stuff (41-23728) assigned to the 330th Bomb Squadron, 93rd Bombardment Group (Heavy), 8th Air Force, U.S. Army Air Forces (World War II; European Theater of Operations) flying combat mission's out of RAF Bovingdon, England. “Hot Stuff” was the first US Bomber to complete 25 missions, 25th mission on February 7, 1943, against long odds at a time when many planes were being shot down. Hot Stuff became the first heavy bomber in the 8th Air Force to complete twenty-five missions in Europe in World War II and reached its 25th mission three-and-a-half months before the widely celebrated B-17 "Memphis Belle". After Hot Stuff completed thirty-one missions, the plane and her crew were on the return flight to the states for a War Bonds publicity and morale-boosting tour on May 3, 1943, and Lieutenant General Frank M. Andrews, Commander of the European Theater of Operations needed to get back the states as he had been summoned to Washington DC by the General of the Army, George Marshall. Andrews and his entourage hitched a ride on Hot Stuff, and in doing so bumped five crew members. Though they were supposed to refuel at Prestwick, Scotland before heading out over the Atlantic, the crew elected to skip stopping at Prestwick and proceed to their next waypoint, Reykjavik, Iceland. They arrived to find the weather at their destination quite dicey with snow squalls, low clouds and rain. After several aborted attempts to land at the Royal Air Force station at Kaldadarnes, Iceland, the B-24 crashed into the side of 1,600-foot-tall Mount Fagradalsfjall, near Grindavik, Iceland. Upon impact, the aircraft disintegrated except for the tail gunner’s turret which remained relatively intact and 14 of the 15 aboard died except the tail-gunner Sgt Eisel who, though injured, survived the crash. Shannon died in this crash. A monument remembering the achievements of “Hot Stuff”; the May 3, 1943 crash and LTG Andrews is located in Iceland in Grindavik. FROM FIND GRAVE: Washington (IOWA) - The body of Capt. Robert H. Shannon, one of the pilots of the airplane in which Gen. Andrews and Bishop Leonard lost their live when the plane crashed in Iceland during the war, will be buried in Elm Grove cemetery at 3 p.m. Sunday. Dr. Fred E. Miller, pastor of the Washington Methodist church, will officiate at the graveside service. The body is at the Jones funeral home. Capt. Shannon was born Fe.b 12, 1916, and attended schools in Washington. He enrolled at the State University of Iowa, where he was studying when he enlisted in the army air corps. He was sent overseas, and his squadron was the first heavy bomber squadron to fly overseas, flying Liberator B-24‘s. Capt. Shannon had flown over 50 missions, flying from bases in Africa and England, and was on his way to the United States at the time of the fatal crash, which happened May 3, 1943. Surviving are his parents, Mr. and Mrs. R. E. Shannon of Washington, a brother, William Shannon, Washington, and a sister, Mrs. Virginia West, of Adel. Also surviving is the maternal grandmother, Mrs. J. A. Harwood, of Washington. Shannon's father is editor and publisher of the Washington Evening Journal. (Hawk-Eye Gazette, Burlington, IA, Saturday, Nov. 29, 1947, p, 2, Col. 6) The website "A Story of Triumph & Tragedy" honors the crew and passengers. It is http://stridsminjar.is/hotstuff/ and is reference for this entry.