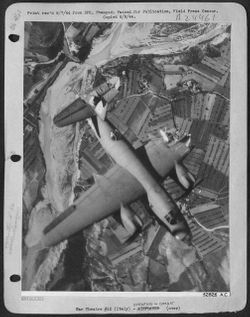 Norford Meador was from West Virginia and was the Bombardier on B-26 (42-107566) as part of the 441st Bomber Squadron, 320th Bomber Group. On July 10, 1944, the Group was missioned to bomb the northern span of a railroad bridge in Marzabotto, Italy. Enroute to the target, the plane received a direct hit of anti-aircraft fire. The direct hit blew the left wing and horizontal stabilizer off, sending the plane into an uncontrollable spin and trapping the crew inside. A photographer in a plane above, captured the monument just before the plane’s impending doom; an iconic photo depicting the great sacrifice of the United States Army Air Forces during the war. (See the pictures for this iconic photograph). The B-26, with bombs still aboard crashed into a hill just outside Lamadi Reno. (Reference: Missing Aircraft Report {MACR} 6454) FROM FIND A GRAVE: THE SUNDAY REGISTER, BECKLEY, RALEIGH COUNTY, WEST VIRGINIA, SUNDAY MORNING, JULY 30, 1944, PAGE NINE NORFORD MEADOR MISSING IN WAR HINTON--Mrs. Jack Meador was notified Saturday that her nephew, Norford Meador, 27, of Charleston, had been missing in action over Italy since July 10. He was bombardier on an army bomber. THE CHARLESTON DAILY MAIL, CHARLESTON, WEST VIRGINIA, SUNDAY MORNING, DECEMBER 30, 1945, PAGE THREE ARMY GIVES AIR MEDAL POSTHUMOUSLY TO MEADOR Word has been received of the posthumous awarding of the Air Medal to Pfc. Norford G. Meador, air corps, son of Giles T. and Mary Meador of 1511 Pennsylvania av. The citation is for meritorious achievement as a bombardier during a bombing attack over Collechio, Italy. Pfc. Meador was reported missing in action in July, 1944 and was reported killed in action June 28, 1945. A graduate of Charleston high school, he was a carpenter prior to his entrance in the service Aug. 7, 1941. He was a member of the Liberty Primitive Baptist church. Surviving besides his parents is a brother, Emory, at home. THE CHARLESTON DAILY MAIL, CHARLESTON, WEST VIRGINIA, TUESDAY EVENING, NOVEMBER, 29, 1949, PAGE TWENTY MEADOR SERVICE SET AT ST. LOUIS Mass service for Pfc. Norford G. Meador of Charleston and fellow crew members of a B-26 who died in action on July 10, 1944 over Collechio, Italy, will be held Dec. 7 at 1:30 p.m. at the National cemetery at St. Louis, Mo. Pfc. Meador, a graduate of Charleston high school, was th son of Mr. and Mrs. Giles T. Meador of Riverview. An air medal for achievement as bombardier was awarded to him posthumously. He had participated in a raid the day before his death in which his plane helped to destroy a large ammunition dump in Italy.