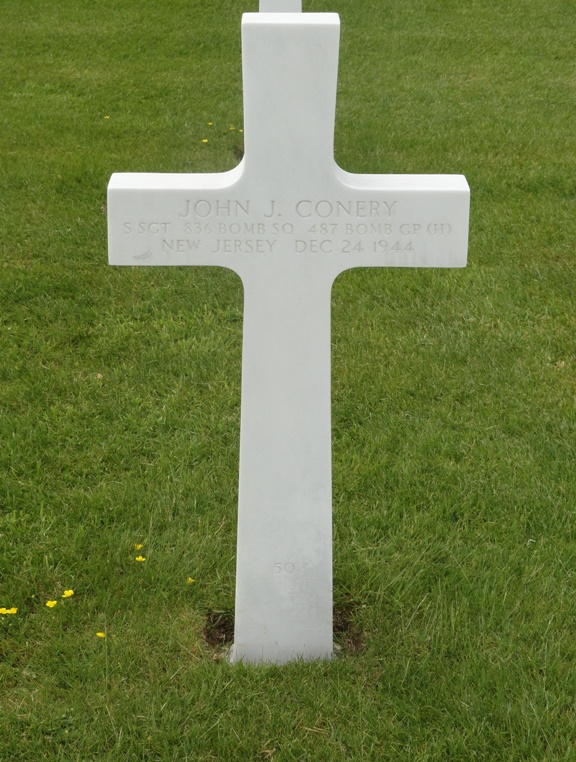 In 1940 the family lived at 11 Third Street, Newark, New Jersey. He completed three years of high school, and registered for the draft at Newark on February 14, 1942. He was 5 feet 11 inches tall, weighed 165 pounds, and had brown eyes and brown hair. At that time he lived at home and worked for the Breeze Corporation in Newark, a manufacturer of aircraft electrical systems, aircraft manifolds, and electric motors. He worked as an electrician and was single when he enlisted in the U.S. Army at Newark, New Jersey on October 28, 1942.

On December 24, 1944, the 8th Air Force launched mission #760, the largest aerial mission of the war, which involved more than 2000 heavy bombers. The mission was to bomb German airfields and supply lines, to stop the German offensive in the Ardennes known as the Battle of the Bulge. The 487th Bomb Group led the entire 8th Air Force on this mission. Lt Ball's crew flew B-17G 43-37569 in the number five position of the 487th Bomb Group's Low Squadron. The 487th Bomb Group's target was the airfield at Babenhausen, Germany, but the formation was attacked by German fighters before reaching the target. S/Sgt Conery and six of his crewmates were killed in action when their aircraft was shot down by German fighters south of Liege, Belgium. The aircraft broke up and most of the wreckage fell in the Ambleve River at Gouffre d'Aywaille, at about 50.4763°N, 5.6577°E. (Gouffre d'Aywaille is the gulf of the Ambleve River near Aywaille—a wider, deeper section of the river just west of Aywaille.) The tail section fell in a small stone quarry near the hamlet of Chambralles, just west of Septroux, Belgium. Two men survived.