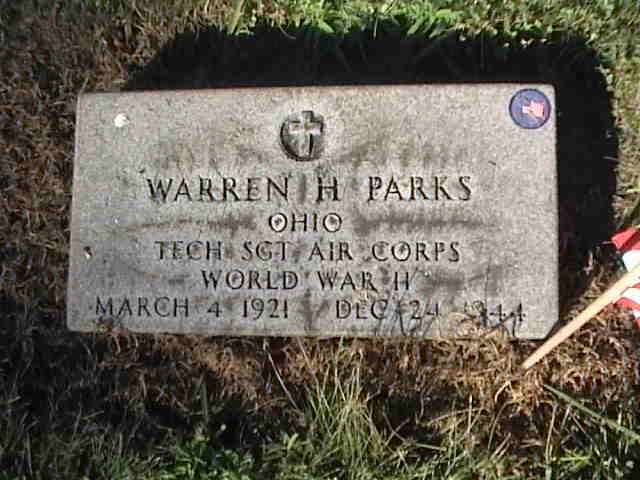 He graduated from Petersburg (Ohio) High School, and worked at the Petersburg Milling Company, a grain milling company. His wife was Pearl M. (Wentz) Parks. They married on June 6, 1941. He enlisted in the U.S. Army at Cleveland, Ohio on February 13, 1943. In 1944 his wife lived at New Springfield, Mahoning County, Ohio, which was his home of record.

He completed Army Air Forces flight engineer and aerial gunnery training, and was assigned as engineer-gunner on the heavy bomber crew of Lt Ira L. Ball, in the 836th Bomb Squadron of the 487th Bomb Group. This Group was based at Army Air Forces Station 137 near the village of Lavenham, Suffolk, England, and was part of the 8th U.S. Army Air Force in Europe.

On December 24, 1944, the 8th Air Force launched mission #760, the largest aerial mission of the war, which involved more than 2000 heavy bombers. The mission was to bomb German airfields and supply lines, to stop the German offensive in the Ardennes known as the Battle of the Bulge. The 487th Bomb Group led the entire 8th Air Force on this mission. Lt Ball's crew flew B-17G 43-37569 in the number five position of the 487th Bomb Group's Low Squadron. The 487th Bomb Group's target was the airfield at Babenhausen, Germany, but the formation was attacked by German fighters before reaching the target. T/Sgt Parks and six of his crew mates were killed in action when their aircraft was shot down by German fighters south of Liege, Belgium. Most of the aircraft wreckage fell in the Ambleve River near Aywaille, Belgium.