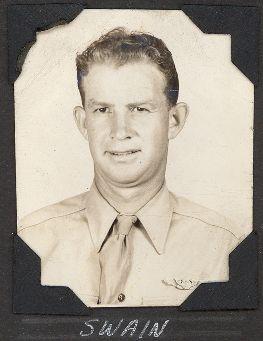 Lawrence Harvey Swain was born at Templeton, San Luis Obispo County, California, on June 5, 1914, and later resided at Hollister, San Benito County, California. He was one of at least six children of Geroma Blaine 'Jerry' Swain (18 Dec 1881 – 21 May 1944) and Harriet Viola 'Hattie' (Kester) Swain (1888 – 1927), who were born in California. His parents married at San Luis Obispo, California on December 24, 1906. His father was a farmer. He lost his mother when he was about 13 years old.

He completed Army Air Forces radio operator and aerial gunnery training, and was assigned to the heavy bomber crew of Lt Robert W. Harriman in the 836th Bomb Squadron of the 487th Bomb Group, at Army Air Forces Station 137 near Lavenham, Suffolk, England. The Harriman crew arrived at Station 137 by July 5, 1944, and became part of the 8th U.S. Army Air Force in England.

On December 24, 1944 the 8th Air Force launched mission #760, the largest aerial mission of the war, which involved more than 2000 heavy bombers. The mission was to bomb German airfields and supply lines, to stop the German offensive in the Ardennes known as the Battle of the Bulge. Lt Harriman's lead crew was chosen to lead the 487th Bomb Group, which led the entire 8th Air Force that day.

Brigadier General Frederick W. Castle, Commanding Officer of the 4th Bomb Wing, flew as air leader with Harriman's crew. The 487th Bomb Group's target was the airfield at Babenhausen, Germany, but the formation was attacked by German fighters before reaching the target. T/Sgt Swain and four of his crewmates were killed in action when their aircraft, B-17G 44-8444, was shot down by German fighters south of Liege, near Rotheux-Rimiere, Belgium. He was found dead in an open field without his parachute. His watch had stopped at 1252 hours GMT. Belgian eyewitnesses reported, “We saw a failing parachute, which was maybe on fire, descending rapidly on Moulin. This had to have been Lieutenant [T/Sgt] Swain.”

He was buried initially at the U.S. Military Cemetery Fosses #1 at Fosses-La-Ville, Province of Namur, Belgium in plot K148. After the war his remains were permanently reinterred at Henri-Chapelle American Cemetery, Henri-Chapelle, Belgium. He has a cenotaph on the Swain family grave marker at Templeton Cemetery, San Luis Obispo County, California.