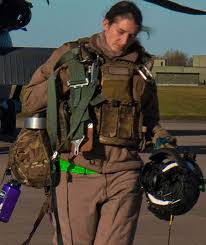 Afton Marie Thornton Ponce was born on February 22, 1985 in Priest River, Idaho, the daughter of Therien M. Thornton. She was a 2003 graduate of Priest River Lamanna High School and joined the Air Force in 2004. She was assigned to the Honor Guard and served in more than 490 ceremonies at Arlington National Cemetery. She eventually retrained to become an aerial gunner and moved to Nellis Air Force Base, Nevada. Assigned to the 56th Rescue Squadron at RAF Lakenheath, England, she was killed during an HH-60G Pave Hawk helicopter crash while performing a low-level training mission on the Norfolk coast, Jan. 7, 2014. A small flock of geese that had migrated to a new area caused the HH-60G to crash off the English coast, killing the four airmen aboard.

The remains were transferred to a local hospital and then flown to Dover Air Force Base, Del., with full military honors. SSgt Ponce is now buried in the Clark Fork Cemetery, Clark Fork, Bonner County, Idaho, USA.