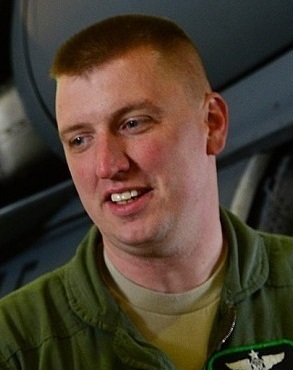 Dale Eric Mathews was born on May 7, 1976 in New Carlisle, St. Joseph County, Indiana. He entered active duty out of high school in 1994. He was first assigned to Tinker Air Force Base, Oklahoma, and deployed twice under Operations Southern Watch and Desert Thunder with the 552nd Component Repair Squadron. He retrained, became a flight engineer and flew on Mi-17s and HH-60s. Mathews deployed to Afghanistan in 2012. He was assigned to the 56th Rescue Squadron at RAF Lakenheath, England when he was killed during an HH-60G Pave Hawk helicopter crash while performing a low-level training mission on the Norfolk coast, Jan. 7, 2014. A small flock of geese that had migrated to a new area caused the HH-60G to crash off the English coast in January, killing the four airmen aboard.

The remains were transferred to a local hospital and then flown to Dover Air Force Base, Del., with full military honors. TSgt Mathews is now buried in the Arlington National Cemetery, Arlington, Arlington County, Virginia, USA.