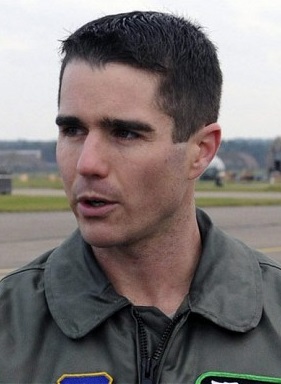 Sean Michael “Hollywood” Ruane was born on October 11, 1982 in Pittsburgh, Allegheny County, Pennsylvania. He was the son of Michael and Marcia (Boronsky) Ruane, the husband of Rachel (Roderer) Ruane and had one son. Sean graduated in 2000 from Montour High School and in 2005 from Embry Riddle Aeronautical University, studying International Relations and Research Meteorology. Upon graduation, he entered the U.S. Air Force active duty and began undergraduate pilot training. Sean first mastered the UH-1H Huey helicopter, earning his pilot wings in 2007, and officially became a U.S. Air Force Pilot.

Enrolling in the 512th Rescue Squadron's HH-60G training class, he learned the HH-60G Pavehawk helicopter and tactics that would enable him to save lives in combat as part of the 41st Rescue Squadron. He was deployed four times to the battlefields of Iraq and Afghanistan. Meanwhile, he quickly advanced to Aircraft Commander and then on to HH-60G Flight Lead. He was then selected to become an HH-60G Instructor Pilot, and teach others the mission of Combat Rescue.

Joining the 56th Rescue Squadron in England, he further advanced as an Evaluator Pilot, and was subsequently selected as the squadron's Chief of Standardization and Evaluation section, ensuring the aircrew within the squadron upheld the highest professional and aviation standards. He was again deployed to Afghanistan in summer of 2013 as the Flight Lead of a formation of two Pavehawk helicopters and 14 aircrew. He led his formation in combat while deployed and in training while at home, all the while working on a master's degree in American History. His potential was recognized with his new promotion to Operations Group Executive Officer.

Sean was killed during an HH-60G Pave Hawk helicopter crash while performing a low-level training mission on the Norfolk coast, Jan. 7, 2014. A small flock of geese that had migrated to a new area caused the HH-60G to crash off the English coast in January, killing the four airmen aboard.

The remains were transferred to a local hospital and then flown to Dover Air Force Base, Del., with full military honors. CPT Ruane is now buried in the Resurrection Cemetery, Coraopolis, Allegheny County, Pennsylvania.