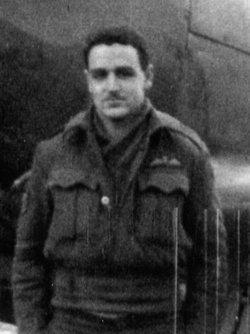 Killed in action. From American Air Museum BritainFlight Sgt Frederick Carleton Austin (1918-1942), born Omaha, Nebraska, U.S.A.; prior to the war was employed as an Investigator by Pinkerton Detective Agency; enlisted Royal Canadian Air Force, 30-8-40; carried out his pilot training at No. 8 F.T.S. (R.C.A.F.), Eburne, B.C. and No. 3 S.F.T.S., Calgary, Alberta; gained his Pilot's Flying Badge 28-3-41; arrived in England September 1941; posted to 56 O.T.U. the following month, and converted to Hurricanes; advanced to Flight Sergeant 1-12-41, and posted to 133 (Eagle) Squadron (Hurricanes), Eglinton, December 1941; the squadron converted to Spitfires and moved to Kirton-in-Lindsey, January 1942; on the 31st 'Convoy Patrol. No E/A sighted. My First Operational Flip' (Log Book refers); over the following two months the squadron was mainly tasked with east coast convoy patrols and sector recces; posted to 121 (Eagle) Squadron (Spitfires), North Weald,1-4-42; carrying on in a similar capacity Austin grew in experience, 3-4-42, 'Sweep. minor Channel sweep - my first sight of France' and 12-4-42, 'Convoy Patrol. Bugger All!!! - First time as No. 1 - we improve' (ibid); however, as the Squadron Operations Record Book shows it was sadly too little too late, 17-4-42: 'At 11.40 hours the North Weald Wing took off for a Sweep over France. The coast was crossed at Hawkinge at 12.10 hours and landfall made at Le Touquet and out via Gravelines via Guines. The Squadron flew at 26,000 feet during these operations, the purpose of which was to create a diversion and keep a look out for Enemy Aircraft going to meet our Bombers, which were making a raid on a Parachute Factory at Calais. The Bombers were performing this task simultaneously with our arrival at Le Touquet. Hornchurch, Biggin Hill and Debden Wings were covering the Bombers. Although Enemy Aircraft were seen no engagements took place, and Pilots returned to base at 12.50 hours. At 15.10 hours the Wing was airborne again on a Fighter Sweep. Southend was reached at 15.34 hours, Dover 15.59, St. Inglevert 15.57, and Lumbres 16.04. The French coast was left at Boulogne. Our Squadron flew at approximately 27,000 feet and was top cover. F/Lt. Allen and P/O Fetrow fired at a F.W. 190 but observed no results. This occurred roughly 10 miles east of St. Omer in both cases. F/O Edner while 15 miles east of St. Omer fired a 3 second burst from 400 yards at a F.W. 190 at 9,000 feet, he saw bullets entering the fuselage, he fired again at 5,000 feet, a 3 second burst was seen to strike at 400 yards range. The Enemy Aircraft was not seen to be affected by these hits. F/O Edner says that in all cases he is sure his bullets pierced the Enemy Aircraft although it would be difficult, I should say, to be certain at a range of 400 yards. F/O Smith got into difficulties, and had his tail plane practically shot off by enemy action. He himself did not engage the enemy, he landed in this condition at Manston. F/Sgt Austin of this Squadron is missing from these operations. Pilots landed at North Weald at 16.45 hours.' Austin's Spitfire AD498 was claimed by JG26. He crashed at Hardighen, France, where he was also buried. Awards - 1939-1945 Star; Air Crew Europe Star; Canadian Volunteer Service Medal, with Maple Leaf clasp; War Medal, Canadian Memorial Cross.