<< Back to Curio- Monte Gheggio 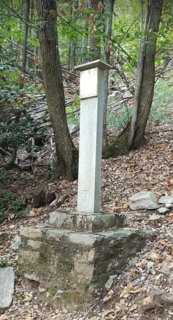 On the Sentiero della Pace (Trail of Peace) about an hour walk from the trailhead.

The memorial includes an information panel and an engraved stone about 6 feet high.

A local elementary school developed the program, trail and information panel for Callaway.

The monument remembers Flight Officer Charles R. Callaway, Co-Pilot the pilot of B-25 “Spider’s Frolic Pad, (43-27737) who was killed here after bailing out of the aircraft.

On March 21, 1945, B-25 (43-27737) “Spider’s Frolic Pad” Tail #42 was on a mission to bomb a railroad bridge at Campo di Trues, near the Brenner Pass.  The plane was part of the 446th Bomber Squadron, 321st Bomber Group, 57th Bomber Wing, of the 12th Air Force.  Departing Solenzara, Corsica, the plane was part of a 15 plane mission to bomb this heavily defended site.  After dropping its bombs, the plane was hit by flak and lost an engine.  The Pilot, Captain Herman Everhart, who was on his 60th mission, attempted to fly the plane to find a site to make an emergency landing.  Over Switzerland, near the Italian border by Lake Lugano, Everhart directed the crew to bail out.  The crew bailed out; four safely landed and were interned by the Swiss Government.  The Co-Pilot, Flight Officer Charles Callaway’s parachute didn’t open and he died upon impact on Monte Gheggio near Curio, Switzerland (A memorial remembers Callaway in Curio).  Everhart bailed out last and while coming down was shot by the enemy on the ground and killed.  Observers of the incident on both sides of the border yelled at the enemy for murdering the pilot.   A memorial remembers Captain Everhart located on the side of the Basilica SS Crocifisso (Holy Cross) in Lavena Ponte Tresa.  (Reference Missing Aircraft Report {MACR}: 13203.

See Site Lavena Ponte Tresa (Italy) for more on the Captain  Everhart memorial just across the border in Italy.

Special thanks for the B-17 Museum in Utzenstrorf, Switzerland for information concerning this crash.  For more on the B-17 Museum Utzenstorf, see the museum website at https://www.b17museum.ch

The text on the plaque iw written in Italian and reads:

To the Flight Officer from the United States

The people of the Malcontense Valley 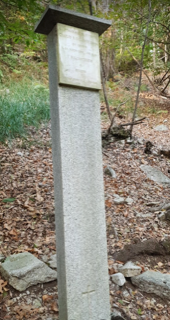 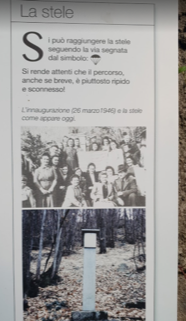 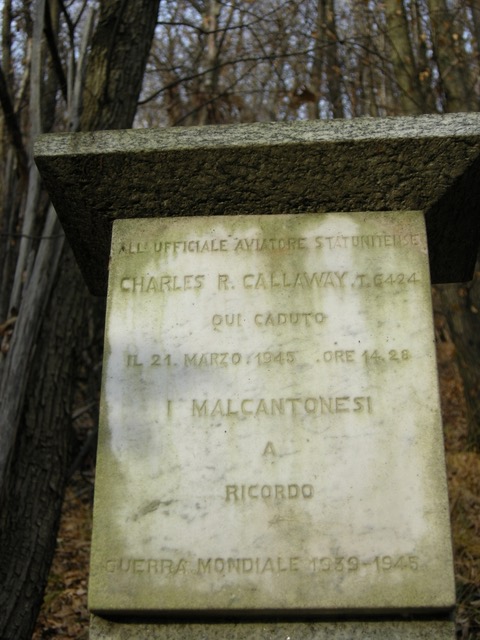 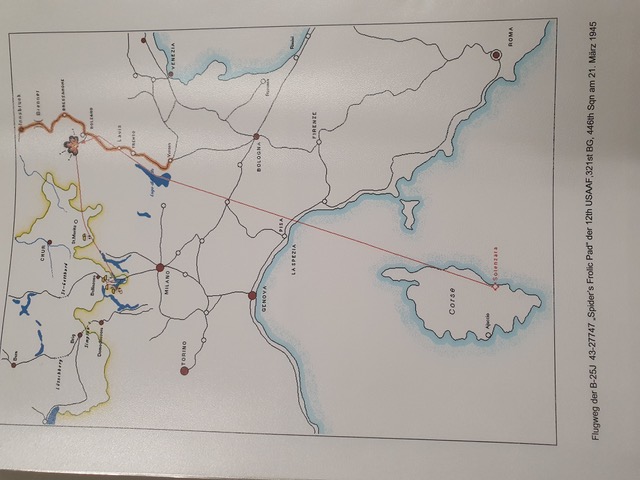 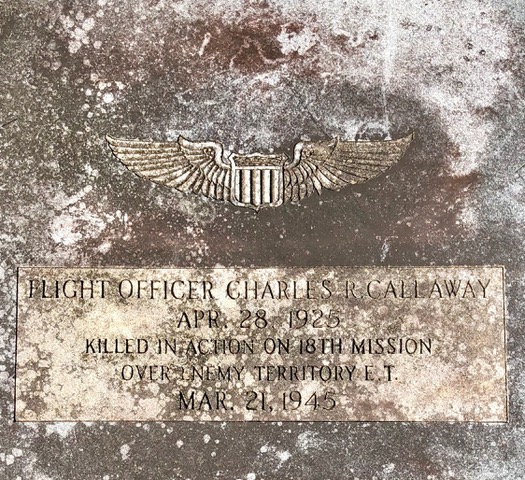 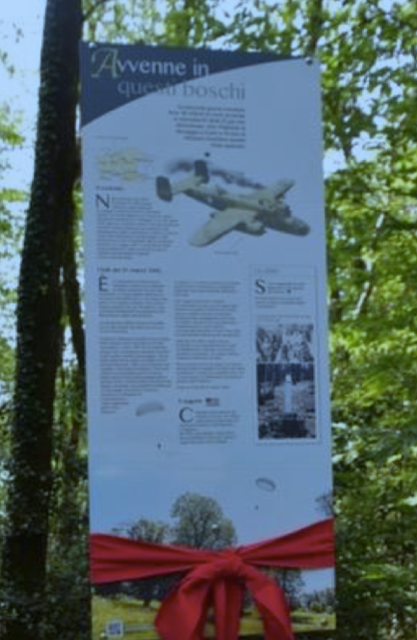 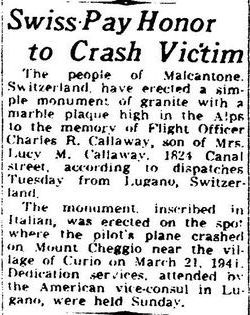 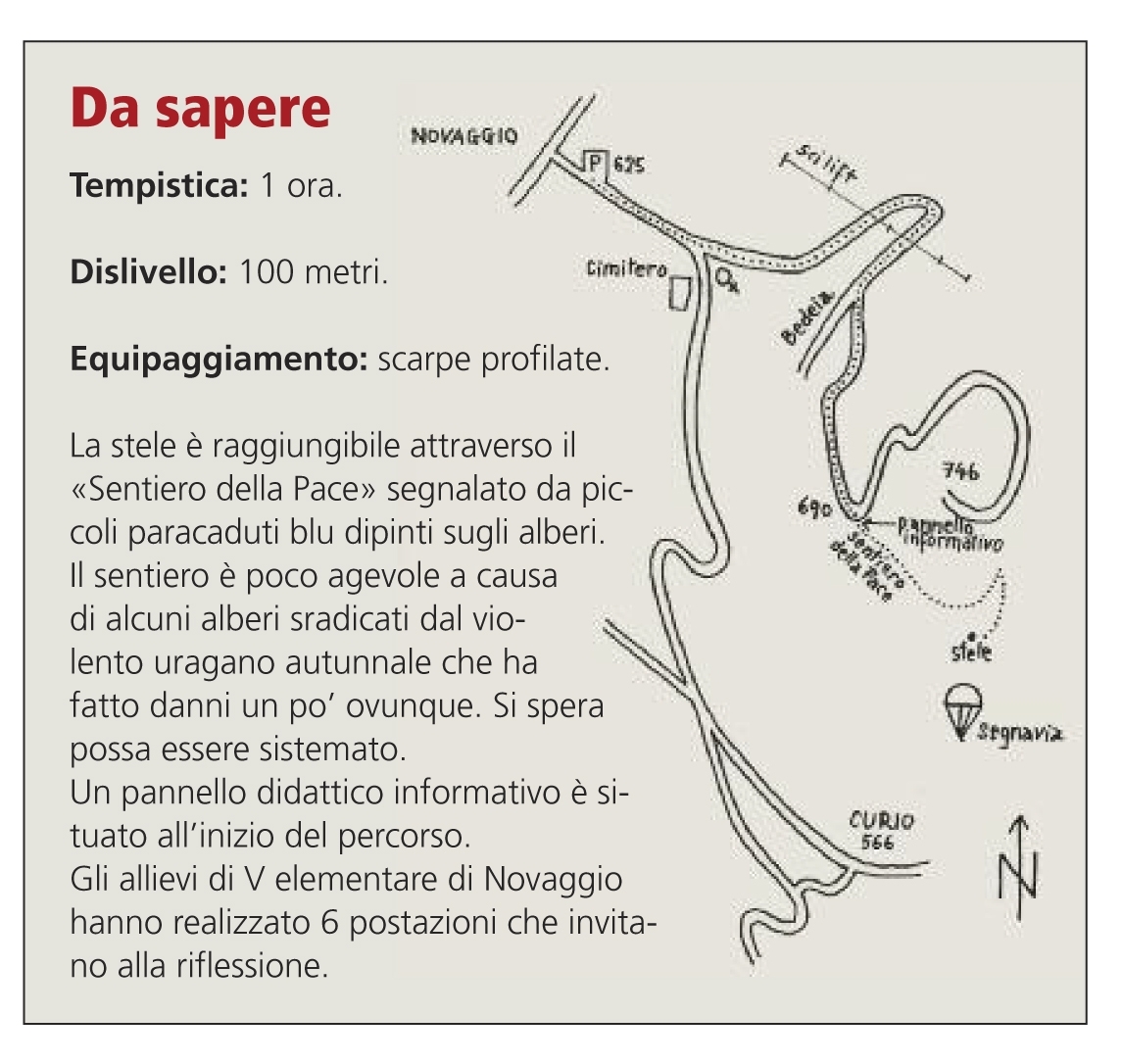