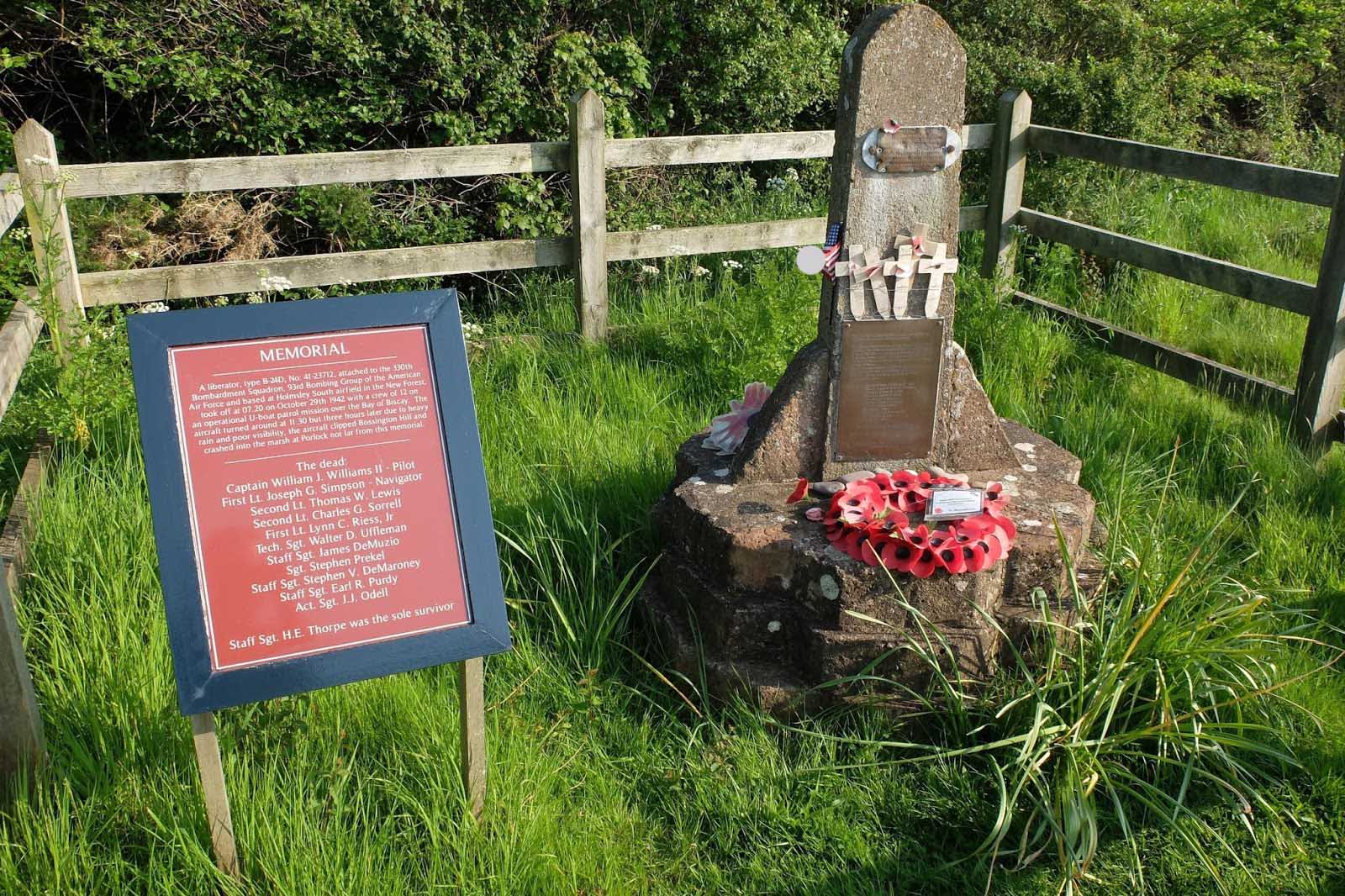 On the south side of the coast path.

A simple concrete obelisk monument with two plaques affixed on the obelisk. The upper plaque is a copper sheet and the inscription is written with hand punched stamps containing a commemoration message. The lower is a rectangular, metal, vertically oriented plaque containing the description of the event and the list of names of the crew. On the left-hand side of the monument is an info sign with a red background which also contains small details about the aircraft and the crash and also lists the crew names. The memorial was erected by the British Legion in 1945 and was originally situated on the coast at the back of the shingle ridge but was moved inland in 2006 so that people could access it more easily.

On 29th October 1942, B-24D #41-23712 “Ambros” crashed on Porlock Marsh having clipped the top of Bossington Hill in poor weather conditions: rain and low cloud.   There were 12 crewmen on board but was only one survivor: Staff Sergeant H B Thorpe. The Liberator, which was working for RAF Coastal Command,  had taken off at 7.20 am from Holmsley in Hampshire on a routine U-boat patrol mission over the Bay of Biscay.  On its return journey, at about 3.30 pm, it crashed in West Somerset.

OF THESE ELEVEN BRAVE U.S.A. AIRMEN

WHO DIED HERE ON OCTOBER TWENTY

Near this spot on 28th Oct 1942 a long range bomber of the United States Army Air Forces crashed.

The plane a Consolidated type B-24D Liberator No. 41-23712 attached to the 330th Bombardment Squadron, of the USA.A.F. and based at Holmsley South Airfield in the New Forest, took off at 7.20 on Oct 29, 1942 with a crew of 12 on an operational U-Boat patrol mission over the Bay of Biscay.

The aircraft turned around at 11.30 but three hours later due to heavy rain and poor visibility, the aircraft clipped Bossington Hill and crashed in the marsh at Porlock killing 11 of the crew.

This monument was erected by membrs of the Porlock

Branch of the British Legion.

The small plaque above was made from the

remains of the aircraft.

Air Force and based at Holmsley South airfield in the New Forest,

an operational U-boat patrol mission over the Bay of Biscay. The

aircraft turned around at 11.30 but three hours later due to heavy

rain and poor visibility, the aircraft clipped Bossington Hill and

crashed into the marsh at Porlock not far from this memorial. 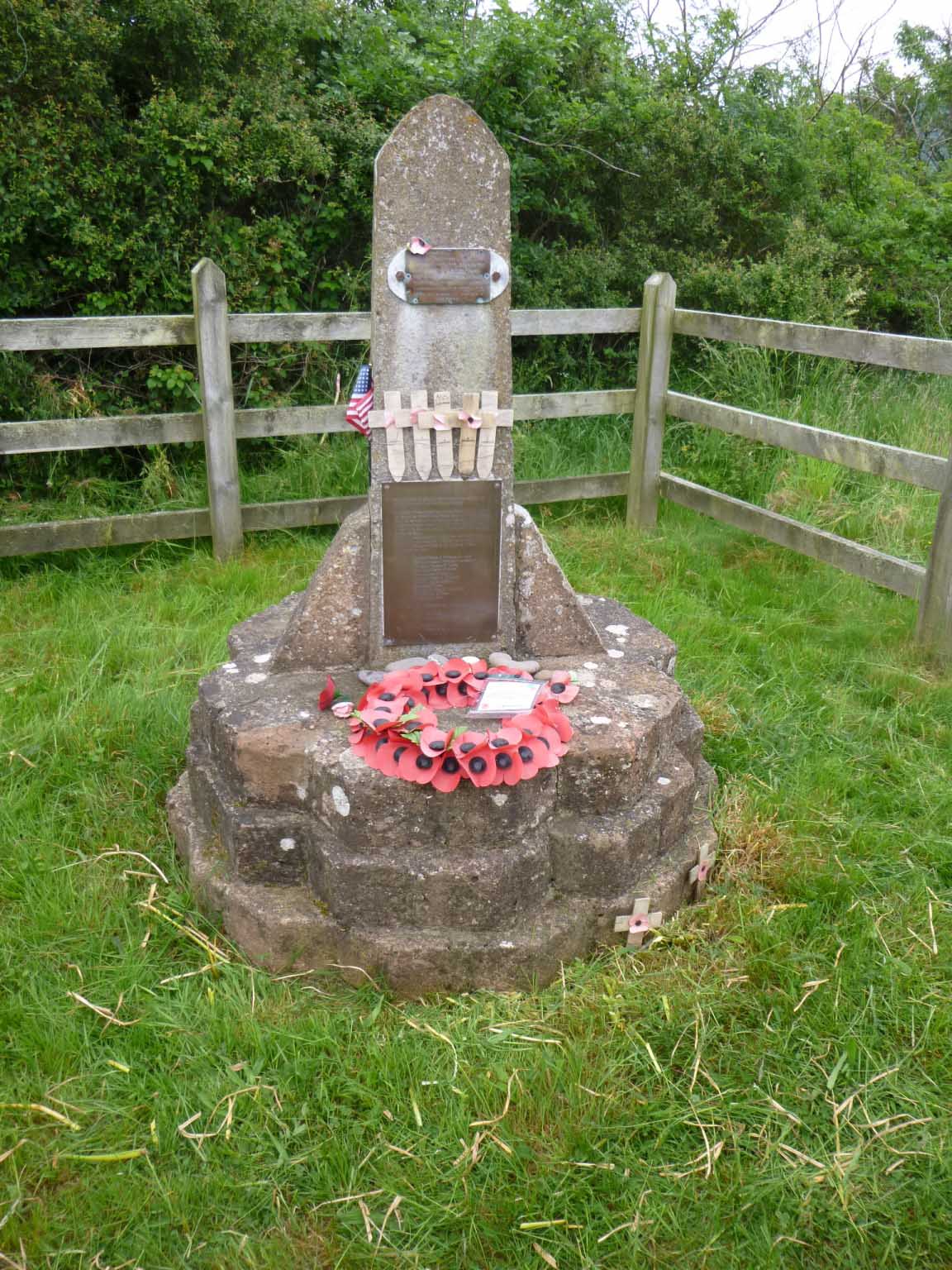 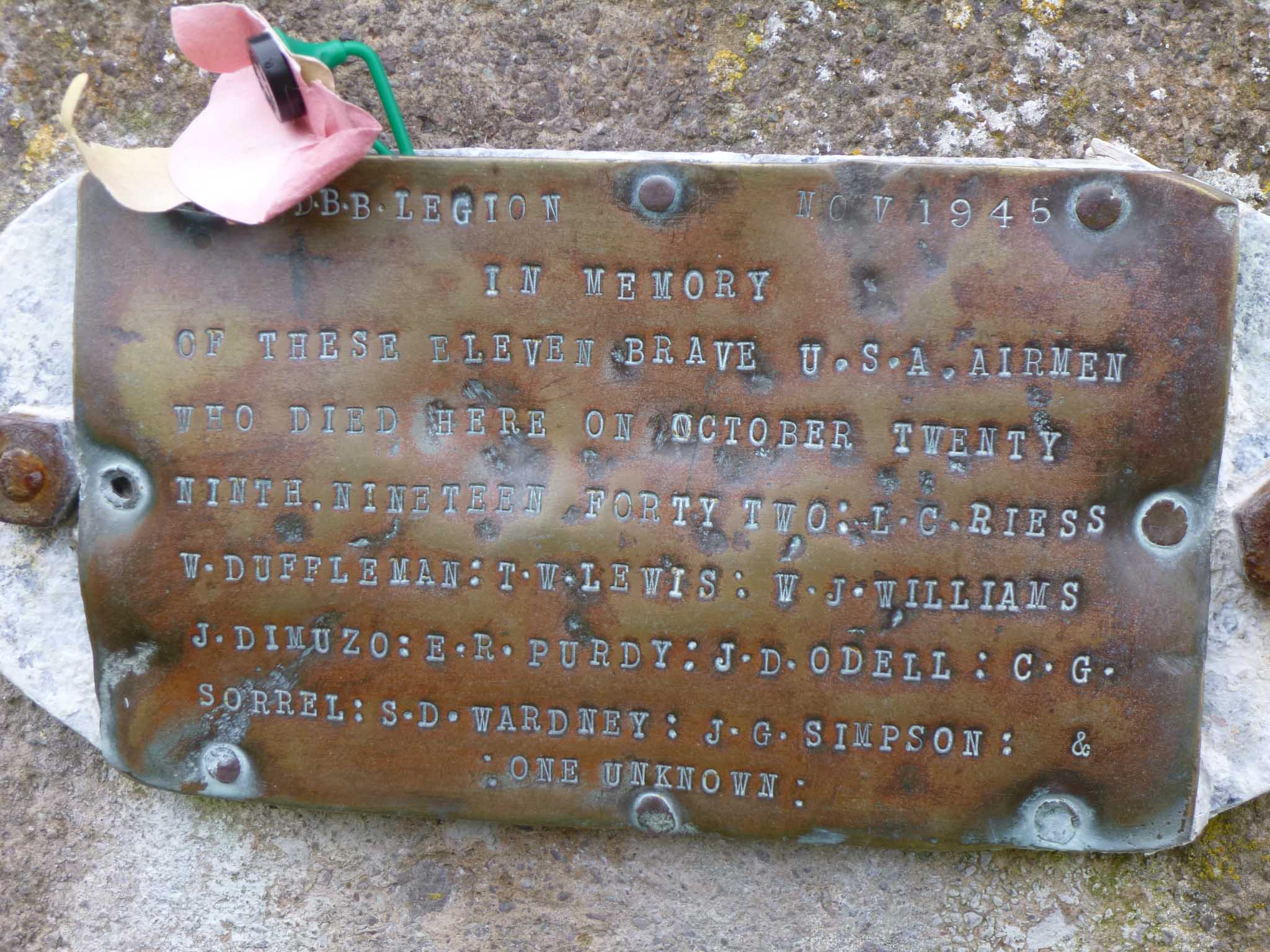 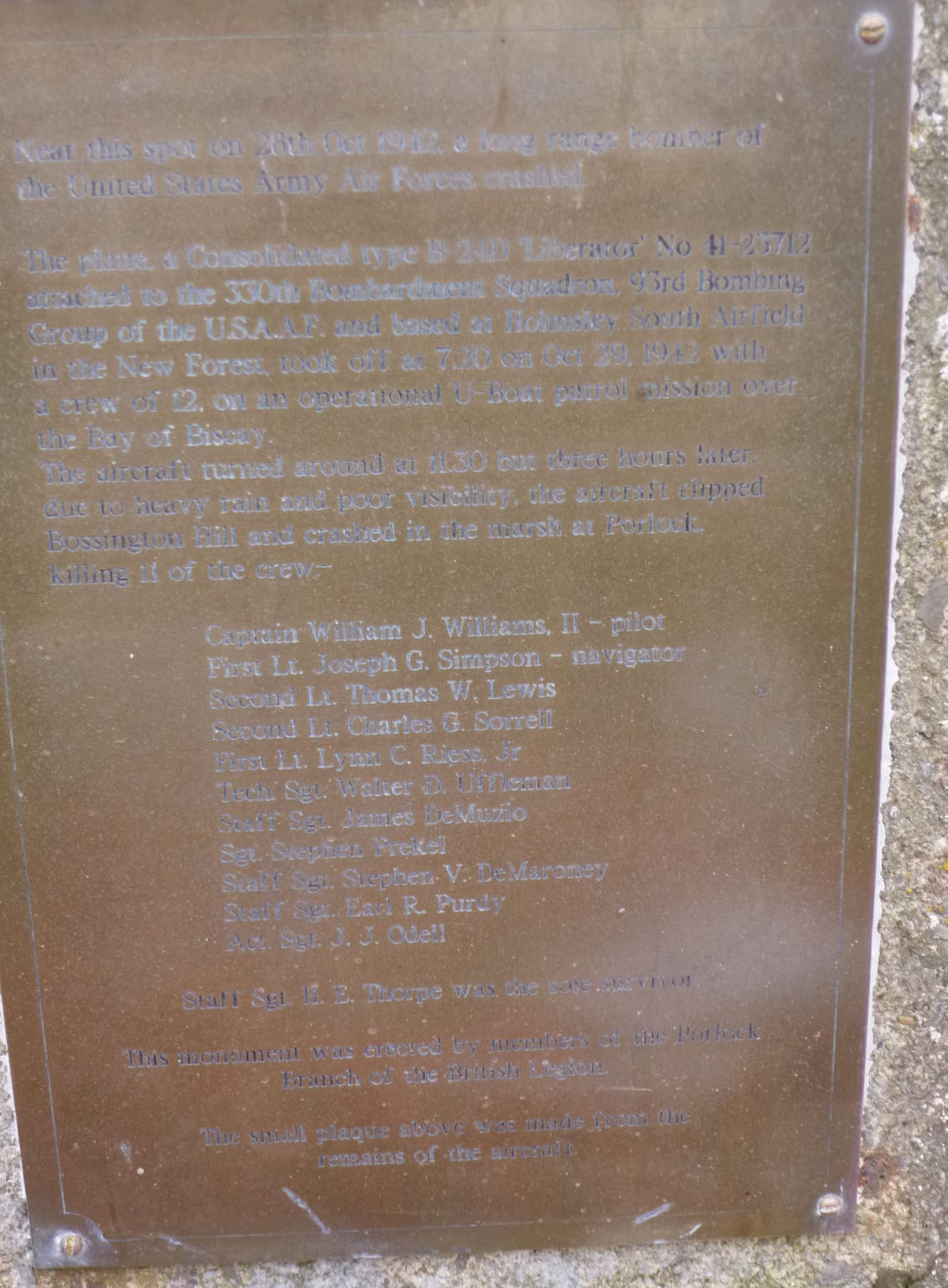 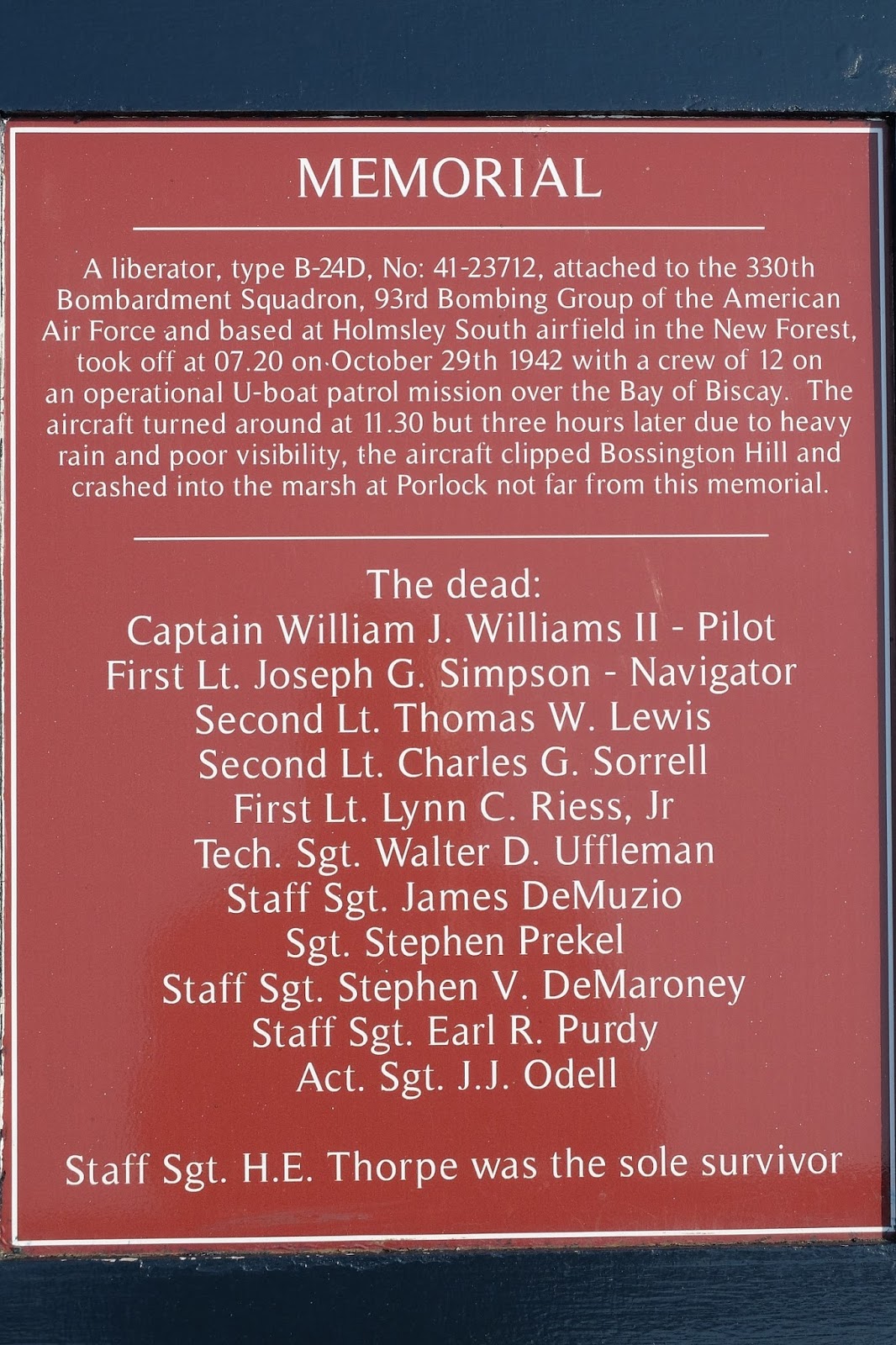