On the right-hand side of the monument.

A large rectangular metal board printed with inscription in English and black lettering on a light-green background. It is bordered by a metal frame supported by two metal poles. The board is also printed with various images like the dedication ceremony and the photos of all the crew members.

This memorial commemorates the ten crew of an American B-17 bomber who lost their lives when it crashed in the village during World War Two just after taking off from their homebase in nearby Horham.

Redlingfield Parish Council, with the help of the 95th Bomb Group Heritage Association in Horham and 95th Bomb Group Memorials Foundation in the US, unveiled and dedicated the memorial on Saturday May 15th 2010.

The memorial's black granite plaque lists the crew and shows the badges of the 8th US Army Air Force, the 95th Bomb Group and the 334th Bombardment Squadron. The Battle of Britain Memorial Flight's performed a flypast during the unveiling. Ann Stebbings, who was in Green Farm when the aircraft crashed, joined USAAF veteran S/Sgt Earl Joswick, who knew one of the crew members, to lay wreaths.

Especially moving speeches were made by Janie McKnight, president of the memorials foundation, whose father-in-law, David T McKnight was one of the first Americans on the scene of the crash, and USAF Lt Col Brent R Vosseller of RAF Lakenheath, a serving pilot. A bagpiper and a bugler added to the atmosphere as a crowd of some 200 filled the lane. The Royal British Legion, Royal Air Forces Association, Diss Air Cadets and the 95th's standard paraded. Thanks to generous contributions, from locals and The US, that the village raised the funds needed to erect this memorial.

On a frosty winter morning in 1943 B-17G 42-31123 crashed shortly after take-off. Villagers saw the bomber "fall out of the sky" on November 19th and the explosions which destroyed, Green Farm in Redlingfield, the home to two families. All ten crew of the B-17, which had its full load of bombs, ammunition and fuel on board, were killed but miraculously villagers escaped harm. A heavily pregnant Ruby Gooderham was in Green Farm with her two-year-old daughter Ann. She said "I was thrown across the room by the explosion and the ceiling came down on top of us ...the beams in the cottage held. Windows and doors fell in as parts of the burning plane fell. I picked up Ann and prayed to God to help us ...I felt as if I was in the front line."

One crew member survived the initial impact and explosions and was killed when the ninth 5OOlb bomb exploded. Only one of the ten bombs on board did not go off and was "picked up" by an RAF bomb disposal unit. The cause of the crash is not known but the brave young men who lost their lives that day are now remembered with this memorial.

Pictured below, from left, are: the ruins of Green Farm, the crash site and B-17G 42-31123. Pictured right are the crew. Colour photos are of the dedication of the memorial.

THE MEN WHO LOST THEIR LIVES:

a single printer from Illinois.

was a married chauffeur or

a single chauffeur or

was a divorced aviation

gunner. He has also been listed as 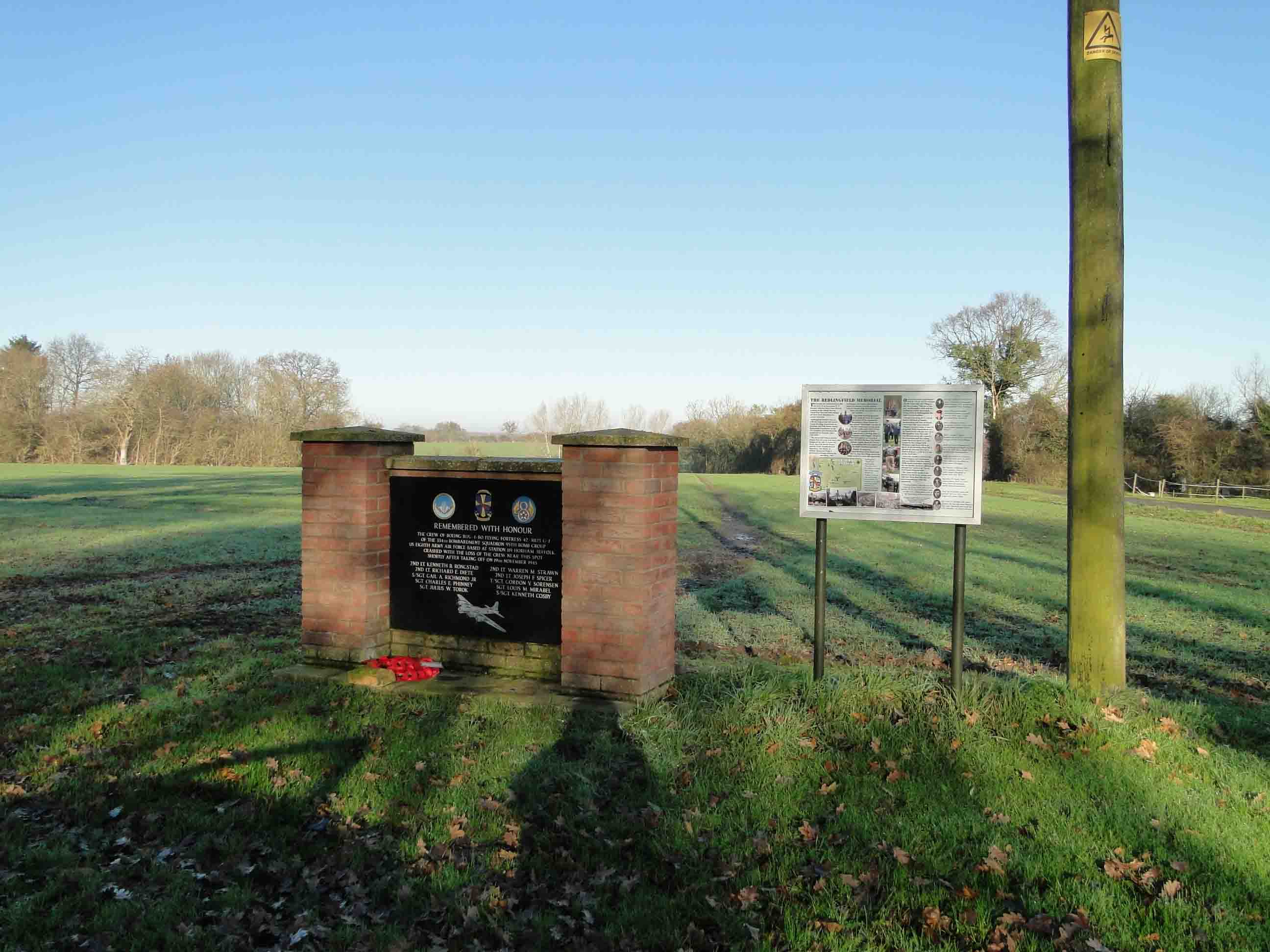