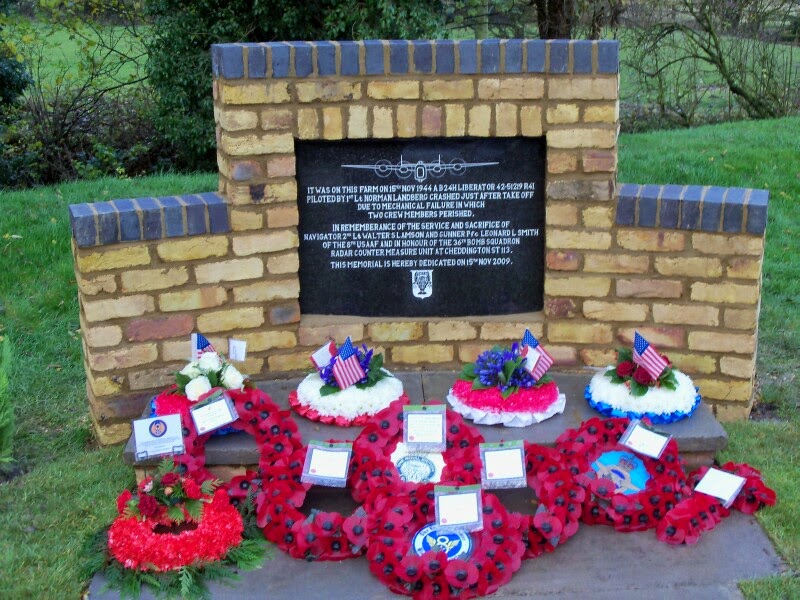 Near the edge on the northeast side of the farm. The memorial is placed near the grove of trees.

A shallow concave-plan, square-headed brick wall, housing a marble stone tablet at its center. The tablet is inscribed in English in white lettering. A front view of a B24H Liberator bomber aircraft is depicted above the inscription and the emblem of the 36th Bomb Squadron RCM below the inscription. The wall is topped by a blue brick header course. This monument commemorates the loss of two American airmen Walter Lamson and Leonard Smith, who died when their B24 Liberator crashed shortly after take-off at RAF Cheddington. These two airmen were members of Landberg’s crew and the crew was engaged in special ops, attached to RAF 100 Group.

Landberg’s B24 Liberator did not carry bombs, but top-secret radar-jamming equipment. His job was to fly lone missions, without any fighter support, over Germany, in advance of Lancaster bombing raids. Flying below the enemy radar, Landberg would circle a defined bombing area at an altitude of between 50 and 100 feet, transmitting radar signals into the air designed to fool the Germans into scrambling their fighter squadrons in pursuit of a non-existent enemy.

On the night of November 15, 1944, Landberg took off on what he expected to be a routine. Shortly after take-off, his aircraft lost power. The plane hit the ground, plowing across two fields. The plane was loaded with 4,000 gallons of high-octane fuel and 26,000 rounds of ammunition. It should by rights have exploded; miraculously it didn’t. Landberg’s navigator and best friend, William Lamson, and the left-side waist-gunner Leonard Smith were both killed on impact. But the cockpit in which Landberg was sitting was ripped from the fuselage and catapulted 300 yards from the wreck. Fortunately, seven crew members survived, including 1Lt Landberg.

Landberg had been so affected by the crash that he had never spoken of it, not even to his wife. And it might have passed, forgotten, into history, had it not been for Chris Jellis, a film prop man who lives in Ivinghoe. Jellis’s cousin owns Ford End Farm, where Landberg’s B24 crashed in 1944. For years he had been plowing up bits of the remaining wreckage, including live 50 caliber machine-gun shells, without knowing what they were exactly the wreckage of.

In 1993, Jellis himself picked up a piece of metal bearing a manufacturer’s plate – Ford motor co, Dearborn. He turned detective, becoming in his own words, an ‘a bit of an anorak on the B24’. A local historian told him that America bombers had been stationed at Cheddington. Through military records here and in America he determined the Squadron and names of the crew of the crashed bomber. Dialing every N Landberg in the American phone directories eventually led him to Norman.

Jellis resolved to erect a memorial in honor of the two airmen who had died. On November 15, 2009, Norman joined the only other surviving member of his crew, the tail-gunner George Eberwine – whom he has not seen since the end of the war – at a ceremony to unveil the marble stone at the site of the crash. The unveiling included a dedication by a US Airforce chaplain, Flypast, and wreath-laying.

DUE TO MECHANICAL FAILURE IN WHICH

IN REMEMBRANCE OF THE SERVICE AND SACRIFICE OF

THIS MEMORIAL IS HEREBY DEDICATED ON 15TH NOV 2009. 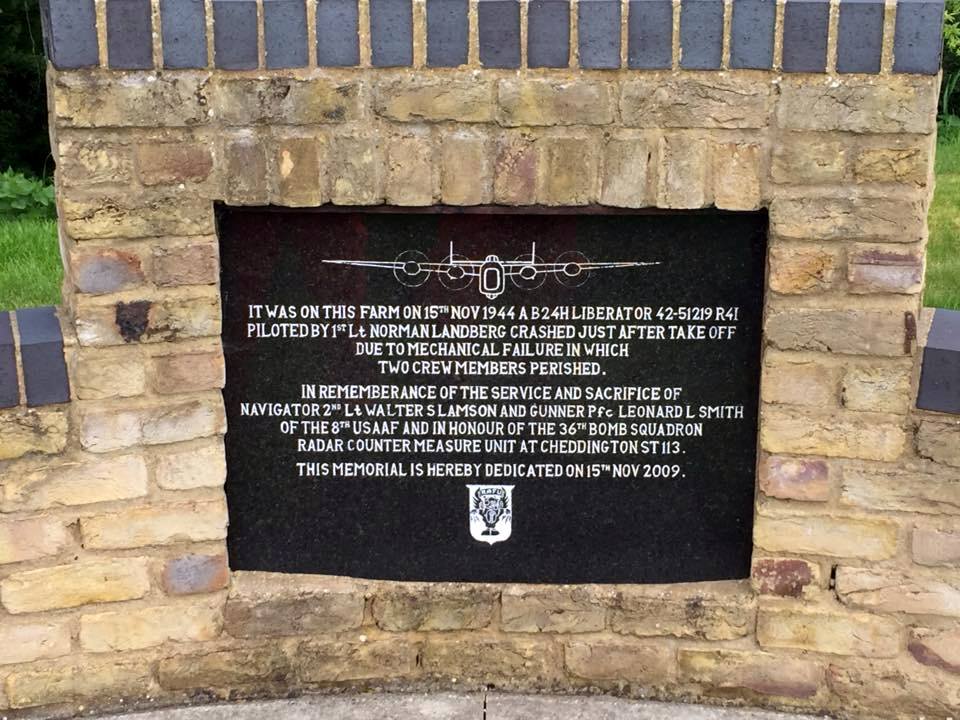