<< Back to Tabogon (Cebu Island) 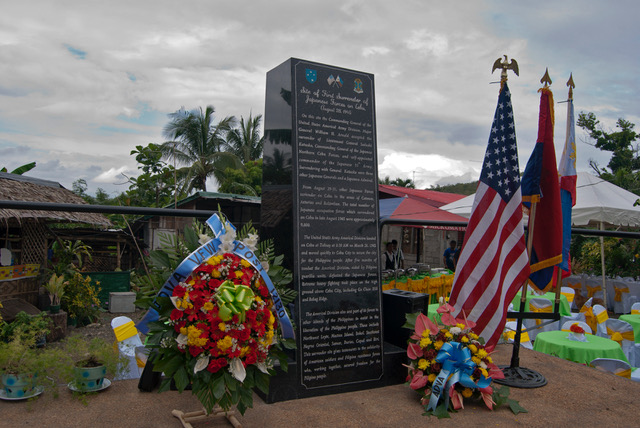 In a landing behind some buildings, not visible from the roadway.

The monument placement at this site commemorates the site on which the Japanese Army forces surrendered to the Americal Division in August 1945.

As World War II came to an end in August 1945, the island of Cebu was still divided. American forces had recaptured the central portions of the long thing island, including Cebu City. Japanese forces had retreated, consolidating in the north. Following the atomic bombing of Hiroshima and Nagasaki, Emperor Hirohito ordered the surrender of all Japanese military forces. Unfortunately, the remaining Japanese troops on Cebu were living primitively on the island, and did not have a working radio. Flyers were air dropped over their positions, indicating that the war was over.  A series of notes was exchanged, pinned to a tree, but the Japanese were skeptical. Finally, they were able to get in contact with their superiors, and confirm that the war was over. Arrangements were made for a formal surrender.  On 28 August, 2600 Japanese soldiers marched out of the hills to an open field near Ilihan. General Tadasu Kataoka presented his sword to Major General William Arnold. The Japanese piled their weapons on the ground, and the war on Cebu was effectively over. Over the next few days, thousands more surrendered. They were rapidly moved to the coast for travel back to Japan.

On this site the Commanding General of the Americal Division, Major General William H. Arnold accepted the surrender of Lieutenant General Sadashi Katooka, Commanding General of Japanese Forces in Northern Cebu and self-appointed Commander of the 35th Japanese Army. Surrendering with General Katooka were two other Japanese Generals and a Japanese Admiral.

From August 29-21 other Japanese forces on Cebu surrender in the areas of Catman, Astrius, and Balamben.  The total number of Japanese occupation forces that surrendered on Cebu were approximately 9800.

The United States Army Americal Division landed at Talisay at 8:30am on March 26, 1945 and moved quickly to Cebu City to secure the city for the Filipino people.  After five months of combat, the Americal Division, aided by Filipino Guerrillas forces, defeated the Japanese. Extremely hard fighting occurred on the high ground above Cebu City including Go Chan Hill and Bagab Ridge.

The Americal Division also sent other parts of its unit to other islands to assist in the liberation  of other  Filipino people.  These include Northwest Leyte, Mactan Island, Bohol, Southeast Negro Oriental, Samar, Burias, Capul and Biri. This surrender site gives testament of American soldiers and Filipino Resistance Forces, who working together, secured freedom for Filipino people. 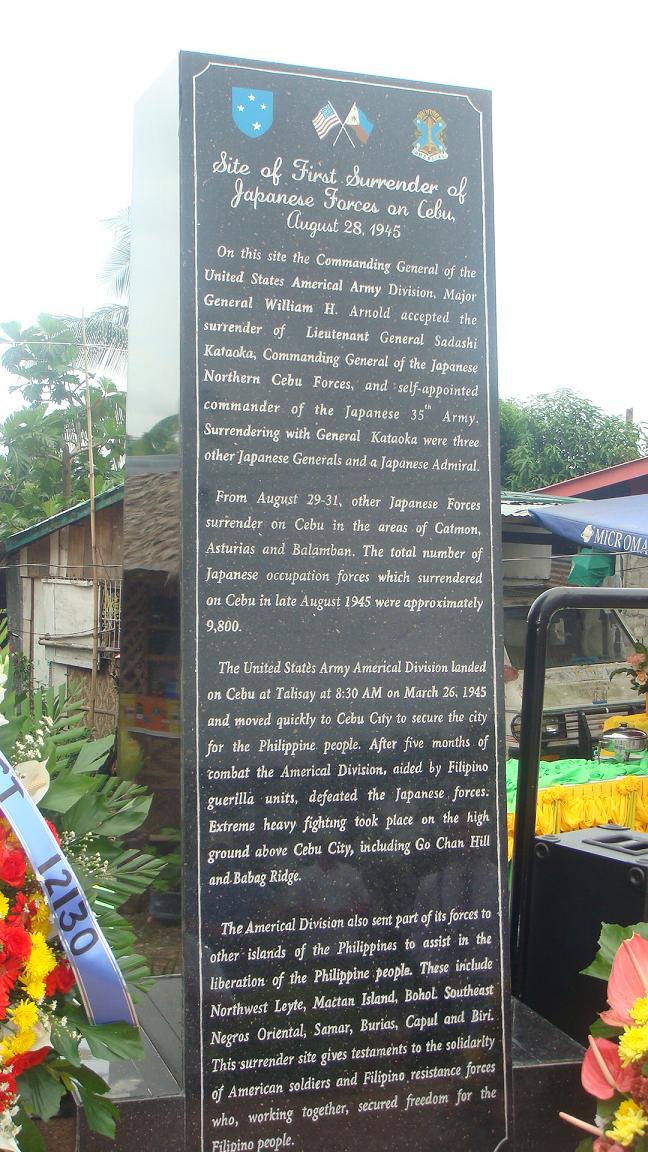