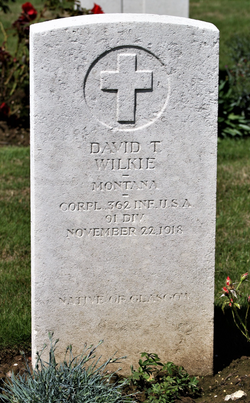 Corporal David T. Wilkie was from Scotland and served in the 362nd Infantry Regiment of the 91st Infantry Division.  He died just after the war, most likely of Spanish Flu and is buried in a Commonwealth War Grave Cemetery.

From the CWGC website: The cemetery at Terlincthun was begun in June 1918 when the space available for service burials in the civil cemeteries of Boulogne and Wimereux was exhausted. It was used chiefly for about 3000 burials from the base hospitals.  The cemetery contains 4378  burials from both WW1 and  WW2,.