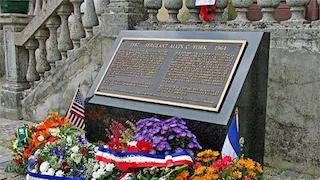 The monument is at the steps of the town hall. Monument This memorial is dedicated to WWI hero, Sergeant Alvin C. York, who built his reputation in Argonne, France. On October 8th, 1918, Sergeant York and 17 fellow soldiers were given the mission to take command of the Decauville railroad. The soldiers misread their map (which was in French, not English) and accidentally ended up behind German lines. A brief skirmish occurred causing confusion, as well as the unexpected surrender of a more significant German force to the 17 Americans. After the Germans realized their superior numbers, German machine gunners on the hill took turned their attention away from their front and on to their own troops. The German machine gunners ordered their fellow soldiers to lie down and opened fire, killing 9 Americans. During the attack, York was ordered to silence the machine gun, which was a successful maneuver. He led the remaining few Americans in the capture of 132 German prisoners.

The monument itself is a rectangular black stone memorial. There is a bronze plaque containing text.