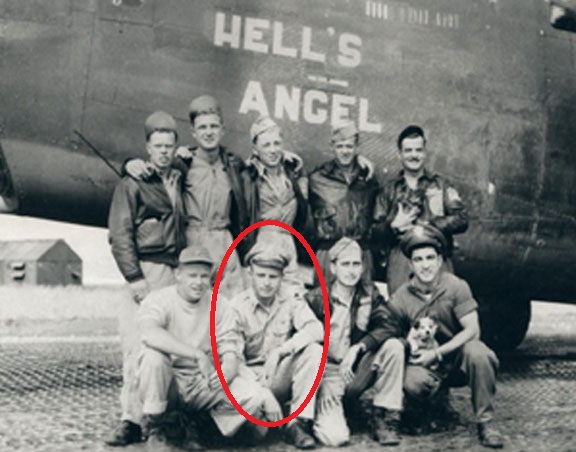 William C .“Bill” Lawrence was born on October 20, 1918 in Little Rock, Pulaski County, Arkansas. He was the son of the Reverend Roland William Lawrence, a Baptist evangelist, and Clara C. Lawrence.

In 1942, Bill joined the military in the wake of the Japanese attack the US Navy Base and Army Air Corps field at Pearl Harbor, Hawaii. He was accepted into the Army Air Corps and served as a B-24 bomber pilot in the United States Army Air Corps.

Captain Lawrence was a highly regarded pilot in his unit, the 831st Bomber Squadron, 485th Bomber Group, Heavy, 15th Air Force, and was revered by his crew for his flying abilities. He and his crew normally flew a bomber named "Hells Angel" but on this particular last mission they were flying a new aircraft that had not yet been named. This mission was over Auschwitz, Poland.

While on their 50th and last mission, the plane they were in took a direct hit from ground artillery fire killing his radio operator Everett MacDonald instantly. The plane lost it's #3 and #4 engines to fire and was becoming impossible to control and keep airborne. Captain Lawrence ordered his crew to bail out. The last man to do so turned to look back over his shoulder and saw where Captain Lawrence and the co-pilot, Lt. Hall, both of whom had been flying the aircraft and fighting to hold it steady so the crew could get away before it started to go into a spin, had joined the men on the catwalk to bailout. That crewman, top turret gunner, TSgt Vernon Christensen, said that Captain Lawrence was looking at him as Christensen jumped from the plane (another account states that Lt. Blodgett was the last out and the plane had started to spin at that time causing him to almost not get out). Right after that the plane went into a spin and nosedived towards the ground. Due to the centrifugal force created by the spin, no one else could get out. Five of the crewmen were able to safely land on the ground after jumping from of the plane with six dying in the crash. The plane crashed near the village of Zygodowice.

Reports gathered from Polish civilians who observed the crash state that one of the crewmen who crashed with the plane was still alive when the Germans arrived. He was seen on the ground and making jerking motions. A German sergeant came up to the man and struck him in the head with his rifle butt, killing him. The bodies were stripped of their belongings and uniforms. The villagers buried the dead Americans and, even though verbally abused and threatened by German soldiers, decorated those graves with wreaths daily.

The dead airmen were buried near the crash site. The local citizens marked the grave with a wooden cross and a small fence. In 1947, Zygodowice was visited by the American government searching for American graves in Poland. The remains were disinterred with some moved to the American Military Cemetery in Belgium and some to the US. After the war had ended, it was decided to erect a memorial dedicated to Captain Lawrence and his crew. This remembrance was not liked by the communist regime in power there after the war and probably was the main reason the secret police searched the houses in Zygodowice and the surrounding area. Most of the bomber's artifacts were confiscated and it was thought that the plane would be soon forgotten. The communists though, were incorrect with this thought. The tragic story of the young Americans was all but forgotten for almost 50 years. The remembrance was revived thanks to Zygmunt Kraus, who organized the exhibition in Wadowice and initiated the erection of a memorial in 1991 at the crash site. Today there is a small museum in Zygodowice, dedicated to the US Army Air Corps in general and specifically to Captain Lawrence and his crew. The museum contains artifacts from the crash site and was built and owned by Kraus.

(The asterix denotes men who were from the original Hell's Angel crew that started out together).