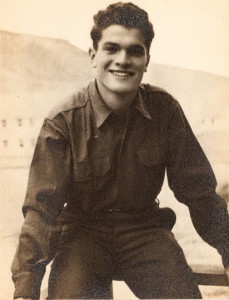 PFC Goldstein was born in Fiume (Rijeka), in present day Croatia, on March 16, 1923. He lived and studied in Trieste and in 1938, with the passing of Italian Racial laws, being Jewish, he was stripped of his citizenship. In 1939, he emigrated with several cousins to the United States where he worked as a barman and in a factory. He eventually found a job with Mount Sinai Hospital and studied in a local university. While he was safe in his new country, but felt he needed to do more. In 1943 he volunteered for the Army and assigned to the 10th Mountain Division where he learned to snowshoe, ski and be a good combat medic. With the 10th Mountain Division, Andrea (he called himself Andrew) returned to help free Italy, the country that discriminated against him. On February 18, 1945, he was awarded the Bronze Star for his heroic actions on Monte Cappel Buso. A few days before his 22nd birthday, On March 5, 1945 he was killed in action at Sassomolare, near Castel d’ Aiano. Sergeant Norman D. Worley, his fellow soldier and author of the poem dedicated to him, described him as a courageous, passionate person who did not hesitate to challenge dangerous situations in order to help those in need. Andrew's story, along with those of two of his cousins who had different fates, is told in the book ‘Ci sarebbe bastato’ (It would have been enough for us') by Silvia Cuttin, Epika Edizioni 2011. POEM: The Saga of Andrew Goldstein: Medic B – 86th It was a cold February 22nd morn in Forty-Five, in the Apennines, on Pizzo di Campiano peak. A rocky shale “KNOB”, one hundred feet by thirty-five, On a twelfth of an acre, 88s’ and G.I.s’ played hide-and-seek. This part of Riva Ridge acted as a natural shield For 85th-87th Troopers on Mount Belvedere. The troops of B-86th and A-Anti-Tank must not yield. Observed enemy fire cannot be tolerate from here. Ninety Germans attacked at seven twenty-five. The onslaught grew into a five hour fire fight. The defending 10th Mountaineers numbered thirty-five. War’s “pruning hock” would claim a heavy toll ere night. In the Navy and Marines, wounded men cry out “Corp-Man”. In the Army, the woeful call for aid is “medic”. For selflessness, one of these has to be in the van. Andrew Goldstein, B-86th, what ingrained mores made you tick? Medic! medic! Up! Out of your hole: no hesitation, Into the mix of mortar – shell fire and grenade. All this held for Andrew grim determination. That every call – had to be answered – must be made. Medic! medic! Thru the fire, cordite skunks the air. Short rounds! Stop that fire! There lie five: check ‘em out. A lesser man would give up: quit in despair, But Andrew won’t let sparks of Life be snuffled out. Quickly, from one to another, Andrew does his thing. Deftly, he applies the sulphs and tourniquet tight. The cacophony of War has his ears a-ring. Dirt, debris rise darkly high and day is as night. For some the fight is final, nothing can be done. On the scope, Digitale and Spiewak mutely wait. In a foxhole, on the front line, lies Carl Casperson. On Cappel Buso, Selwyn Alexander met his fate. The fights over. No rest for the Medic with no fear. It’s time to check the wounds, hastily tended. Make decisions. Who stays – who goes to the rear. Replacements will be needed for those expended. Some will walk to the D-126th Tramway. Litter bearers will need four to ten hours for their load. But once on Fred Nagel’s six tundre yard cableway, Five minutes down, you are hospital bound to the road. In War, there is no lack of brave men at the front. Stronger than a brother’s love is the noble trend. As these heroes step forward to take the brunt, and unflinchingly lay down their lives for a friend. As one who had Andrews’ care in answer to a call, A braver man, I have never seen – friend or foe. twelve days later, at Sassomolare, Andrew gave his all. Some one in heaven cried “Medic” and Andrew Goldstein just had to go. Norman D. Worley – T/Sgt. Co. A 10th Mountain Anti-tank