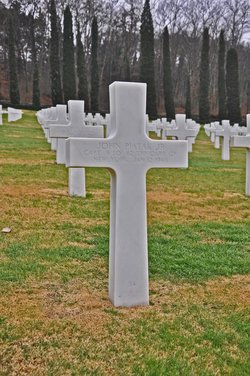 John Piatek served in the 8th Squadron of the 62nd Troop Carrier Group. He was born in 1918 and was from Erie County, New York. On January 12, 1944, he was a crewmember aboard a Special Operation C-47 Skytrain ( 41-18681) with the mission of air dropping soldiers of the British 2nd Regiment of the Special Air Services (SAS) team to attack a German airfield (Sant Egidio Airfield outside Peruguia, Italy). After successfully dropping the six-person SAS team, the C-47 Sky Train crashed on Monte Tezio resulting in complete loss of life. The Crew consisted of: Nowotny, Raymond A ~ Lt. Col, Pilot, CA McNeil, J J, Jr ~ Maj, Co-Pilot, TX Piatak, John, Jr ~ Capt, Navigator, NY Nocentini, Joseph L ~ Capt, Surgeon, PA Holmes, Ross A ~ T/Sgt, Engineer, OK Singer, Saul ~ Sgt, Radio Operator, NY From Find a Grave: Son of Mrs. Mary G. Piatak who resided in Kenmore, New York. John served as a Captain & Navigator on C-47 #41-18681, 8th Squadron, 62nd Troop Carrier Group, U.S. Army Air Forces during World War II. He resided in Erie County, New York prior to the war. He enlisted in the Army Air Corps on November 6, 1941, prior to the war, at Fort Jackson, Columbia, South Carolina. He was noted as being employed as a Teacher and also as Single, without dependents. John was "Killed In Action", with five other crewmen, when his C-47 was shot down and crashed near Monte Tezio, Italy during the war. He was awarded a "Distinguished Flying Cross", Air Medal, and a Purple Heart. The American crew had just completed an air-drop of British troops near Lake Trasimeno, where they were sent to sabotage German war planes. After making the drop, the aircraft was heading back to an air base in southern Italy. Service # O-790905