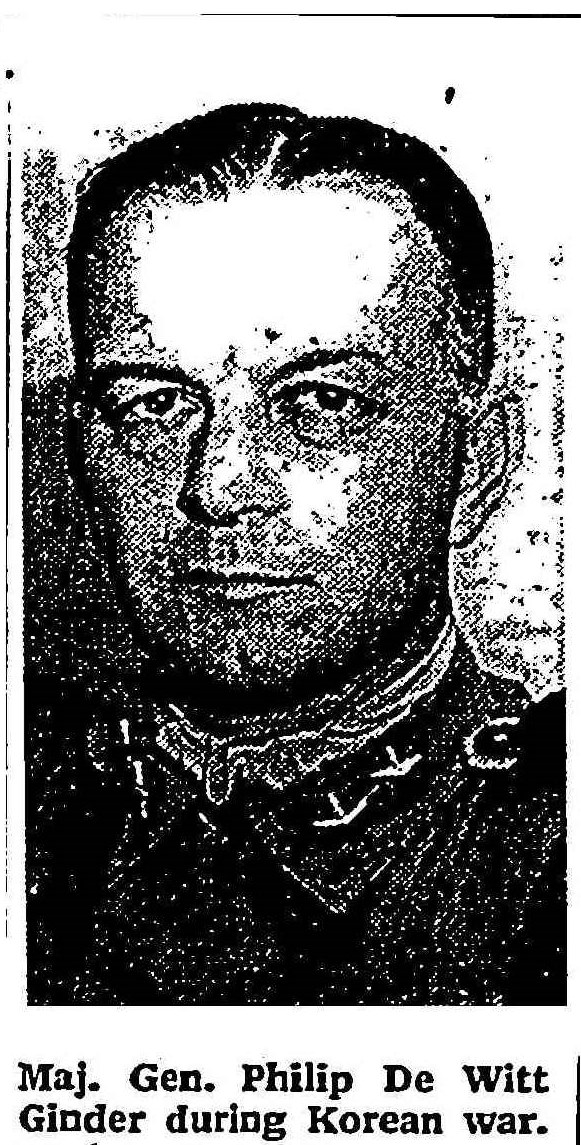 Philip Ginder born on September 15, 1905 and was from Plainfield, New Jersey. He served in WW2 and Korea and retired as a Major General. During WW2, among other jobs, he commanded the 9th Infantry Regiment of the 2nd Infantry Division.

Philip DeWitt Ginder was born on 19 September 1905 in Plainfield, NJ.
Ginder graduated from the U.S. Military Academy in 1927 and was commissioned as a Second Lieutenant of Infantry.
On D-Day, 6 June 1944, Colonel Ginder was among the first ashore during the Normandy beach landings. On 28 November 1944, he was in command of forces that captured the German town of Hürtgen as part of the Battle of Hürtgen Forest. For this action he received the Distinguished Service Cross. By the end of World War II, he was in the Czechoslovakian town of Rokycany near Pilsen.
From 1946 to 1949, Ginder attended the newly-established National War College in Washington and, after graduation, served in the Far East on the staff of General of the Army Douglas MacArthur. He also held important posts with the 2d Infantry Division, and with the Sixth Army in San Francisco, CA. In 1949, he served as the Senior U.S. Military Attache in Prague, Czechoslovakia, where he saw at close hand the methods by which the Communists wage "cold" war.
Ginder commanded the Defenders of Berlin, the 6th Infantry Regiment (1951-52); the 45th Infantry ('Thunderbird') Division in Korea (1953); the 37th Infantry Division at Fort Riley, KS, (1954); and served as Commanding General of the Fifth U.S. Army, Headquartered in Chicago, in 1955. He went to Korea as a Colonel and, in less than two years, was promoted to the two-star rank of Major General , making him the youngest American general to command a combat division in Korea. His service in Korea included nearly 18 months spent north of the 38th parallel.
After his final post as Deputy Commander of the First U.S. Army, at Governor's Island, NY, Major General Ginder retired from the Army in 1963.
In Retirement:
After his retirement from the Army, he became president of the Brazilian-American Export Company, and a director of many important industrial organizations.
Medals, Awards and Badges:
Distinguished Service Cross; Distinguished Service Medal; Legion of Merit; Bronze Star Medal with Bronze Oak Leaf Cluster; American Defense Service Medal; American Campaign Medal; European-African-Middle Eastern Campaign Medal with 4 Service Stars and Arrowhead Device; World War II Victory Medal; Army of Occupation Medal; National Defense Service Medal with Bronze Star; Korean Service Medal; United Nations Korea Medal; Combat Infantryman Badge;
Foreign Awards:
Croix de Guerre 1939-1945 with Palm; Czechoslovak Order of the White Lion, 3rd Class; Czechoslovak War Cross 1939-1945; Soviet Order of the Patriotic War, 1st Class;
Distinguished Service Cross Citation:
The President of the United States of America, authorized by Act of Congress, July 9, 1918, takes pleasure in presenting the Distinguished Service Cross to Colonel (Infantry) Philip DeWitt Ginder, United States Army, for extraordinary heroism in connection with military operations against an armed enemy while Commanding an Infantry Company of the 121st Infantry Regiment, 8th Infantry Division, in action against enemy forces on 28 November 1944, in Germany. Colonel Ginder personally led his reserve company of his battalion in an attack against a strongly defended town, when other attacking companies were pinned down by intense enemy small arms and mortar fire. With complete disregard for his own personal safety and armed only with his pistol and a hand grenade, Colonel Ginder courageously moved forward leading his men into the town despite the fierce enemy resistance. During the bitter house-to-house fighting that followed, Colonel Ginder through his personal courage and leadership, set an inspiring example which gave added encouragement to his men. Colonel Ginder's courageous actions, personal bravery and zealous devotion to duty exemplify the highest traditions of the military forces of the United States and reflect great credit upon himself, the 8th Infantry Division, and the United States Army. General Orders: Headquarters, Ninth U.S. Army, General Orders No. 15 (1945)
Family:
Ginder was married to Jean Dalrymple, head of the City Center Drama and Light Opera Companies, on 1 November 1951. They met while she organized United States participation at the Berlin Arts Festival on behalf of the U.S. Department of State. The couple lived in New York City and Danbury, CT.
Death and Burial:
Major General Philip DeWitt Ginder died at age 63 on 7 November 1968 in Trafalgar Hospital after suffering a cerebral hemorrhage. He is buried at the United States Military Academy Post Cemetery in West Point, NY.