<< Back to Hiroshima Takara Building 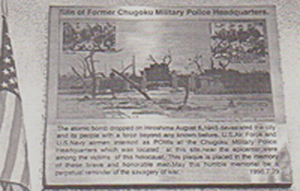 At the back (north) entrance to the building.  Go down the narrow street behind the building to find it, or go through the  Chuco-Shintaku Bank out to the street behind.  The plaque hangs over a doorway in an alcove.
Plaque A plaque honoring the memory of the American POWs who were killed by the Atomic Bomb in Hiroshima, Japan.  The plaque was installed in 1999 by A-bomb survivor Shigeaki Mori.  At least 12 American POWs, crews of American aircraft that went down in the area, were killed by the bomb or its aftereffects.  They were being held at the Kempai-Tai Military Police station near the epicenter of the blast.

The Atomic Bomb devastated the city and its people with a force beyond any known before.  US Air Force and US Navy airmen interned as POWs at the Chugocu Military Police Headquarters, which was located at this site, near the epicenter, were among the victims of this holocaust.  This plaque is placed in the memory of these brave and honorable men.  May this humble memorial be a perpetual reminder of the savagery of war.