<< Back to Cabanatuan- POW Camp 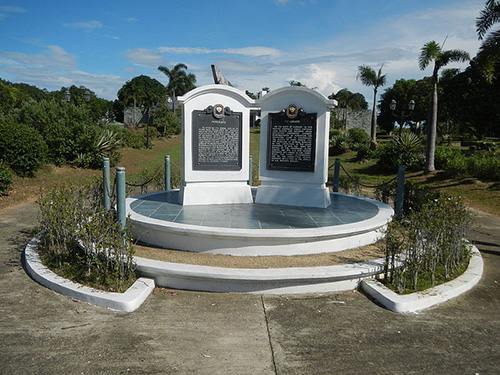 Immediately adjacent to the Cabanatuan American Memorial (which is administered by the American Battles Monument Commission {ABMC} in an open field just before entering the ABMC site.

Two identical markers from the National Historical Institute, one in English, the other in Filipino, mounted on a circular concrete base recounting the exploits of Filipino guerillas supporting US Army Forces.

The Cabanatuan American Memorial was erected by the survivors of the Bataan Death March and the prisoner of war camp at Cabanatuan in the Philippines during World War II. It is located at the site of the camp and honors those Americans and Filipinos who died during their internment. ABMC, recognizing the significance of this memorial, accepted responsibility for its operation and maintenance in 1989.

This memorial commemorates and honors the Philippine units which participated in the 'Great Raid' in January 1945. They played a major role in the success of the joint US/Philippine operation.

The Filipino forces included Squadron 201 led by Captain Juan Pajota and Squadron 213 led by Eduardo Joson. They supported US Army forces which included the 6th Ranger Battalion and the Alamo Scouts.

This is a key timeline form the ABMC website to better understand the background of this operation:

April 9, 1942: 75,000 Filipino and American soldiers, prisoners of the Japanese, began their infamous march out of Bataan to Camp O’Donnell in Tarlac, Central Luzon. Thousands were killed or died enroute.

MID-1942: The Japanese transferred 6,000 American POWs from Camp O’Donnell to the Cabanatuan vicinity. The POWs were assigned to work details and hard farm labor. Almost 3,000 died from executions, disease, beatings and starvation.

October-November 1944: After the American landing in Leyte, the Japanese transferred some 2,000 of the Cabanatuan prisoners to vessels sailing to Japan. Unmarked, many of these ships were sunk by US aircraft and submarines. About 500 POWs remained in Cabanatuan.

January 9, 1945: Supported by the U.S. and Australian navies, the U.S. Sixth Army made landings on the shores of Lingayen Gulf.

January 28-30: 6th Ranger Battalion, reinforced by the Alamo Scouts and Filipino guerillas, infiltrated 27 miles through the Japanese-held area southeast of Guimba. They forded the Pampanga River and established positions near the Cabanatuan camp.

This event is remembered in the 2005 movie, “The Great Raid” based on the book by Hampton Sides: "Ghost Soldiers: The Epic Account of World War II's Greatest Rescue Mission "

For other POW Camps Memorials and historic raids to liberate them see this website:

The text on one marker is in English and on the other in Tagalog.  The English version reads:

THE BATTLE OF CABU BRIDGE AND

THE BLOCKADE AT BANGAD RESULTED

IN THE LIBERATION OF 516 ALLIED

PRISONERS OF WAR.  THE JOINT OP-

RATION OF THE GUERRILAS, ALAMO

SCOUTS AND THE U.S. 6TH RANGES

MUCCI THIS EVENT IS CONSIDERED

ONE OF THE SUCCESSFUL RESCUE

MISSIONS OF ITS TYPE IN THE ANNALS 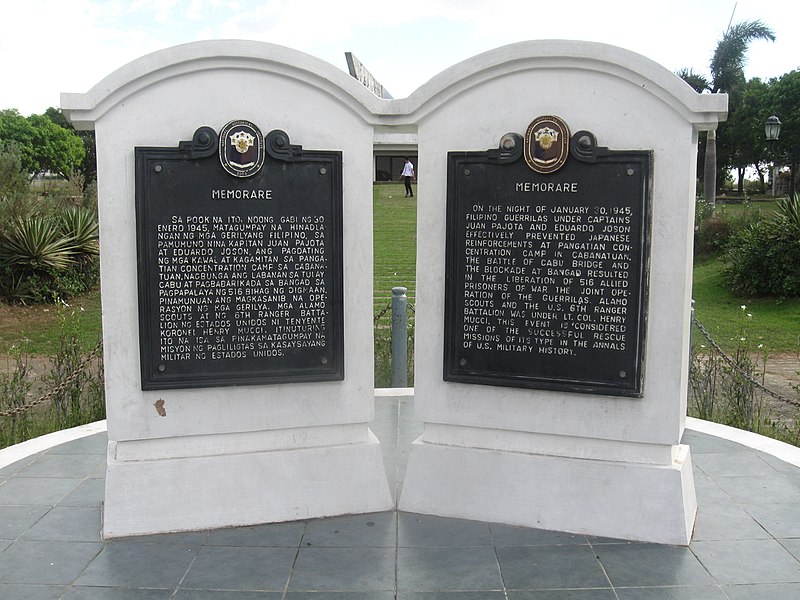 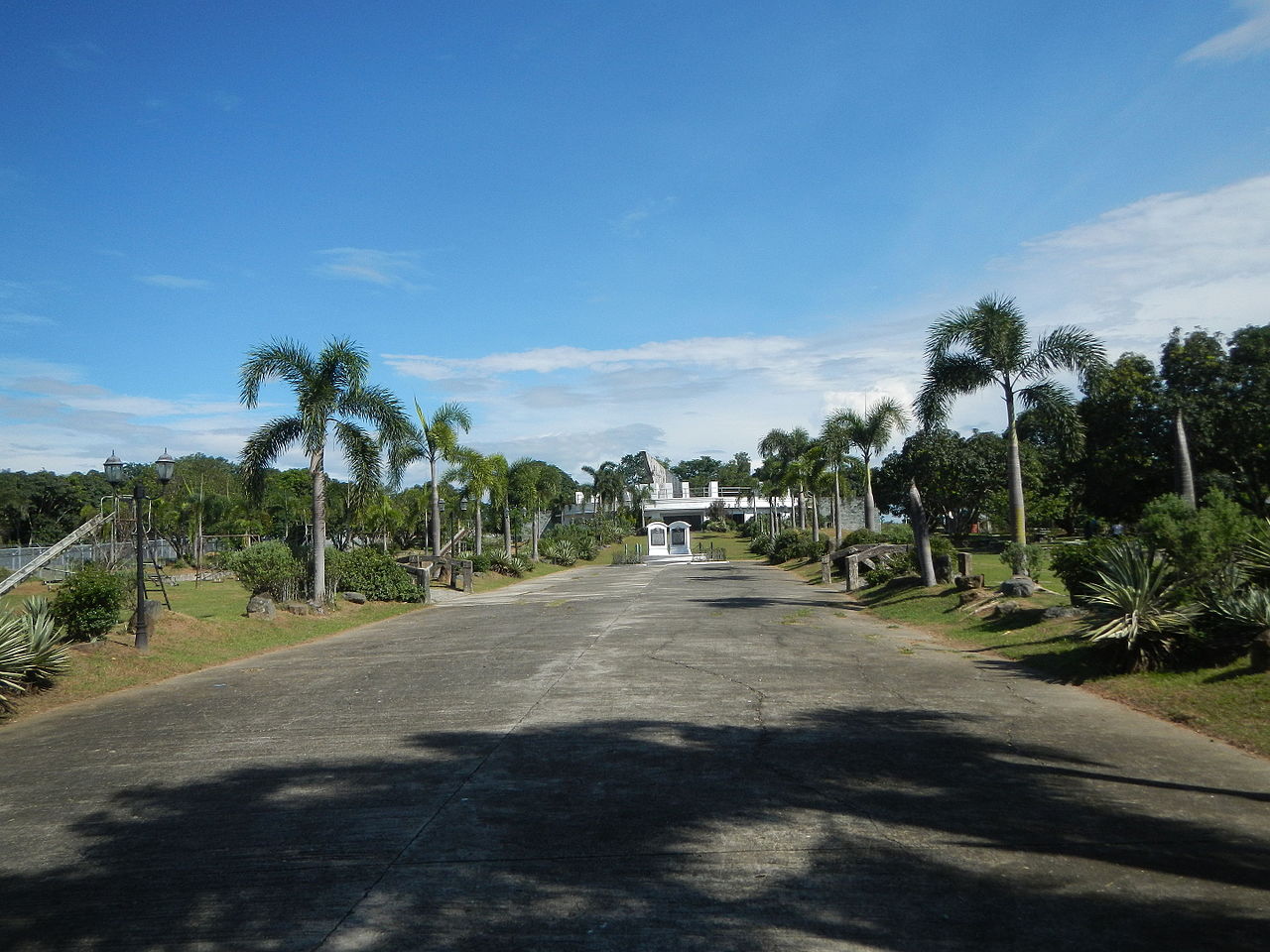 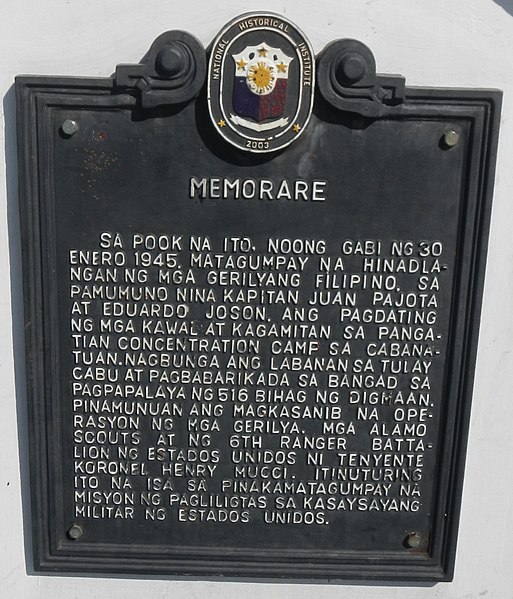 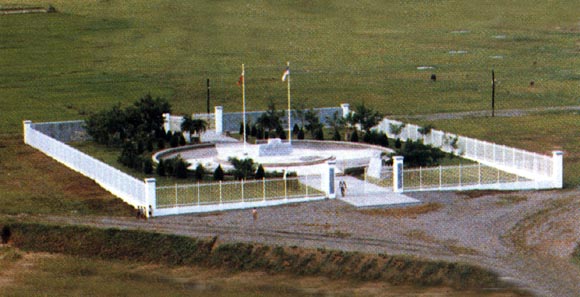