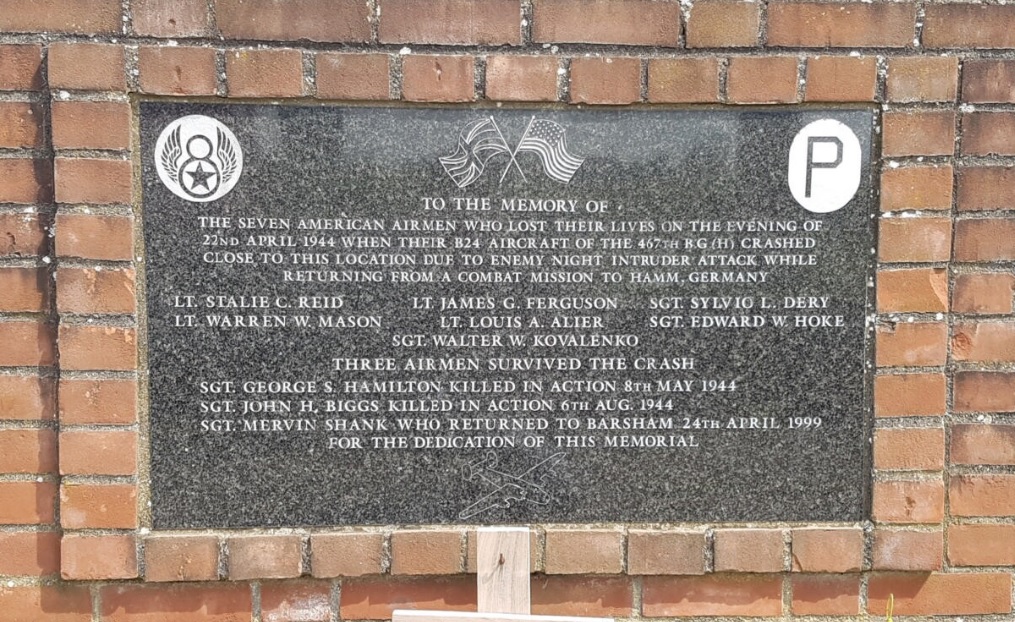 The plaque is mounted on the lower walls near the edge of the road. Plaque

A black stone plaque mounted on red brick wall, printed in white and English text. On the top left-hand corner is the insignia of the Eight Air Force and crossed Union flag and American flag on the top center. On the top right-hand corner is the aircraft tail identification and an outline of B-24 plane on the bottom. The plaque commemorates ten American airmen of the B-24 #42-52445 plane which crashed in the area.

The Night of the Intruders, on 22nd April 1944 when American bombers suffered their highest ever loss to German intruders. The German bomber fighters followed the air armada home after the raid, picking individual bombers off on their return over Europe and then over England as the American force struggled to land.

Over a period of only twenty minutes, ten aircraft, nine of them B-24 Liberators, were shot down and 61 men killed for the loss of only two Me 410s.

TO THE MEMORY OF

CLOSE TO THIS LOCATION DUE TO ENEMY NIGHT INTRUDER ATTACK WHILE

RETURNING FROM A COMBAT MISSION TO HAMM, GERMANY

FOR THE DEDICATION OF THIS MEMORIAL