<< Back to Eye Town Hall 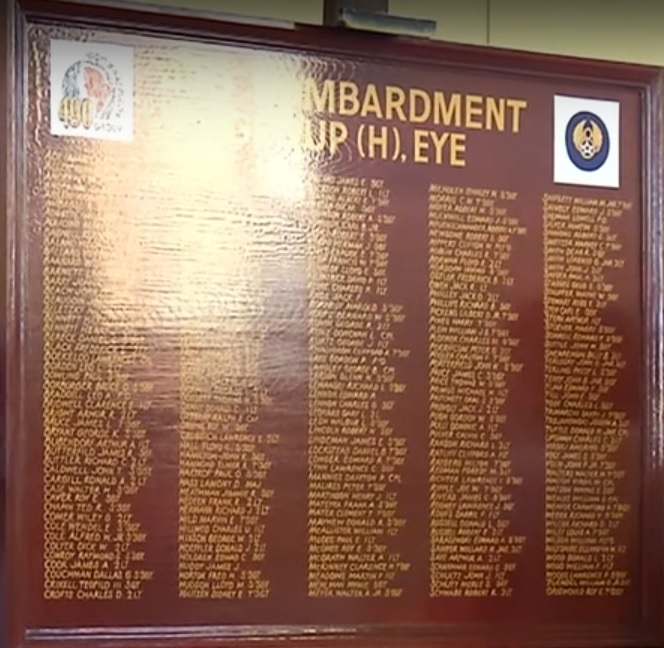 Inside the town hall.
Marker

A large wooden board with the insignias of the 490th BG and 8th Air Force in top corners, showing dedication and 4 columns of names in gold-colored, uppercase, painted lettering. The project was set up by seven local residents in an effort to raise funds for a permanent memorial in the town to the lost US airmen. The memorial was dedicated in August 2015.

The 490th Bombardment Group was activated at Salt Lake City Army Air Base, Utah on 1 October 1943, with four squadrons, the 848th, 849th, 850th, and 851st Bombardment Squadrons assigned. The 848th through 850th Squadrons were activated with the group at Salt Lake City, while the 851st, a former antisubmarine squadron that provided the group's cadre, was located at Mountain Home Army Air Field, Idaho.

In December, group headquarters and the three squadrons at Salt Lake City moved to Mountain Home, where they began training with Consolidated B-24 Liberators. The squadrons left their training base on 9 April 1944 for the European Theater of Operations. The group's ground echelon departed the port of embarkation at Camp Shanks, New York, sailing on the SS Nieuw Amsterdam on 11 April and arriving in the United Kingdom on 25 April. The air echelon flew its planes along the southern ferry route beginning on 12 April.

The group arrived at RAF Eye, its combat station, on 28 April. However, before the group could fly its first combat mission, the 850th Squadron was reassigned to VIII Air Force Composite Command to fly Operation Carpetbagger missions with the 801st Bombardment Group (Provisional). The remaining three squadrons of the group began combat operations on 31 May 1944. The group's initial missions were flown to prepare for Operation Overlord, the invasion of Normandy, as the squadron concentrated on targets in France. It supported the landings on D-Day and attacked coastal defenses, airfields, rail lines, and vehicles near the landings. It flew close air support missions to assist British forces near Caen in July and American forces near Brest in September. It was withdrawn from combat on 6 August 1944, to convert to the Boeing B-17 Flying Fortress as the 93d Combat Bombardment Wing transitioned to make the 3d Bombardment Division an all B-17 unit. While the group was transitioning aircraft, the 492d Bombardment Group replaced the 801st Group in the Carpetbagger mission on 12 August. The 850th Squadron transferred its crews and B-24s to the 492d Group and returned to the 490th on paper to be included in the change to the group's new bomber.

Once the transition to the B-17 was completed on 24 August, the squadron concentrated on strategic bombing, attacking oil refineries, airfields, marshaling yards, and factories manufacturing aircraft and armored vehicles. It participated in raids against Berlin, Cologne, Hamburg, Hanover, Kassel, Merseburg, and Münster. The 490th flew its first mission with the B-17 on 27 August to Genshagen, Germany to attack the BMW engine factory although the mission was aborted due to weather. On occasion, the squadron was diverted from the strategic bombing campaign. It attacked enemy lines of communication during the Battle of the Bulge from December 1944 through January 1945. In the last month of the war in Europe, it carried out interdiction missions to support advancing ground forces. The squadron's last combat mission was flown on 20 April 1945.

(List of names, not by inscription order and number)